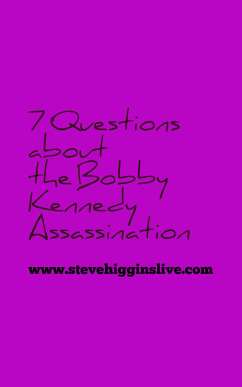 I’ve seen and heard a lot of shocking events on television over the years. I remember hearing about the death of Princess Diana one Sunday morning while I waited for the kettle to boil for a morning cup of tea. I was watching TV when 9/11 happened and watched with horror as the second tower was hit by an aircraft. The very first tragedy I learned about from the television though was the shooting of Bobby Kennedy. I was only eleven years old then in 1968 but I knew exactly who Bobby Kennedy was and that his brother, the President, had been assassinated five years before.

Bobby Kennedy was at the Ambassador Hotel in Los Angeles on the 5th of June, 1968. He was celebrating his victory in the California primary the previous day. He made a speech to his campaign supporters then turned away from the rostrum. He was due to meet the press in another part of the hotel and was led away through the pantry area at the back of the hotel. As he passed through the corridors numerous people approached to shake hands with the senator and pass on their best wishes. One man stepped forward though with a gun in his hand. His name was Sirhan Sirhan. He was ahead of Bobby and he pushed forward and began firing his Iver-Johnson eight shot revolver. He was quickly grabbed and pushed down onto a nearby table. The gun stayed firmly in his grasp and he continued to fire as more people assisted in trying to subdue him. Only when all eight shots were fired was the revolver finally wrestled from his grasp. Bobby Kennedy had been injured in the head and a busboy, Juan Romero, dropped to his knees to help. He pushed rosary beads into Bobby’s hands and the injured Senator was heard to ask ’is everyone safe?’ 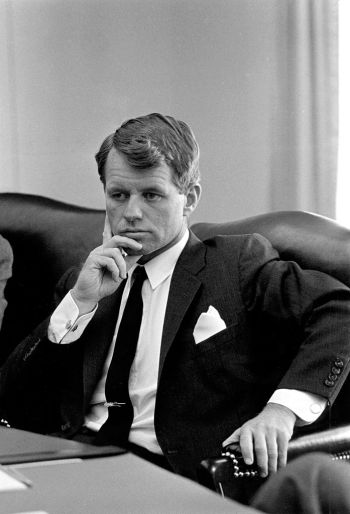 Bobby Kennedy died the next day. It’s fairly probable that had he lived he would have succeeded Lyndon Johnson as the next President of the United States. He was a man clearly concerned about the war in Vietnam, not only the war itself but the effect it was having within the United States so one of his priorities would surely have been ending the war. J Edgar Hoover, head of the FBI had been given a special dispensation by Johnson to stay at the head of the bureau despite having reached the mandatory retirement age. Would Kennedy have retired Hoover and put his own man in charge? Would he have reopened investigations into the death of his brother John, the assassinated President? Either way, these are only speculations. Bobby died the next day.

1. The autopsy showed that Bobby was hit in the back of the head at point-blank range. The fatal shot was fired in an upward direction. How could this be if Sirhan Sirhan was ahead of Kennedy and not close enough to inflict a point blank wound?

2. Scott Enyart, an amateur photographer was in the pantry and photographed the shooting. His film and photographs could answer many questions but they were confiscated by the LAPD. Later he sued the Police department for the return of his pictures but the Police claimed they had been routinely destroyed. What happened to them? Why was photographic evidence relating to the death of a major figure in the US destroyed?

3. Sirhan Sirhan had a number of notebooks. They were filled with page after page of notations like ’RFK must die.’ ‘Robert Kennedy must be assassinated.’ Why did he write these things? Were they part of hypnotic techniques that compelled Sirhan to shoot Bobby Kennedy?

4. Who was the girl in the polka dot dress seen leaving the hotel with a companion after the shooting and boasting that they had killed Kennedy?

5. Why was witness Sandra Sorrano forced to change her story about the polka dot dress girl during an aggressive interview with the FBI?

6. Sirhan Sirhan fired an Iver-Johnson eight shot revolver at Kennedy and discharged all eight bullets. In 1988 examination of an audio recording made of the assassination by reporter Stanislaw Pruszynski revealed thirteen gunshots rather the eight fired by Sirhan. Who fired the other five shots?

7. On August 21, 1968, less than two months after the assassination, 2400 photographs from the original investigation were burned, in the medical-waste incinerator at LA County General Hospital. Other records were also destroyed. Why?

When I heard about the shooting of Bobby Kennedy in 1968 I went out into the back yard of our home in the suburbs of Manchester and said a prayer for him. When he died the next day I was stunned, feeling a personal loss despite being an eleven year old English boy living a thousand miles away from the United States. In the USA itself, thousands of mourners lined the path of Kennedy’s funeral train as it wound its way towards Washington where Bobby was buried beside his slain brother, the President, in Arlington National Cemetary.

Recently Robert Kennedy Jr met with Sirhan Sirhan in a California State Prison and declared he now supports calls for a reinvestigation of the murder. Read more about this in an interesting article in the Washington Post by clicking here.

If you liked this blog, why not try my book? Click the links at the top of the page for more information!

2 responses to “Seven Questions about the Bobby Kennedy Assassination”