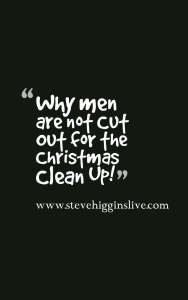 Every year, round about October, when the weather gets colder and leaves are dropping frantically from trees, I always think to myself, ‘this would be a great time to start off my Christmas shopping!’ Yes, I think that every year and every year I never do it.  A similar thing happens with blogging. I think to myself, is it time to start off a few drafts for some  Christmas style blog posts? Yes it is. Do I do it? Well, in this case no. Anyway, perhaps now you get the picture and understand why I’ve had to resort to posting this revised blog post from last Christmas . .

Men are just not cut out for cleaning. OK, it’s a fact. I’m not being sexist or anything but there it is, just a cold hard fact. It’s just not in the male make up. Women are far better qualified to do the job. Here’s an example. I remember one far off Christmas spent with my former wife in our small home in Newton Le Willows. I had some time owing me so I had taken a few days off after Christmas. It had not been a great Christmas as it was the first one since my wife’s mother had died and she had sadly put the previous year’s Christmas card from her mother in pride of place right on the top of the TV.

Anyway, everyone was getting used to going back to work and there was me, who had worked during Christmas, knackered, worn out and ready for a break. I spent one day with my brother having a nice post-Christmas drink in Manchester and the next day I was relaxing, catching up on some TV of the type hated by my wife, yes, sci-fi stuff, Star Trek, black and white films and so on and then a revelation came to me. What if I took down the decorations, got rid of the tree, and chucked out the rubbish? There were piles of wrapping paper and empty bottles about and so on. I could actually come out of this looking good for once. Anyway, there and then I just got stuck straight in. I took the tree down, packed away all the ornaments and decorations and put the box back in the loft. The tree was chopped up and placed in the correct bin, the green one.

All the papers, wrapping paper and empty chocolate boxes and stuff were all removed and placed in the paper bin, along with the old Christmas cards. (Don’t want to upset those hard-working bin men by putting stuff in the wrong bins do we?)

After that a quick hoover up and a sort out of the furniture, all put back in its proper place.

Well, I think I worked up a bit of a sweat there as I remember. Great! Time now for a well-deserved cuppa, a bacon butty and get that black and white movie I recorded the other day cranked up.

As I sat there watching Ronald Colman I could hear the sound of the bin men reversing down the avenue. Yes, my trusty van was on the drive, well out of the bin wagon’s way. (I don’t want to cast a slur on the bin wagon driver but accidents had been known to occur. And there was that incident last year when my next door neighbour had the effrontery to park a huge transit van in the road making access difficult for the bin wagon so, well they just refused to come up the drive and empty our bins.) I had placed all the bins down by the end of the drive just within easy picking up distance for the bin men. (Can’t have them walking all the way up the drive to get the bins can we?)

Just then my wife came in through the door, I stood there foolishly thinking she would be happy and waiting for the praise that was bound to come my way. I hadn’t spent my day self-indulgently doing ‘my’ stuff. I had cleaned and tidied. I had helped. Hadn’t I?

My wife took one look at the tidy lounge then looked at me and said in a sort of scary accusatory sort of way: “What have you done?”

Well, I thought it was pretty obvious what had been done but just then the reversing horn of the approaching bin wagon set off a warning bell. What was wrong? The tree was in the correct bin. The plastic stuff and empty bottles in the glass and plastic bin. The paper stuff, the Christmas cards were all in the paper bin. The Christmas cards . .

I legged it outside just in the nick of time to dive into the paper bin just as the binman was about to empty it. Sprawled across the bin I rummaged frantically through the cardboard and wrapping paper and retrieved my late mother in law’s card from certain destruction.

‘Afternoon’ I said nonchalantly to the bin men. They just looked at me with that ‘it’s that nutter from number 4’ look on their faces. Back inside my wife grabbed the card from my hand with a lethal black look and it was then that we became aware of a certain amount of what appeared to be tomato soup that had somehow attached itself to the card. Now, where that had come from I do not know, I had not even eaten tomato soup that day (although perhaps I did throw a used tin of the stuff in the rubbish.) Oh well, at least my quick thinking had rescued the card!

So, that was that, my good deed had backfired and there was I, thinking I had helped but the fact of the matter is I hadn’t helped at all. I should have just left the tidying up to her then she could have moaned at me for sitting on my behind watching TV all day and everything would have been OK and the card that was a tangible connection to her late mum at Christmas would have been safe and free from tomato soup stains.

Anyway, think on male readers. If you are considering cleaning up over Christmas, think again!

If you liked this post, why not consider buying my book? Click the links at the top of the page for more information. Thanks for looking in and have a great Christmas!

4 responses to “Why Men are not cut out for the Christmas Clean up!”