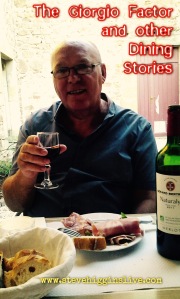 I really do love dining out. I think it’s one of life’s great pleasures, not that I’m a food gourmet or anything, in fact I’ve got pretty simple tastes in food. Give me a nice bottle of red, tasty food and good service and I’m a happy man.

Some years ago Liz and I used to frequent a lovely Italian restaurant in St Annes. It was a great place. It was only small and a little basic and I got the impression that in a former life it used to be a small shop. It was called, well, I won’t say the name but the owner was a guy called, actually, I’m not going to say his name either.

It was a lovely rustic place and when it was quiet the owner would say to me, ‘Steve, tell me what you want, whatever it is I’ll make it, even if it’s not on the menu. If I have the ingredients, I’ll make it for you.’ That was rather nice of him and I hope his offer was because we were friends and not because I was difficult to please.

One of his waiters was a guy called Giorgio. He was a really nice fella but as a waiter, pretty useless. More than two people in the restaurant and he’d start to flap, big style. He’d bring us a menu and then, well that was all he could do really. We’d order a bottle of wine and when it never arrived we’d have to prompt him by waving empty glasses at him. The main course would come and there’d be no cutlery. One time they had this other waitress who was Italian and spoke no English. Another couple would enter the restaurant and before Giorgio could get himself together the trainee waitress seated them and had taken their drinks order. Giorgio ambled over, asked what could he get them to drink just as the drinks were actually arriving! We do miss Giorgio and that lovely restaurant. Ever time you spoke to him he would say, in a strong Italian accent, ‘you’re welcome.’ He rarely did anything but he always said ‘you’re welcome!’

One day the restaurant sadly closed down and the owner started up a new place in Blackpool. When we visited a while ago I noticed Giorgio had not made the transition to the new premises. Pity, he did make us laugh. Anyway, when we dine out these days at somewhere new we sometimes try and spot which waiter has the Giorgio factor.

In Casa Carlos this week in Lanzarote, the main contender for this week’s Giorgio award was a lady that was determined to pour our wine. One of our pet hates is the waiter who tries to pour our wine when we are not ready. In fact, we don’t want the waiter pouring our wine at all. OK, he, or she, can do that initial pour after the opening of the wine and the tasting ritual but after that, leave us alone. We pour the wine only when we are ready and not before. Well, in Casa Carlos we fended this lady off a number of times when she made a raid on our table in a vain attempt to pour our wine. No, ‘get back’ we told her. Liz tried to fool her by hiding our bottle on the low window sill behind our table. Ha, we thought, try and get our wine there!

However, just as we were chatting and I had shovelled in a mouthful of barbecued steak the waitress homed in from our blind side, swerving silently towards us like a ninja but just at the last second Liz spotted her, grabbed the wine and said ‘no thank you’ firmly. You have got to be firm with these Spanish waitresses.

Tapas at the Blue Note Restaurant, nice but a little on the small side . .

When we first arrived in Lanzarote some years ago our first restaurant port of call was a place called the Blue Note, a classy jazz bar restaurant in the Marina Rubicon area of Playa Blanca. We were pretty starving so we ordered a few tapas. Sadly they were of the rather small minimalist type, you know, three meatballs to a plate. We had ordered six tapas but they were so small when we had eaten them we were still hungry. Next port of call was Cafe Berrugo. OK, we get the picture we thought, tapas plates are small in Lanzarote. We ordered four plates of tapas and two beers, then, thought, is that enough? Waiter, portion of fries please. Ten minutes later, the tapas arrive and guess what? They are massive plates! How can we eat this lot and the fries?

We have since become regulars at Cafe Berrugo. The waiters know us and what we like, for instance they always give out complimentary nuts to the English and olives to the locals. However, we have gradually shown them that some English people actually eat olives. Oscar, our favourite waiter looks after us and always serves us the vino tinto at room temperature. Our other favourite waiter is a guy we just call Good Morning as he always bellows out ‘good morning’ when customers arrive, whatever the time of day! It’s always nice to finish the night here with a complimentary shot of ice cold vodka caramel before getting our coats on and waving goodbye with a cheery ‘good morning’! 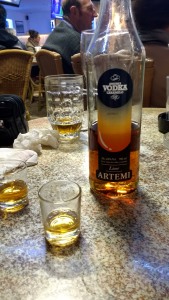 One final dining story: Here in Lanzarote the last few days have been a little stormy, however one day the heavens cleared and the sun shone again. The forecast had said heavy rain but what the heck! We were in barbecuing mood so we cranked up the coals and prepared the meat and salad. Yes, it was a lovely barby. Just at the end, literally as I was taking my last bite of a lovely burger and despite the sky in the west being clear and blue, the sky above and to the east darkened. It reminded me, like a lot of things in life, of a film I’d seen years ago. It was a space disaster movie from the seventies or eighties. The one where the crew need to launch to save the guys on the space station but Cape Kennedy is hemmed in by a storm. Well this hurricane passes directly over and the rescue mission launches through the eye of the storm, just like how we had our barbecue in the nick of time before the heavens opened.

What the heck was that film? If you know, answers on a postcard please!

If you liked this post why not try my book, Floating in Space available from Amazon as a kindle or a paperback.

3 responses to “The Giorgio Factor and other Dining Stories.”