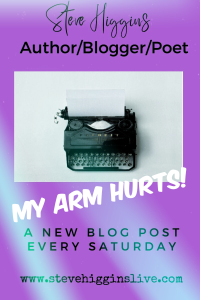 Yes, it does hurt, in fact it hurts a lot. Sorry for the moaning but my arm is really killing me. So, how did this happen? Let’s just go back a few weeks and review the whole thing.

My neck and arm started hurting several weeks ago. At first it was a dull ache but then it got worse. It was so painful I couldn’t sleep. I couldn’t sit up straight at my desk and I had no strength in my right hand, so much so I couldn’t even fire the deodorant spray under my arm, I had to grip the spray so as to use my thumb to press the button. Well, it was either that or go around with one sweaty armpit.

I had a few days off work and it wasn’t getting better so it was off to see the doc. I phoned in to get an appointment but was told I had to call in the next morning after 8am. It wasn’t a life and death thing so why not just book me in? It’s no use arguing with the Doctor’s receptionist, we all know that so OK, I set my alarm, woke up, took my phone into the lounge and dialled the surgery. At 8:45 I got through only to be told all the appointments were taken.

The next day Liz called up at 8. After forty minutes she got through and finally got me an appointment with the doc. Now we were finally getting somewhere. I went into the doc at the appointed time. Due to Covid 19 he decided not to approach me, in fact he directed me to a chair on the opposite side of the room and asked me about my symptoms. ‘Ah yes’, he said confidently, ‘I’ll prescribe some painkillers and you will be fine this time next week’.

I tried to explain that this issue had occurred before, about 16 years ago and that I was pretty sure the problem was a trapped nerve in the neck, referring pain to the arm. Of course, he, a doctor of many year’s training knew much more than me and so I was quickly dispatched to the exit with a prescription for painkillers in my pocket. A week later the pain was worse so I called back to the doctor asking if I could be referred to a physiotherapist, not a particularly incredible request under the circumstances I would have thought. Later I had a call back from the surgery; the doctor wanted to speak with me again, this time over the phone so another appointment was made for the following week for a telephone consultation.

The doc called at the appointed time and despite me explaining again about the previous time I had incurred exactly the same symptoms and how my neck and arm were now killing me in exactly the same way, the doc still hesitated about the physio. ‘I’m going to send you for an X-ray’ he said. An X-ray, wow I thought, we are finally getting somewhere. The next week I went in for the X-ray. I wasn’t kept waiting long and the snapshots of my neck were taken quickly and efficiently. ‘Your doctor will have the results in two weeks,’ said the X-ray guy. Two weeks! Two weeks in this twenty first century digital email internet Microsoft age! Yes, two weeks.

Fast forward two weeks and I a letter arrived from the doc saying I had finally been referred to the physio. Great, they didn’t mention anything about the X-ray but it must have shown something up for them to send me to the physio. Oh well. A few days afterwards I had a letter from the Musculo-Skeletal unit inviting me to a telephone appointment, on October the 20th! The NHS has been dealing with a pandemic so of course that has slowed things down a lot but even so, I didn’t reckon on a nearly two month wait.

Earlier on this year Saga, with whom I once insured my car until their prices went right up, sent me a flyer asking me to join their private healthcare scheme. I was tempted and I was about to buy in when I decided to call the helpline provided by the Order of Northern Tightwads, an organisation in which I have risen to the noble order of Tightwad, Third Grade, only two below the most senior level.

At the Order of Tightwads, we don’t just let anyone join. First you must pass certain ancient tests, undergo many varied ancient rituals and then and only then if you are found worthy, you may be asked to join.

What is the philosophy of tightwadism? Well one of our founding members, the late Penny Pincher, put it this way. Tightwadism, she said, is the art of being in the toilet when it is your round. To put it another way, it is simply this, never to pay when you can get away with not paying, never to pay a large amount if you can get away with a lower one. Always ask for a discount and most of all, never ever open your wallet unless under the most extreme provocation and even then only the tiniest, tiniest amount.

The helpline was manned 24 hours a day and there at the end of the line was a dedicated fellow tightwad who repeated our philosophy above in the most eloquent manner. I told him quickly about my sore neck and arm. Boo hoo he replied, oh dear how sad, what a shame. Did I want to disgrace the order? No. Did I want to reject our philosophy, handed down from generations of tightwads? Of course not. That helpline guy really knew his stuff. The way was clear to me, reject this overt attack on my personal funds from Saga and make sure my wallet and credit cards were once again kept safe.

Pity really because I ended up having to shell out for a private physiotherapist. The Order of Tightwads weren’t happy. My disciplinary meeting is next week.

3 responses to “My Arm Hurts”