You might be forgiven for thinking that all my videos over on YouTube are just promotional videos for Floating in Space. Ok, I do have quite a few Floating promos out there, all designed of course to lull the unsuspecting reader into parting with some of their hard earned cash, but I do produce videos about other things too.

My hobby as a video producer began in 1986 when I was given a VHS compact video camera for my birthday. It was pretty much the same camera that Marty McFly used in Back to the Future, shooting video onto small compact VHS tapes that you play on a standard VHS player by inserting the small tapes into a VHS converter which was just the size of a standard VHS tape.

When I got the camcorder, as soon as I had exhausted the usual stuff, filming weddings and christenings and so on, I starting trying to make something more professional and the first time I felt like I had succeeded was when my friend Steve and I made a film about Manchester Airport. We had both spent lots of time at the airport as schoolkids and we both had ideas about what we wanted to show on the video, particularly the back lanes of the airport and the old war-time pill-box we used to visit on our bikes. Almost as soon as we began to shoot Steve just switched on his life time love of aircraft and started talking, which apart from some brief discussions earlier, was basically unscripted.

When I consider now how hard it is to speak on camera, even when I have a script, I take my hat off to Steve. Not so long ago I took the airport video and added some copyright free music, tidied up some bad cuts and added it back to YouTube. I did think of deleting the original but when I looked at all the views it has had (8.3K views at the time of writing) and all the comments, I just couldn’t bring myself to do it.

Another re-edit was a video about a rail trip from Manchester to Porthmadoc in Wales made on a weekend trip Steve and I made in 1986. The original used a lot of contemporary music and was not very visible on the Internet, in fact a little caption used to come up saying ‘blocked in Europe due to copyright infringement!’ So again with this other re-edit I added copyright free music and tidied the film up a little. I re-voiced part of the narration which was a mistake because my voice is so much more confident these days than it used to be and the old and the new narration don’t really go together. Perhaps I just need to go the whole hog and re-voice the entire narration!

Back in the 1980’s I was a great motorsport fan and spent every other weekend down at Oulton Park, the Cheshire racing circuit. Here’s a video that was a compilation of some of my best video at the track complete with titles made on my Sinclair Spectrum!

Getting to some of my more recent videos, here’s me reciting some of my poetry, in fact this poem, The Long and Dusty Road of Life is one of my favourites and recently the people at Think Shorts thought it was good enough to be featured on their web page.

One of my usual themes in this blog is second-hand books and I’ve done quite a few posts on the theme of my Holiday Book Bag. Every time so far I’ve managed to convert the post into a video version. Here’s the first from 2016 with me dressed as Bruce Willis in Die Hard fashion.

Here’s something different again. It’s actually still a plug for Floating but also a spoof on the opening of the Woody Allen film Manhattan, only instead of talking about New York like Woody, I wax lyrical about Manchester. Once the watcher has been lulled into a false sense of security, then comes the link to Floating!

Having got the hang of this narration business I decided to step back and add a narration to a video that just had captions when I first put it together. Even though at first glance the video seems to be about cycling, it’s actually about video editing. Click here to see the original.

One of my favourite videos is this one. The narration has been put together from my blogs and text from Floating with some new additional thoughts on Manchester. I revisit the sites of some of the locations used in the novel and talk about how things have changed, take a ride on the town’s new tram system and generally wax lyrical about Manchester.

While I’m on the subject of Manchester, my home town, here’s a video showing me returning to the city centre having not visited at all during the pandemic.

Talking to camera and trying to make your book sound interesting isn’t as easy as it seems. In this video I’ve tried to show how difficult it is and produced what is generally called a bloopers reel. It’s nothing brilliant, just a bit of fun.

When I travelled to France in 2018 I clipped my action cam to the window and filmed pretty much everywhere I went. On several occasions, especially when travelling long distances, the cameras ground to a halt when their battery charge ran out. Anyway, this short video takes in the village of Parçay les Pins where we stayed, my favourite town of Saumur, brocantes and barbecuing.

Finally, here’s a video also from 2018 where Liz and I took our motorhome to Northern France and explored the Military Cemetaries and Graves from the First and Second World Wars. This version was a re-edit which also featured at Think Shorts and the Bitesize Film Festival. 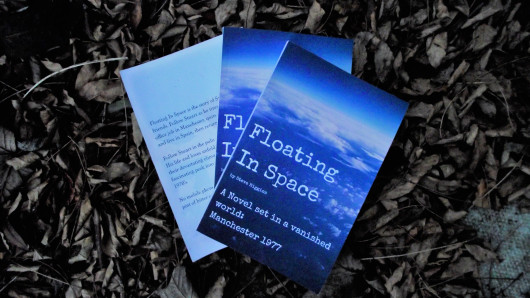