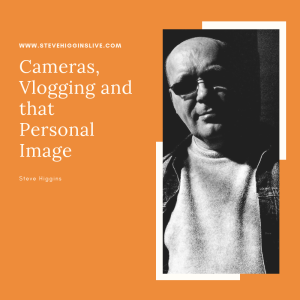 Travelling to the Loire Valley region of France this summer I brought four cameras with me. My trusty Nikon D100 SLR was left behind in favour of my Action cam, my GoPro Hero+, my Canon G7X and my always reliable Panasonic HD pocket camcorder. The Canon comes highly recommended as the top vlogging camera of its kind. If you want to look good on YouTube, this is the camera to have, and when I bought it after many moons of trying on eBay I was looking forward to branching out from merely writing about stuff to actually talking and showing you stuff too. My action cam I’ve had for a while but it’s really just a cheap copy of a GoPro camera and the thing is when you have a cheap copy, you tend to want the original. The only thing is, working with GoPro cameras isn’t that easy.

The first thing I noticed about my GoPro Hero+ is that there is no viewing screen so it’s not so easy to set up a shot. However, you can link the camera to your mobile and get a visual confirmation of your shot. Okay, skim back to the manual and I see I have to enable wi-fi. Nothing happened so back to the instructions and then I see I need the wi-fi app. Okay, download that and am I getting anywhere? No. Have I set up a password? No, okay, I sort the password out and finally, we are getting somewhere, can I shoot some video? Yes! Have I brought my mini memory card adapter to transfer video to my laptop? Er, actually, no. Can I do it by wi-fi? Yes, to my phone but I don’t want the stuff there I want it on my laptop. So, I have to download the GoPro pc application. Does it finally work? Yes. Am I bothered? No, cos I’m hot and stressed and I’m off to the pool!

Since then I’ve had a radical rethink and perhaps the age-old written word is more my style after all.

Why the change of heart you may ask. Well, there is not only the hassle of dealing with modern technology as I’ve mentioned above, there is also this. I am getting on a little, in fact not so very long ago I hit the big six O which was quite a turning point for me. The big four O didn’t make much of an impression. The big five O, well there was something, some feeling of me getting on a little but nothing too bad but then along came the six O and there was a feeling of, six O, really? Am I actually that old? The thing is, aging only really happens on the outside. On the inside a guy is pretty much the same guy he has always been. Inside, I don’t think I’ve really changed since I was, well, eighteen, nineteen or maybe twenty. My thinking has always been the same, I’ve matured a little, become a little more sensible (a little) but generally speaking I’m just the same, so how has this sixty thing just crept up on me?

The answer is I don’t really know. I’ve just been chugging along, getting on with my life and suddenly I’m sixty. I have to say I’m not too happy about it and perhaps I should look into making a complaint. The council comes to mind or the government. Perhaps they should have sent me a letter or something. Perhaps they should have picked up the phone and said hello, Steve, do you know what year it is? Maybe it’s time to take it easy, chill out a little or something of that nature.

Come to think of it, I did get a letter -from the civil service offering me semi-retirement- which is why I now only work three days a week. To think, they knew I was getting older but I never twigged!

Anyway, getting back to my cameras, I started off by shooting some background stuff here at our rented gite in the Loire; you know our villa, the pool and so on. While I was messing about and getting used to my New GoPro camera I shot some stuff of me checking out the villa, the pool and the grounds. Then I tried some shots of me typing away on my laptop, knocking out my latest post. I figured I could put a good narration together from some of my old ‘Sun Lounger Thoughts’ blogs or perhaps talk about being a blogger or a self-published author at work, that sort of thing.

One evening after the usual day of swimming, sunbathing, reading and drinking wine, you know, the average sort of holiday day, I thought I might as well review some of that stuff, that video that I’ve been shooting. The big shock was really, who is that old guy in the video who resembles my old Dad? Do we have a serious problem with lenses or filters or can that old overweight guy really be me?

Taking a serious look at myself even my hands look big. Did I say my hands? Just taking another look at those hands and I realised they were my old Dad’s hands, only bigger and chubbier than his ever were. No wonder I’m always pressing the wrong key on my mobile phone with those big chubby mitts!

We find only one tool, neither created nor invented, but perfect: the hand of man.” ― Julio Ramón Ribeyro

The other day in a cafe in the village of Parçay Le Pins, Liz took this picture of me sitting at our table having just eaten fish and chips and supping a pint of lager. 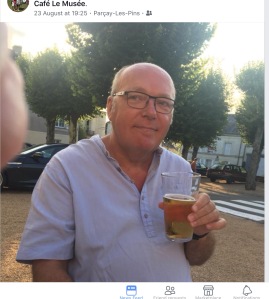 The picture isn’t a bad one. Ok I’m not as young as I used to be but I look reasonably well, I suppose, although I’m clearly not the cool dude in that graphic at the top of the page!

The thing is in a still picture you can put on your winning smile, (not exactly winning in this picture but you know what I mean) turn your best side to the camera, hold in your tummy and all will be ok but with video, things can be a little more revealing.

So, I think I might just put my vlogging plans on hold for a while, just a little while, well perhaps indefinitely. My next video will probably feature me but probably on the narration rather than the visuals . .

Steve Higgins is the author of Floating in Space, a novel set in Manchester, 1977. Click the links at the top of the page to buy or for more information.

One response to “Cameras, Vlogging and that Personal Image”