I suppose I must be a little bit naïve regarding politics because I thought the referendum about the EU had been and gone, was done and dusted and that was that. Before the results appeared, I thought the whole thing was pretty simple: either we would leave the EU or stay in it. Oh well, how wrong I was!

The referendum result has triggered all sorts of things. Firstly the Prime Minister has decided he will stand down and rightly so I suppose. He campaigned hard to stay in the EU so how can he be expected to manage our exit from the EU?

Secondly, and rather strangely, the referendum has also triggered a Labour party leadership election. Not sure why that is but it seems to be a case of Labour somehow ‘lost’ the referendum so now we need a new leader. This is the 21st Century version of political hari-kari. No longer do politicians live to fight another day, now they must fall on their sword, drop by the wayside and give way to a newer leader. Jeremy Corbyn did win a leadership vote by a whopping 60% in 2015 but of course in modern fast moving politics, that no longer matters!

Here are the latest developments- as they happened!

Tuesday.
Jeremy Corbyn has lost a vote of no confidence, Nigel Farage has been booed in the European Parliament (he did tell the European Parliament that basically they are a waste of time and are in denial) and Nicola Sturgeon is already planning to force a new referendum about the Scots leaving the UK. No wonder somebody once said a week is a long time in politics. If you look at the Scottish results as a purely first past the post result, Scotland voted overwhelmingly to stay in the EU. Looking at the actual returns, over a million Scots voted to leave and a million and half wanted to stay, hardly overwhelming was it? Certainly not a mandate for leaving the UK in my book but then Nicola Sturgeon is clearly reading a different book.

Wednesday.
Nicola Sturgeon flies to Brussels for meetings with EU leaders. Although the Scottish MEP Alyn Smith got quite an ovation in the European parliament when he announced that ‘Scotland hasn’t let you down’, Miss or Mrs Sturgeon didn’t quite get the welcome she anticipated. Various individuals urged Jeremy Corbyn to stand down, including former leader Ed Milliband. Corbyn steadfastly refused to bow to the attempted leadership ‘coup’. Good on him I say.

Thursday.
Boris Johnson decides not to try for the Conservative leadership and guaranteed Prime Ministership. (Bit of a surprise, that one.) Michael Gove throws his hat into the ring as did pro leave Home Secretary Theresa May. Interesting: Surely the next PM must be pro Brexit? Jeremy Corbyn is looking more secure as Angela Eagle (any relation to Eddie I wonder) decided to postpone her challenge for the Labour leadership.

Friday.
Angela Eagle is still considering a leadership challenge as is ex-shadow minister Owen Smith but they are still waiting for Jeremy Corbyn to ‘do the right thing!’ Jeremy Corbyn says he does not want to betray the labour members who elected him last year by resigning.
The Daily Mail described Thursday’s events – during which Michael Gove surprisingly announced he was standing for the Tory leadership, rather than supporting Boris Johnson’s campaign – as the party’s “most savage blood-letting since the fall of Thatcher. On a day of extraordinary bitterness, Michael Gove knifed Boris Johnson in the back – ending the former London mayor’s dream of becoming prime minister.”
Some conservatives are now suggesting that Michael Gove should stand down and let Theresa May run unopposed into the leadership of both the country and the Conservative Party. (That’s the same Theresa May that was part of the remain group, like the soon to resign David Cameron, isn’t it? ) Dear me, what has the referendum done to democracy?

One thing that has really surprised me in this referendum is the emergence of two distinctive campaigns, the Remain camp and the Brexit camp. I had thought that politicians would come forward and declare themselves for or against EU membership but I would never have guessed that fully fledged campaigns would emerge, each with their own publicity, leaflets, PR events and even their own ‘battlebuses’. Who paid for these campaigns I wonder? 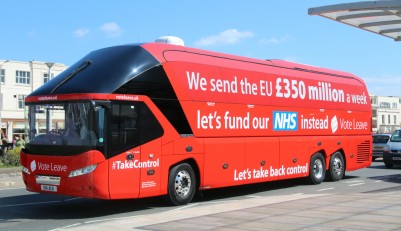 The strange thing is that even in the media there have been calls for the Brexit campaign to come forward with plans for a post EU exit UK. Do people not realise Brexit is not actually a political party? They haven’t won an election, they will not be running the country, in fact nothing has really changed because the same people who ran the country prior to the referendum are still running it!

The other thing that’s interesting is the talk of another referendum, as if we didn’t get the first one right so now we have to have another one! Don’t people understand that there is always a loser in a democracy?

The vote was pretty close, 15 million want to leave and 14 million want to stay, that’s 51.9% against 48.1% but even if it was 70/30 that would still mean 30% of people would be disappointed. Either way, we’ve had the referendum and we voted out, just like the one in Scotland where they voted to stay in the UK.

The previous election didn’t quite go the way I wanted it to but that’s the way of elections. There will always be winners and always be losers. Only a dictator gets all the votes, all the time. After all, everyone voted for Stalin.

Floating In Space a novel by Steve Higgins, available now from Amazon. Click the links at the top of the page to find out more!