I left home when I was nineteen and went to share a house in Burnage with my friend Brian. Brian was a regular at a pub which I think was called the Farmers Arms, anyway; whatever it was called, he mentioned that a pub holiday to Malta had been arranged but someone had dropped out and there was a spot for me on the trip. It turned out there were eight pub regulars going, including me, and eight pub landlords.

My Mum was a little apprehensive at the time because since I had become a busman my social life and intake of alcohol had escalated hugely. Now I was playing snooker at the club after the early shift, out late after a late shift and out on my rest days too, but she was happy eight responsible landlords were going along to keep me ‘in check’ as she put it. 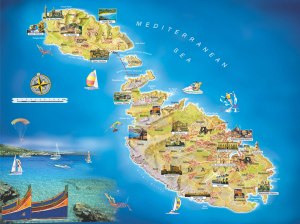 We rented two apartments in Malta, one for the pub regulars and one for the pub landlords and on the first night at the resort the landlords invited us over to their apartment for a drink and it appeared to me as we entered their place that we were walking into a well-stocked brewery. Perhaps they were intending to open a bar or some such establishment in Malta because the place was stacked with booze. At the end of the night as we staggered back to our place the landlords called out, “Make sure you invite us over to your place!” Yes, a pity about the poor Maltese postal service. Can’t understand how that invitation was never delivered!

Later on towards the end of the week which turned out to be one long alcoholic soiree, we ended up in some Maltese bar after an evening spent visiting the ‘Gut’, a fairly appropriate name for the Maltese red light district. The numerous ‘ladies of the night’ there had a habit of grabbing a man’s crotch presumably to check if he had the equipment necessary to enter into a transaction with them. Strangely, when they tried the same tactic on our wallets they found us less co-operative.

I sat myself at the bar ready for a relaxing night drinking and chatting and towards the end of the night the manager locked the bar up while we were still drinking. Clearly a Maltese lock in. Every time we ordered a drink from then on the manager said in fractured English, “I let you stay after time, you buy me drink.”

OK, seemed like a reasonable arrangement to me so every drink we bought we added ‘one for yourself’ to the manager. He had a tall glass with some ice and lemon and topped it up every time from a bottle of what appeared to be whisky.

One of the landlords who had the physique normally associated with a sumo wrestler seemed to be pretty interested in this arrangement. He came and sat near me at the bar and asked what the drink was.

“No, I get you good whisky, cheap whisky for me.”

My friend the landlord however had other ideas and with a swiftness and grace which I wouldn’t have thought he possessed, he flipped himself up and over the bar, grabbed the manager’s glass and took a big swig of the amber liquid. I can only guess that this impromptu taste test was something of a failure as he then sprayed the offending drink all over the bar!

The drink was probably cold tea or some other unacceptable non-alcoholic beverage, but either way, what happened then was that this small bar turned into a scene from a John Wayne film with accusations and glasses flying, tables and chairs overturned and a bunch of Mancunians turned out onto the streets well before their usual drinking up time.

When I returned from that holiday I popped into my Mum’s with some Maltese confectionery or something and Mum looked at me and said “Hope you behaved yourself young man.”

“Good job those landlords were there to keep an eye on you!”

Dear me, If only she knew!