Years ago when I was a teenager, my friend Chris asked me if I fancied a holiday in France with him at his Grandfather’s villa in Hyeres, not far from St Tropez. Now on the surface that seemed to be a pretty incredible invitation. I wish I had a friend today who could make me an offer like that. Like a lot of things in life though, there was a catch, and in fact there turned out to be more than one. Chris’ Grandfather was retired and living in the UK and we were taking him with us to visit his property in France. Anyway, we booked a trip on something called the Magic Bus; a coach service frequented by students and back packers attracted to the cheap fares. It was quite a contrast when we arrived in London and boarded our bus at the coach station; fifty or so teenage travellers and one rather frail old man. 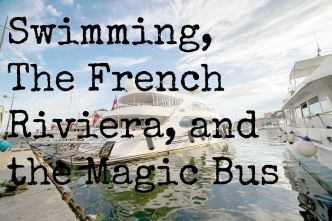 Two things stand out from that journey. One was waking up in the middle of the night, curled up in my seat and watching the two young French drivers effect a driver change while the bus was still travelling at roughly seventy miles an hour in lane one of the autoroute. One driver leant out of the cab, still hanging on to the steering wheel, while the other slipped nimbly past him into the seat. He took the wheel and then reached down to adjust the seat with his other hand. Once he was comfy and settled in, he put his foot down and carried on. The other driver was already asleep in his little bunk.

The other thing was early in the morning we awoke to find ‘Pappy’ as Chris called him, scrabbling about on the floor. He didn’t seem to understand my poor schoolboy French so I had to nudge Chris awake and ask what was going on. After a swift French exchange Chris said he was looking for the false teeth he had dropped in the night. One of the back packers nearby found them and Pappy leapt up, grabbed the gnashers and popped them into place!

Poor old Pappy was not happy when we arrived at his French villa. The villa had come to him after the death of his second wife and there were conditions attached meaning it would pass to her family in full when Pappy died. During his absence, the French relatives must have been getting impatient about their inheritance and they had somehow managed to sell off some parts of his land and rented out the downstairs of the villa to a motor mechanic. Pappy was not happy.

The villa was the second catch. Lovely as it was with its extensive grounds, it appeared to me to have been untouched for many years. There was no running water at all in the house. If we needed water it had to be pumped up from a well in the garden. There were no indoor toilets; one had to use the traditional ancient French toilet outside. Pappy, being unable to reach these facilities in a rush, had a bucket in his bedroom which Chris and his brother Tony also made use of. As I could not approach the bucket without retching I declined to either use or empty it. However, after one evening of excessive drinking they caught me using it and I was forced to empty it the next day. I could only do so by wearing my diving mask and snorkel and as I pottered along to the French toilet the two of them, watching from afar collapsed into laughter which soon passed to me and it was much later, after repeated attempts, when I managed to complete my task.

That snorkel and mask turned out to be pretty helpful in an other way too. As a school pupil at Sharston Comprehensive school, every Wednesday I think it was, we marched the short distance to Sharston baths for our swimming lesson. I use the word ‘lesson’ reluctantly as I really don’t remember getting much tuition at all, As usual I joined the small band of non swimmers in the shallow end of the pool. The teacher tossed us a few polystyrene floats then joined the others at the deep end. That was generally the last we saw of him till the end of the lesson. All the time at that school I can only think of one person who ever made the move from the non swimmers to the swimmers and that was because his dad taught him to swim in the summer holidays. All well and good you may think but what has that to do with a trip to France? Well, simply this, on that holiday in Hyeres, with the help of my two friends and a borrowed dive mask, I finally gained my confidence in the water and learned to swim in the gentle blue waters of the Mediterranean by a quiet beach called ‘Le Cat.’

When the time came to leave, Pappy refused to go. He was Italian by birth but had lived all his life in France and wanted to stay here in a place where they spoke a language he understood. He was very old though and unable to look after himself and after some persuasion, he came with us and returned to the UK. Sadly, he died some time later.

Years afterwards Chris returned to Hyeres to take a look at the old place. He told me that the villa was still there but the land had all been sold and numerous properties now closely surrounded it. The relatives had finally got their inheritance.

If you liked this post, why not try my novel? Floating in Space is set in Manchester, 1977. Click the links at the top of the page to buy or for more information.

2 responses to “Swimming, The French Riviera, and the Magic Bus.”