Time changes everything. Even in this remote (well, remote-ish) part of the world (the Cher region of France, as I write this) there are changes. The great thing about this gîte is the rather lovely pool which last year was open to the elements with a large patio but has now been covered by an enclosure, an abri as they call it here. It keeps the water warmer and means that the pool is useable in the cooler parts of the year. It also means that the pool complies with all the bureaucracy that goes with having a pool in France. Every pool must be protected against the accidental falling in of children so a small fence has to encircle the pool to keep wandering and unescorted children out of the water. We used to rent a place in the Loire which had a sort of concertina cover, which was in sections, one fitting into the other which could be all pushed completely back, opening up the pool in hot weather. Sacré Bleu! Said the French bureaucrats, This cannot be possible! That pool soon had the mandatory fence erected covering the exits. The owner was a little surprised when we pointed out that when the concertina covering was pushed back the fence could be bypassed. Mon Dieu! The next day we found that parts of the concertina had been screwed down, meaning it could only be opened within the fenced area. C’est la vie!

This is how the pool looked last year

Health and safety has reared its ugly head here too. There is a metal hand rail that leads one down into the pool but of course when it is hot -this year in the 90’s and hotter- the metal handrail gets . . hot! One of the previous tenants complained so the owners added a sort of padding, wrapped around the rail to protect one’s hands and fingers in the hot weather. (Note to self: exposed metal gets hot in 90 degrees plus!)

It’s funny now to think back to the first ever pool I swam in. Well, swam isn’t exactly the right word as I couldn’t swim then. I’m talking about when I was a schoolboy at Sharston school in Wythenshawe, Manchester many years ago. Every Monday, I think it was, we walked down to the baths at Sharston and our teacher sent our small group of non swimmers down to the shallow end, issued us with a polystyrene float and that was the last we saw of him till the end of the lesson. He spent all his time with the ‘advanced’ swimmers down at the deep end and at the end of the year he expressed himself very dissatisfied with our group as we hadn’t progressed to the ‘advanced’ stage. I wonder sometimes, if he had ever thought why we hadn’t progressed? Did it ever enter into his tiny mind for one minute that my schoolmates and I had no idea how to progress, how to become swimmers when apart from being handed a float, we actually had no swimming tuition at all? Strange that.

One year, at the end of the term, our teacher was so disappointed with our group that he took us up to the deep end where our more advanced schoolmates were doing their swimming proficiency medals. They had to jump into the deep end wearing pyjamas, undress, and then pick up a weight from the deep end. It was so very, very, easy that even we, the non swimmers could do it, he said. That was how I was compelled to jump in at the deep end wearing pyjamas, hanging onto a very long wooden pole with our swimming teacher holding the other end. I grappled about underwater for the weight and couldn’t find it. Not surprising really with my eyes shut. I couldn’t get the pyjamas off. Not surprising either as I hung onto the pole with both hands as if my life depended on it -which it did actually- and when finally dragged spluttering and choking to the surface, I was beached on the side of the pool like a stranded whale. My non swimming pals escorted me back to the shallow end like a hero. I must have been a sort of hero, to them, although inside I was a gibbering wreck, although I do remember thinking that if, by some strange chance I had come into contact with the weight at the bottom of the pool, I would have seriously considered whacking our teacher over the head with it!

I’m not a great swimmer but I finally learned to swim, after a fashion, in the warm waters off the South of France many years ago and as for my swimming teacher, Mr George, thanks for not completely drowning me!

Some years later the local planners decided to run the M56 Sharston bypass right through the centre of Sharston. A deep trench was cut, completely obliterating Sharston High street and its shops and businesses.  (Interesting idea that: Bypassing a place by completely obliterating it!) Some years afterwards Sharston Pool was knocked down too, as was Sharston Highways depot where my Dad used to work, and my old school, Sharston High, as was the school of our arch enemies, St John Vianney’s Catholic school round the corner. Yes, times indeed change.

Towards the top of Sharston, where Princess Parkway begins, is an area known as Royal Thorn. A pub bearing that same name used to stand there and an even older pub stood on the site in earlier days. Apparently the name dates back to the 16th century. The Royal Thorn was demolished a number of years ago though I still remember Sunday afternoon walks round the area which culminated in a drink in the large gardens to the rear of the pub. I, as a child, used to get a lemonade and a packet of crisps and would occasionally run to see the steam trains passing by.

The Sharston Hotel, once a local landmark is also gone. In its place stands an empty, unused, rather unattractive building.

Recently I was rather shocked to find, via Facebook, that an old haunt of mine, the Salisbury, a pub right by Oxford Road Station in Manchester, is in danger of demolition! Times move on, clearly, and the life of the city centre must change but why do we have to destroy those wonderful places of years gone by if it is not really, really, necessary? Shouldn’t the face of a great town like Manchester adequately reflect the past as well as the future? 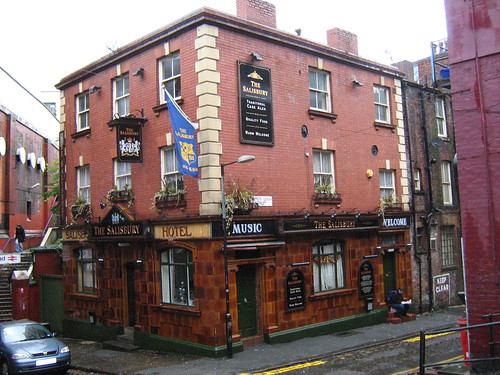 The Salisbury is a lovely old pub and one that I remember from my youth. In the mid seventies I left school and started work at the Refuge Assurance company on Oxford Rd and spent many a lunchtime and early evening at the Salisbury. I visited the pub last year and clearly a refurb has been done but happily it was a sympathetic refurb and the pub looks very, very similar to how it looked in the seventies. The stone flagged floor is still there. The food serving area has moved, in fact the bar has moved a little and the end of the pub, where my old office workmates and I used to congregate is now either an office or a private area but substantially, the pub looks pretty similar to how it used to look. On the outside, the pub is exactly the same as it always looked, and every time I see it, it is almost like the past, welcoming me back again.

Thanks to the Facebook Wythenshawe page for the old pics of Sharston.

If you liked this post, why not try my book, Floating In Space? Click the links at the top of the page for more information.

One response to “Swimming pools, Pubs, and the March of Time.”