It’s funny how mobile phones have literally changed the world. In fact It’s hard to remember a time when we didn’t have them. Off the top of my head I really don’t know what the last mobile free year was and to find out I’ve had to do a google search. The first mobile phone service started in 1983 in, well, where else? The USA. It wasn’t until 1992 that the UK had consumer mobile phones on sale. I remember buying one of the very first ones round about then, it was a motorola personal phone which was a pretty big device and seemed to use its charge up pretty quickly.

The first text message was sent in 1992 and the first camera phone appeared in 2000 with picture messaging available from 2002. 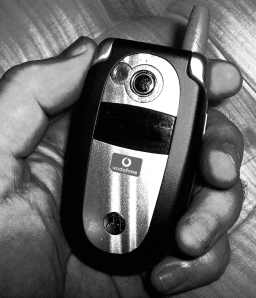 I love my mobile. It isn’t a smart phone but it does everything I need it to do. It has wi-fi which I hardly ever use. It has a camera which is a must on any phone that I buy but when it comes down to it, I don’t really take many snapshots with it. Certain things about mobiles are annoying though and here are a couple of the main ones.

Queuing up at a supermarket till and the woman in front is just about to pay then she decides to answer the mobile phone ringing in her pocket. Is it a vital call? Is it of major importance? No, it’s her mate calling up for a chit chat but all of us in the queue have to wait while she carries on chatting as if she has all the time in the world. I’m at the point of saying “We’re all wanting to pay and get off home!” when someone behind me shouts “We’re all wanting to pay and get off home! Put that f***ing phone down!” The lady appears shocked to hear this but we are all highly fed up of her, including the supermarket till lady.

Why is it that when a vital call is required in a TV soap, the soap star in question has left their mobile behind or is out of battery or even just doesn’t bother to answer? Soap writers just can’t get their heads round mobiles! They are just a plot busting device so what do they do? Characters leave them behind, run out of battery or just plain ignore their phones. Sorry, that just doesn’t happen in real life. Take a look around you in any public place. People are glued to their mobiles!

Anyway, just to finish, here’s my favourite mobile story. Many years ago when I was working as a bus driver in Warrington, I was at the wheel of my bus but had got stuck in a queue of traffic just as we were approaching Warrington bus station. I picked up one of my fellow drivers who had nipped out on his break and popped into the shops. We were talking about a nutter who travelled on our buses and chatted to all the drivers. Now some nutters are pretty nice people when you get to know them but some are the bane of a bus driver’s life! I didn’t really care for this particular guy so I tended not to let him on my bus if I could help it. By coincidence we saw the same guy just then, walking along towards the bus station and my friend said, “go on, pick him up.” Well we were stuck in a traffic queue going nowhere so I opened the doors and let him on. I don’t quite remember how this nutter looked but he did have a kind of Lara Croft thing strapped to his leg.

“That’s me mobile phone,” he said and pulled out a big 1990s style mobile.

Now in the next lane there was a tatty old builders van with a mobile number painted on the rear doors and behind it was a very smart Jaguar driven by a very posh chap wearing a suit and tie.

The nutter dialled the builders number and when the call was answered said something like this;

“That bloody van of yours is a disgrace! I’m sat behind you in the traffic and your engine fumes are bloody choking me! Get that great heap off the bloody road!” Then he cut the builder off.

Nothing happened for a moment then the builder, a man with a physique not unlike that of the incredible hulk, squeezed himself out of his van and walked back to the Jaguar.

Just then the lights changed and we drove off. I’ve always wondered what happened next but if you ever get a phone call like that in Warrington check that there isn’t a guy with a mobile phone strapped to his leg in something like Lara Croft’s dagger sheath nearby!