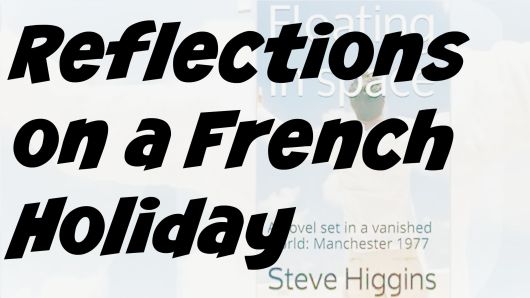 As I come towards the end of my French holiday it’s perhaps a good time to sit and reflect about France and the French people. I do love the quiet of the French countryside. It seems to me that in the hustle and bustle of the small islands that make up the United Kingdom it is harder than ever to find a little peace and quiet. Perhaps up there in the Scottish Highlands peace can be found, or even in the Lake District but in places like urban Manchester, silence is hard to find.

The French departments, similar I suppose to English counties, date from Napoleonic times and there are ninety six departments in France today which are further subdivided into cantons. Here in the Cher region, to the south of Paris are some lovely rural communities. Still and quiet villages, almost haunting in their silence can be found everywhere.

What I’ve always liked in France is the simple tabac. As the name suggests it’s a place where you can get your tobacco and in some places it is also combined with a presse so you can also pick up a newspaper. One thing you will always find in the tabac though is a bar, similar to the vault of an old English pub where French men chat and drink coffee, sip wine or a pastis. In the village where Liz and I are staying, Germigny l’Exempt, there is a small sell-everything shop, a combination epicerie, depot de pain (the lady owner explained carefully that they are not a boulangerie, but a pain depot) and of course, a bar! An interesting combination. You can imagine the situation if a similar establishment was available in England: The wife happens to mention to the husband, sitting in the lounge watching sport that they are a little short on veggies for the coming Sunday dinner. The husband jumps up; “need some vegetables love? Well, I’ll just nip down to the local shop and get you some!” And have a few beers while he’s there no doubt! Frenchmen, at least those of the rural Cher countryside, are clearly made differently here because I’ve yet to see anyone in that bar!

Last Friday night, Liz and I went down to a nearby town, La Guerche sur l’Aubois, and had a meal out. The only place open appeared to be a rather nice looking pizza place so we went in. There were only two other diners and at the small bar –this was Friday evening remember- were two or three French guys chatting. We had our pizza, had a beer at the bar and by nine pm they were ushering us out! What do the French do ‘au weekend’? I don’t know but it’s certainly not a beer and a pizza! One really nice thing about that bar though, every time a new customer came in, he said hello to all at the bar and shook hands with everyone in turn, including Liz and I, two English strangers. As for eating out though, that is something the rural French do of a lunchtime, not an evening. Shops close in France twelve till two while hungry Frenchmen go to the nearest bistro or restaurant for lunch.

At every restaurant or bar serving food you will always see a sign for the ‘plat du jour’ or the dish of the day and one thing I love about French restaurants is their menu deals. You might see something like, for instance, a starter, the plat du jour, and then fromage (cheese) to finish. I do so much prefer small courses to one big meal!

The great thing about France is the wine and my personal rule about French wine is this –buy the cheapest, it’s always the best but then, I like my wine cheap and cheerful. In Intermarche, the Asda of France, you can buy a ten litre box of merlot for about 17 euros, that’s about £13 in UK money, an absolute bargain. Forget expensive French wines, a nice quaffable French red does it for me every time!

Another thing about the French, especially regarding drink. You’d think that France, the country that created brandy would be a haven of cheap brandy, after all, this is where the drink is made! Sadly that isn’t the case, in fact, brandy in France always looks to me to be pretty expensive. However when you come to whisky, a product of Great Britain, there seems to be an incredibly vast choice, far bigger than you would find in the UK. Perhaps the French are a nation of secret whisky drinkers!

Whisky in a french supermarket -and this was only one section!

One final observation about the French. We’ve spent many a weekend on this holiday visiting brocantes and vide greniers, flea markets and car boot sales to you and we see so many stalls selling beer bottle tops. Here is a quick flash for any frenchman selling bottle tops; No one is going to buy them! Well, not me at least!

Anyway, as you the reader reads this blog we’ll have left the Cher region and will be motoring serenely across to the Loire for a few days before making our way back to the UK and home. One final reflection about holidays. Why is it that I’ve packed so many things for this trip and used so few? All my clothes were worked out in advance, polo shirts for the fetes and brocontes, smart shorts for being seen in public and scruffy shorts for private use. I also brought along both jeans and trousers, which I have worn exactly once each. Despite all this planning and thought, the fact of the matter is that I have spent most of this holiday in the same scruffy old vest and the same scruffy old pair of shorts. If I’d really thought about it, I could have significantly reduced the amount of clothing and saved some space for . . . more cheap wine!

If you enjoyed this post, why not try my book? Click the links at the top of the page for more information or Click here to buy!