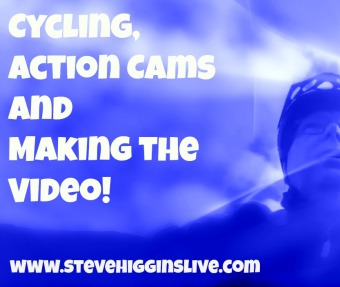 One thing that concerns me in my new semi retirement is my health. I really am not an active person so I am always looking to stay healthy which is one reason why I have dug out my old bike from the depths of the garage. A quick hosing down and a spray on the vital points with WD40 and the bike doesn’t look so bad. I last used it regularly over twenty years ago when I had an early start in Warrington and I used to cycle from Newton Le Willows.

Since then I picked up a rather nice mountain bike, which was a joy to ride and served me well during my infrequent ‘get fit’ spells for years until one day last year when it fell prey to some light-fingered scoundrel who took a like to it and whisked it away.

Talking about bikes and cycling makes me think about the bikes I had as a teenager when cycling was pretty much my only means of transport. Me and my friends used to cycle all over, even ending up in the peak district on a few occasions, a fair old haul from our council estate in Manchester. My teenage cycling days came to an end one day in the 1970’s when I traded my bike to my brother in a swap.

My brother couldn’t actually ride a bike but that didn’t stop us from swapping. He might have wanted a particular record or something that I had so we would swap that for my bike and some weeks later usually swap back or I would pay him the cash equivalent. Now that’s where I felt I really had one over on Colin, my brother, because he couldn’t, and still can’t ride a bike! Yes, I was on to a winner there because I’d swap my bike for a record or book of his that I wanted and I had full use of the item while he couldn’t use the bike because he couldn’t ride it! After weeks of his moaning I usually had to pay him a cash sum or give him the item in question back.

One time he really got one over on me. I had swapped my bike for one of his records or something or other; I can’t really remember what. Anyway, one day I went to go out on my bike -OK, his bike- opened the shed and it was gone. What had happened? Had it been stolen, where was it?

‘The bike?’ he answered blithely; he had sold it to his friend because he wanted money to buy a new LP!

My Mother facilitated the removal of my hands from his throat with a firm whack to the back of my head and asked what was going on?

Anyway, back to the present day and another reason to start cycling is that a while ago when I was in the midst of a mad eBay buying session, I picked up, fairly cheaply, one of those action cams you have probably seen advertised. The same style of action cam that is responsible for so many videos of stunt cycles, skiing, surfing and so on that are featured regularly on Facebook and other social media sites. 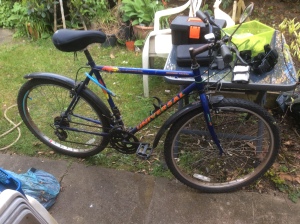 My rather old bike looking good after a quick sprucing up!

The big problem with these kind of cameras, at least for me is this: Not only are they small, the buttons are small too, and the screen is small, and the indications on the screen -which mode you are in, battery time, record, play and so on, are even smaller, so setting things up is pretty hard especially for a man who uses reading glasses. As for setting the date and time -forget about it! Another thing is that when you switch on your camera and then set off biking, you, well me anyway, are not always sure if I pressed the right mode, if the two clicks for standby and then one for record actually registered so when I come back after a ride I sometimes get

The video of today is very much a tool of social media. Attention spans are short so documentaries are out and very much in is a short, straight to the point video. In fact, videos today have a lot in common with music videos which started life in the 1980’s when the idea of a short film or video to promote a music single evolved. Since then, a whole generation of MTV style cable and satellite channels have emerged showing nothing but music videos. No intros, titles or credits, just straight in with the song.

Michael Jackson’s video Thriller was a highlight of the music video genre. It won an award for best short film if I remember but my favourite video was the one where each paving stone lights up as Jackson, doing his wholly personal trademark style of dancing, steps on each one. Billie Jean, I do love that song.

Despite doing some video training in Manchester, some years before everything went digital, I have never worked in film or TV but that has not stopped me pestering TV and film companies with scripts and TV ideas. I still have hopes of one day having a movie made from one of my scripts. My favourite movie story is that of Sylvester Stallone who wrote the screenplay to the movie Rocky. The film studios snapped up the screenplay but there was a catch, Stallone wanted to play Rocky himself. The studios thought for a moment and made Stallone a counter offer. James Caan was a highly bankable and famous star and the producers preferred him to the unknown Sylvester Stallone. They offered Stallone a million dollars if he would let Caan play the part. Stallone declined the offer, played the part himself, and the rest, as they say, is film history.

Anyway, back to my action cam. To be honest, I’m not even sure why I’m filming myself, although I did have a vague idea of trying yet another VLOG, this time one related to cycling. Actually, if I’m truthful, I just like messing about with cameras and video and pretending to be the film director I always wanted to be. Anyway, after two laps of the estate and about three mins of camera video, it was time for a cuppa. Then it was time to spend days, weeks even, fiddling about on Windows Movie Maker, cutting and splicing and so on until the program refused to make any more cuts. Perhaps there is a maximum movie length  or I don’t have enough mega bytes or whatever. (You can see clearly that although I pretend to be pretty tech savvy, I’m not really.)

Video edit one therefore was something of a disappointment but undeterred I started another one. This time I had another array of video footage all taken on a local bike ride. I did one trip using the camera mounted on my handle bars facing forward and then on the next run facing backwards showing me peddling away. Then I experimented with various camera positions. My action cam came with numerous items of kit for attaching cameras and one was a velcro band which I attached to my wrist which produced some dynamic shots of gear changing and braking, all of which add to the thrust of the finished edit.

Editing can be a slow process but as long as you have a clear result in mind it can be very satisfying. The main rule of editing for me, is always have a shot ready to cut to. On TV interviews they used to call this the ‘noddy’ shot. Interviews were filmed with only one camera so after the VIP had left the studio the interviewer would face the camera and repeat some of his questions and do some serious nodding so that in the final edit, when something was cut from the interviewee, the editor could always cut back to the noddy shot! My noddy shot was one from the camera mounted on my bike handlebars.

One big disappointment in making this video was than no matter which microphone I used, or no matter what tweaks I made on my computer, the recording volume seemed very low when I tried to narrate over my video. Eventually I did something really techy. I pulled my narration off my video, fed it into my Magix audio recorder, boosted the volume and put it back on the video. I have to admit I felt very pleased afterwards. Had I been a smoker I might have relaxed back in my chair and lit a big cigar feeling a little like David Lean, that master director and editor.

Actually, the sound still feels a little cranky but what the heck. A few captions and the addition of some royalty free music courtesy YouTube and all is looking much better. One day I might get a better microphone, a new computer, more megabytes and then, who knows what wonders I might bring to YouTube and the world of video?

Until then, click the video below for a quick trip around the block!

6 responses to “Cycling, Action Cams and Making the Video!”