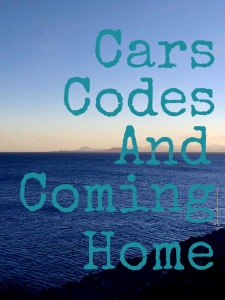 The end of a holiday is always a sad time, even more so when you’ve been away for a whole month. Our flight to Lanzarote was pleasant and comfortable but the return journey was on a different sort of aeroplane, one in which far too many seats were crammed in together and the flight was very, very uncomfortable. They just don’t make planes suitable for big people like me.

Anyway, our flight arrived in Manchester 20 minutes early and just as we passed through passport control we picked up a call from our lift; he had arrived and was in position at the drop off point just outside the Jet2 building. Happy days! A quick visit to the toilets and we made our way over but guess what? Our driver was nowhere to be seen.

We waited and waited and eventually gave him a call. The police, who are very sensitive regarding parked cars around the airport these days, had moved him on and he was about to turn round and come back. The big problem was that just up the road, a host of roadworks were in place denying traffic access to the roundabout. The only alternative was to carry on ahead on the M56 motorway so Jay, our driver was forced to carry on to the next exit and then turn back, a diversion that took him about 20 minutes to negotiate! When he finally arrived back we were cold and shivering, unused to the current February UK weather.

My lovely old motor, my Renault Megane convertible had been parked up for a whole month and I did notice, last I time I drove the car, that it wasn’t starting quite as promptly as it usually does. When I returned home my faithful motor was there just as I had left it, ready, or so I thought, to go. I sat down, felt the comfy leather seats, slipped in the key and everything lit up just as it should do. The only thing was that when I pressed the starter a groaning noise issued forth from under the bonnet and after a brief turn of the motor a red battery light began to flash on the dashboard.

There was nothing for it but to put in a call to the RAC. It was, they told me, a day of exceptional demands on their staff so my recovery agent would be on scene with me in anything up to 4 hours! Luckily, I had parked on a neighbour’s drive a few doors down the road so I went home to await the call from the RAC man who promised to call me when he was a few minutes away.

Almost three hours later, it was dark and cold and the RAC man arrived, promptly diagnosed a dead battery and offered me a deal on a new one with a five-year guarantee. I coughed up my credit card and not long afterwards I was back on the road. Later that evening I decided to take a run down to Manchester and spend some time with my elderly mother. Now one of the things I love about my car is the perfect opportunity it offers to listen to music. In fact, I think that listening to music in the car is really the only way to listen to music; clear and uninterrupted and driving seems to somehow put one in the perfect frame of mind to listen and enjoy music.

Driving to Manchester is a good 90 minute drive, mostly on the motorway and like any long journey I popped in a CD, slipped into first gear and settled down ready to chill with some of my favourite music, in this case a compilation I made myself from the Kate Bush double album Aerial.

Nothing appeared to be happening and I glanced over at my radio screen only to see not ‘CD loading’ as I expected but a flashing message saying ‘input code’! Yes, as the battery had been disconnected the radio had reverted to that regrettable situation, one I had not experienced for many moons, of requiring a security code to be input. By this time I was just joining the motorway and could only emit a silent scream of agony, compelled to continue my journey in silence instead of the musical interlude I was so looking forward to!

A few days later, back in St Annes I scoured through my collected motoring invoices and came across my original purchase note for my car. Was there a car radio code? No! A search on the internet provided various hits for people who would find my code for a price, the cheapest was in the £30 region. I did come across a forum where someone said Renault main dealers were happy to supply radio codes but the next comment was ‘no they won’t’

Anyway, undaunted I called the Renault dealer where I had bought my car some ten years ago. The lady who took my call transferred me to another lady and lo and behold, within moments I had the radio code! So, thanks to Blackpool Renault dealer Arnold Clark and that very nice lady, I was able to take my next journey with the chilled out sounds of Kate Bush playing on my in-car stereo. Pity I was on my way back to work!

Enjoyed this post? Why not try my book, Floating in Space, set in Manchester, 1977? Click the links at the top of the page for more information.