F1 testing has been in the news lately and as usual that got me thinking about the new season. Firstly, I have to start by saying that I was under the impression, apparently erroneously, that Formula One racing was to be the exclusive property of Sky TV in 2018. Apparently the exclusive Sky deal begins in 2019 so terrestrial TV viewers like me still have another year in which to watch Formula One without paying for a Sky TV package. Formula One is not what it was, well, not for me certainly but it is still Formula One, the highest level of the sport and it is difficult to give up the habit of a lifetime and stop following the F1 teams and their worldwide races. 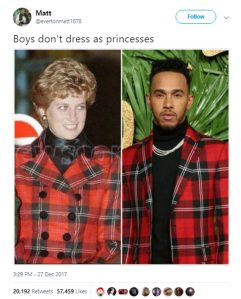 Let me start this post by looking quickly back at the 2017 season. Lewis Hamilton won the 2017 world championship taking his tally of championships up to four, joining Alain Prost and Sebastian Vettel, two other four-time champions. Lewis may be a great F1 champion but his efforts in the field of social media have not been so successful. He released a video berating his nephew for dressing up as a princess and as a result released a storm of social media controversy. I’m not sure why because it was a completely innocent fun family video but one quite funny response was a Tweet showing a picture of Lewis in a tartan jacket twinned with a picture of Princess Diana in a similar jacket. All good fun you might have thought but it apparently led to Lewis deleting many of his social media accounts. Oh well, stick to the motor racing Lewis.

Lewis’ new teammate for 2017 was Valtery Bottas who had a reasonable season, scoring his maiden F1 win and first pole position but the main challenge to Lewis came from Sebastian Vettel in the Ferrari who quickly won the opening round in Australia. Later, his campaign for the championship self destructed after not only car reliability issues but a major disaster when Vettel and team-mate Raikkonen collided with Verstappen’s Red Bull in Singapore. Vettel self destructed in more ways than one because in the Azerbaijan Grand Prix in Baku, cars were running behind the safety car and Vettel bumped into the back of Hamilton’s Mercedes. Thinking Lewis had given him a brake test he decided to drive alongside and bump wheels with the British driver in a decidedly unsporting gesture. As it happened, despite heavy criticism, he managed to escape a race ban.

The only other winners in 2017 were the Red Bull duo who scored a win in Azerbaijan for Daniel Ricciardo and wins in Malaysia and Mexico for boy wonder Verstappen.

2017 was the year in which McLaren lost patience with Honda and decided to end their fruitless partnership. In 2018 McLaren will be using the Renault engine and Honda will be working with the Torro Rosso team. Looking back at the success Honda and McLaren have had in the past, it’s hard to understand how this new partnership has failed but then again, I read an interesting article in the racing press last year about technology ‘cross fertilization’!

Let me explain. You’ve heard of Silicon Valley no doubt; it’s a place in the USA where computer and technology companies congregate. Companies working in a similar business and congregating in the same location is not a new idea. For instance, in the early 20th century movie makers set up shop in Hollywood, California, making it the centre of the movie making world. In the Formula One world a large majority of the current Formula One teams are located within 80 minutes drive of Silverstone circuit in Northamptonshire and the area has been nicknamed ‘Motorsport Valley’. The result of this closeness means that the staff of these teams live nearby and when they seek pastures new, just like their F1 driving counterparts, they move to another nearby racing team. This results in a broadening of the general F1 knowledge base as ideas move from team to team with each exchange of staff. In an article on the BBC website, I read that now almost 3,500 companies associated with motorsport are based in Motorsport Valley, employing around 40,000 people. That represents around 80% of the world’s high-performance engineers.

Paddy Lowe left Mercedes for Williams last year and no doubt the technical knowledge he brought with him will mean a step forward for Williams with their new 2018 car. Anyway, here’s my point: the exception to this rule of course is Honda, who reside on the other side of the world in Japan. No ‘cross fertilisation’ there! Perhaps that fact has played a part in their lack of success.

Fernando Alonso was relegated to the sidelines in 2017 but he has broadened his wings by competing in the Indianapolis 500 and has made plans to race in the Daytona 500 and Le Mans 24 Hours this year. He has made it known he wants to emulate the feat of Graham Hill; the only man to win the so-called triple crown of motorsport: the Monaco Grand Prix, the Indy 500 and the Le Mans 24 hour race. Of course, once he starts to be competitive in F1 again, perhaps those plans may go on the back burner. Still, part of his thinking must be to leave his mark on the motor sporting record books. If he cannot do this in F1 then of course he has to set his sights in another direction.

Talking of motor sporting record books, Lewis Hamilton, the current World Champion, has made major inroads on those records recently. In 2017 he became the man with the most pole positions, 72 at the time of writing, beating Michael Schumacher on 68 and Ayrton Senna with 65. Only two men have won more world championships; Fangio who won 5 and Schumacher who won 7. Schumacher also holds the record for the most F1 race wins with 91 victories and Lewis is now in second place with 62. Alonso has only 32 wins; still a great tally but he has a long way to go to get close to Lewis Hamilton. No wonder the triple crown looks so sweet.

F1 cars will look pretty different this year with all cars required to use the halo device, a sort of extension of the roll bar that extends all around the cockpit. Some drivers like it, some don’t but if it saves lives everyone should be giving it the thumbs up. Here’s what it looks like from a driver’s perspective:

Robert Kubica is a name you might remember from a few years back. Robert was an F1 driver, tipped as a future world champion, who was badly injured in a rallying accident in 2011 in which his arm was partially severed. Happily, the arm was sewed back on but with reduced mobility. Since then, Kubica has inched his way back to fitness and has completed numerous tests in an F1 car and has been in the running for a place in the Williams F1 team. Williams have run their quest for their 2018 drivers something like a TV talent show and their deliberations have been constantly in the racing media. Who is in the running? Who will get the drive? Well, it turns out it isn’t Robert Kubica but perhaps if something goes wrong for the main drivers, he might get a chance to fill in because he has been announced as Williams 2018 reserve driver. Not quite sure if I understand that decision because Robert Kubica as well as his undeniable talent, brings a lot of press attention to any team he is in, which is just what the team sponsors need. Can he cope with a modern F1 car? Hopefully, yes. The other two drivers, Lance Stroll and Sergey Sirotkin bring new talent and a great deal of financial backing to the team. Wonder what the main factor was in employing those two?

As I said earlier, 2018 will see a Renault engine in the back of a McLaren so hopefully Fernando Alonso will be up at the front of the grid again. If he isn’t, this season will be a disaster of epic proportions for McLaren who of course have dumped Honda because their engine wasn’t powerful enough. Toro Rosso will have the Honda strapped to the back of their cars so it will be interesting to see just how well they do in 2018.

One thing missing from the F1 grid this year will be grid girls. You know, the female promotional models who have been present on F1’s starting grids since -well, since forever really. New F1 owners Liberty Media say grid girls ‘do not resonate with our brand values’ so don’t expect to see pretty girls on the grid this year.

Will the racing be better or closer? The answer is anyone’s guess but Liberty Media also announced a revamp of its TV production this year. Apparently lower camera angles, improved on board footage and slightly later start times will improve the TV broadcasts. Liberty also have a much better appreciation of social media than predecessor Bernie Ecclestone which is why F1 video clips are much more prevalent on the internet today and why I can even link a few of them on this post.

So, F1 is improving the TV coverage and reaching out to internet users. Will the drivers and cars provide the excitement and competition we want? Well, to find out, make sure you tune in on the 25th March for the Australian Grand Prix season opener.

Steve Higgins is the author of Floating in Space, a novel set in Manchester, 1977. You can find the book at amazon by clicking here.