As you read this I will hopefully be making my way to France via the channel tunnel in Liz’s tidy little motorhome. This is not -as you might be thinking- my summer holiday. In fact its my pre-summer holiday! Yes, we are off to a wedding in the Alsace region of France and have decided to make the trip in the motorhome and make things into a mini holiday, a nice precursor to our main holiday also in France later in the year.

We have already had a trip to Scotland in the motorhome but this trip to France is one I’m really looking forward to. I really do love driving through France, exploring sleepy french villages, antique shops and of course, restaurants. If no restaurants appear on the horizon, which I seriously doubt very much, we can always park up and slap some sausages into the frying pan. Things taste so much better when cooked out on the road.

The forecast in France is not looking that great for the first few days which might come as something of a shock to our system as for the last few weeks the UK has been in the middle of a major heat wave. Garden hoses and sprinklers will soon be banned I’m sure and apart from having some trouble sleeping in the warm nights things have been very nice in the UK. We’ve had plenty of barbecues and for most of the time I have been wandering about in the same pair of shorts and an old vest, occasionally interchanged with a smart pair of shorts and a smart polo shirt when I have ventured out into town.

The weather has had quite an impact on our laundry as I have given up wearing socks for the duration of the heat wave. Shoes have been replaced by sandals and jeans have been pushed firmly to the back of the wardrobe. When the washer has been taken for a spin it’s so hot that the washing is dry in no time at all.

Many people have mocked me in the past for buying a convertible motor car. ‘When is he going to use that in rainy UK’ they may have thought? Yet how I laugh when I motor serenely by, roof down, sunglasses firmly fixed in place as I offer a cool wave to my friends, boiling in their conventional motor vehicles. I have heard some talk of ‘air con’ but what on earth is that? Must be bad for you and it really can’t compare to having the roof off your car and being bathed in fresh, warm, natural air, can it?

Last week our friend Veli who runs the Anotolia Turkish Restaurant in St Annes invited us to the launch of his new venture the Anatolia Sea View Restaurant down on the seafront. Veli must have some good contacts because also in attendance were the local mayor, the local MP and various minor celebrities from the north-west, including Bobby Ball whom UK readers may remember from the comedy duo Cannon and Ball back in the 80s. Anyway, it was nice to step along the red carpet and be handed a glass of bubbly by our favourite waiter Zoltan and nibble at various Turkish delicacies from the buffet.

I never used to be a great album buyer, in fact back in the 70’s and 80’s I was always a singles man but I do have a few vinyl albums in my collection. In the CD age I have built up quite a substantial CD album collection and it’s always nice to pick up a CD version of a classic vinyl album and I did plan at one time to gradually update my album collection from vinyl to CD like that, record by record. Then again, by the time I’ve finished I can imagine the CD will probably be defunct and some new technology will have replaced it.

What is interesting these days though is how bands tend to update their work and issue new versions of their classic stuff. We can now get classic albums ‘re-mastered‘ and with other versions of the original tracks. That is all very well but what it really means is that the record company can now add on a few extra quid to the price tag.

On the BBC a while ago I watched that late night show about classic albums and the subject happened to be Rumours, the hit Fleetwood Mac album. Rumours, in case you didn’t know, was released in 1977 and reached the top of both the US and UK charts. Four tracks from the album were released as singles and all did well in the charts. The BBC show revealed how the album was made and the personal relationship issues that fuelled the creative song writing. Following on from that I decided to do a search on Ebay for Rumours and spotted a ‘new’ version of the album for sale.

The version I saw on Ebay was remastered and claimed to be a deluxe and special version but after further searches and examinations, I now see that for a few quid you can get, quite cheaply, the basic CD version of the original album. Also available, a little pricier, is the ‘re-mastered’ version. For a little more money the remastered 2 disc version can be bought and for even more money, a remastered special 3 disc version. The 3 disc version was too pricey for me but after a few Ebay bidding excursions I managed to get hold of a reasonably priced 2 disc version. Now I had planned to save it for our journeys in France however, in France, as much as I enjoy driving there I do have to concentrate on what I’m doing because it involves driving on the wrong side of the road. In the UK I feel I’m something of an ‘automatic’ driver because I rarely think about my driving, I’m just on my personal auto pilot and my inner driver takes over. Not something that’s a good idea in France.

So, on my last block of night shifts before journeying away, I cranked up the old motor, slipped CD1 into the player and set off for work. It was good. Not quite as good as my Fleetwood Mac Greatest Hits CD but good all the same. CD2 was similar but was mostly alternative versions of the same tracks. Verdict: It was an OK album but not head over heels brilliant. Glad I didn’t fork out for the  3 disc version!

Anyway, here’s one of my favourite tracks.

Steve Higgins is the author of Floating in Space set in Manchester, 1977. Click the links at the top of the page to buy or for more information. 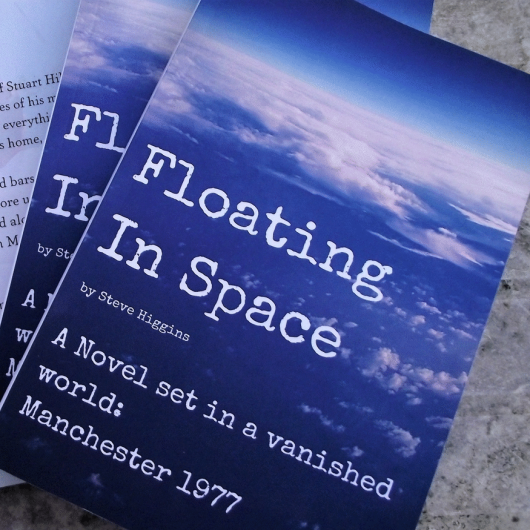 3 responses to “Rumours, Motorhomes and the Red Carpet Treatment”