I’m probably pushed to tell you the registration number of my current car but the registration of my very first car is still firmly anchored in my old memory bank.  It was PDB 71M, A Bond Bug, and for those of you who don’t know, a Bond Bug was a sporty little Reliant three wheeler car and I bought one because I failed my driving test twice and I could drive the Bug on my motorbike licence. 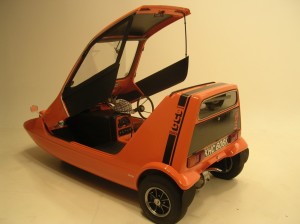 It was actually a pretty eye catching car for a three wheeler. No doors but the roof lifted up to gain access and the side windows were plastic held on by Velcro. I always remember bringing it home and showing it off to my family with a certain amount of pride and my Dad looking at it and saying “How are we all going to get into that?” Perhaps he thought I was going to take us all away for a holiday!

Still, we had some nice times, me and the Bond Bug but then one cold and snowy Christmas I decided to chance going out to a Christmas party in the car even though it was losing coolant. I topped it up with water and went off for a night of Christmas cheer. I walked home sensibly I might add, but when I returned the next day I found that the car had frozen overnight and it ended up having to have an engine rebuild. That was a pretty expensive night out! When I eventually  passed my driving test I got myself a proper car.

The other day I was tapping away on my laptop with the TV on in the background and I heard someone during a TV interview say that he wanted cars, personal cars as we know them, to be phased out in the next 10 years! Whoa! What was that? I grabbed the TV remote to rewind but accidentally switched off the TV and when I powered it up again the TV channel and the interviewee had disapeared. I don’t  know who that guy was but he was on cloud cuckoo land if he really thought it was feasible to take away motor cars from the general public.

The motor car is probably one of the great status symbols of our time and also one of those things that give us unprecedented freedom, certainly compared to our ancestors. Turn the clock back to the 1950s: If people wanted to get out and about and enjoy the great outdoors on a bank holiday the only way to travel was by bus or train. Yes, public transport was crammed with people in those days, all on their way to enjoy the great British seaside destinations.

Today, we are free of all those past restrictions, no waiting for trains or buses. It’s just a simple matter to pop outside, start up the motor and you’re off. The only restriction is probably traffic congestion. How many of us spend our bank holidays stuck in some traffic jam that clogs up the roads to the holiday hotspots? Either way, if that unknown politician really thinks the private motor car can be pushed aside he is in for a rude awakening.

I changed my car this week. I was sad to see my old car go because, well I’ve always liked it. It’s a very comfortable car, the reclining seat suited me very well and I had wanted a convertible car for a long time. It was so lovely in the summer to sit back, press a button and see the roof fold back into the boot. Air conditioning? Who needs it when your roof comes off! 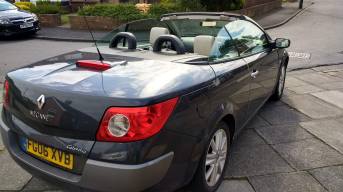 I did wonder about changing the car, then I thought why bother, why not wait until it finally dies the death. True, the ride had become a little rougher than usual but after a flat caused me to sort out a new tyre, the ride became smooth once again. I wavered then, should I change cars?

Then the passenger window jammed and not long after the boot jammed. I couldn’t free the window but found that the boot could be opened with the key, a physical key contained within the car’s key card. Opening the boot in this way was a real pain in the neck as the keyhole was located under the boot and sometimes, especially in the dark, it was hard to get the key in the slot. On one occasion I opened up the key card and out popped the battery so I had to rummage about under the car in the dark to find it.

Anyway, another car caught my fancy being sold by a friend at a very reasonable price. Normally I tend to stick with vehicles from a dealer because as I know very little about cars and anything mechanical, I like to buy something with a warranty and someone who will take away my old vehicle. 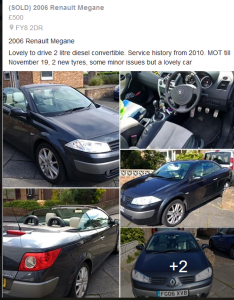 This new purchase meant I had to sell my trusty old motor myself so this being 2019 I nipped outside, took a few pictures on my mobile phone and put a short advert on Facebook. I sold the car the same day, not for a great price but much more than webuyanycar were offering!

All I had to do then was clear out my stack of personal stuff from the car, endless boxes of CDs, waterproof jackets, wellies and all sorts of other stuff I didn’t even know I was carrying.

There was one thing I left behind. Secreted somewhere in the car I was sure was a member of the spider family. He was a pretty active fellow, spending a lot of his spare time spinning a web across my driver’s mirror. I was sure he would continue to do a sterling job in that respect for the new owner.

Presently, that same day, the new owner arrived. She was actually a foreign lady although she arrived with an entourage of friends who, it seemed to me, were the real owners. They took a quick glance at the car and seemed happy. They were a little surprised to find the boot required a key but I did mention that in the advert. They were also concerned about the mileage and the seized window but again, I had mentioned that in the ad.

The cash was handed over and off my little car went. Hope they take care of it.

The owner of my new car was away for the weekend but she had left the keys and log book for me.

This being 2019 I was able to tax and insure my car online although I wasn’t too happy about the insurance. I can’t ever remember an insurer charging me to change my insurance to a new car. There has always been something to pay of course as usually I’ve moved up to a better, newer and more expensive car but a transfer fee? Well, I’m afraid I may be changing insurers when that policy comes up for renewal.

The next day I picked up my new car and settled into it. The boxes of CDs were transferred over, as well as the wellies and waterproofs and so on.

The great thing about my new car is that it can handle 5 CDs at once and when you are in CD mode the next CD plays as the last one finishes.

Ages ago I compiled my top 100 all-time favourite tracks so I wonder now if I could get all 100 on 5 CDs and play them back to back? 20 tracks on each CD, is that feasible? Oh well, time to get the laptop out and give it a try.

Once I had got my CDs set up I settled back and sorted out my seat and made myself familiar with all the controls. The cigarette lighter/charger was hard to find but a glance through the instruction book and there it was.

A few days later I was ready to take my new motor on its first trip to work. The CDs were all ready, I had fuelled up the previous day. I started the engine, slipped the lever into first gear and checked the mirror. What was this? On my wing mirror was a large and intricate spider’s web!