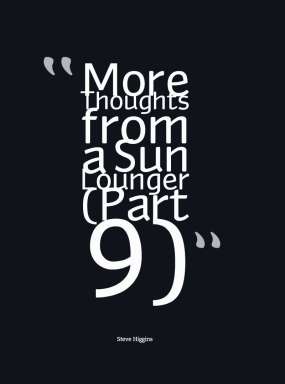 Once again we have motored over to France in our motorhome (or camping car as the French call them.) The weather has been great, in fact a little too great as a heatwave has descended upon France making things rather uncomfortable indeed.

As a result we parked up at the Lac d’Hommes, a lake with an artificial beach where the locals come to cool off. After a lovely cooling dip on a day when the mercury hit 105 degrees Fahrenheit (don’t bother asking what that is in Celsius because I neither know nor care!) I settled back on a towel on our groundsheet. Sadly, sun loungers were not available!

I know I’ve said it before but lying in the sun as the water drips off you after a swim is one of life’s great relaxing experiences. Here by the lake lying with my eyes closed I am bombarded by numerous different conversations coming from the busy lake. I can pick out various words in French that I know and I try to put together conversations based on those few words. The language of children squealing with delight as they splash about in the water though is universal. At one end of the spectrum are screams of delight, at the other end are the tears of some minor mishap and they die down when mum or dad come to the rescue.

Names are shouted across the waters of the lake and one urgent cry I heard was that of ‘Jean-Michel! Jean-Michel!’ Strange how brothers and sisters the world over always refer to their siblings with their full and proper names. My brother always calls me Stephen. Not Ste or Steve but Stephen and my childhood friends, brothers Tony and Chris, always referred to each other as Anthony and Christopher.

We arrived at the lake about 11am and after a few days here I think I have got used to the natural rythym of things. There are a few families here when we arrive but the second wave comes after the French lunchtime ends sometime after 2pm. The final wave of lake goers arrive in the late afternoon, just as we are about to leave, young men and women who have perhaps finished work or college.

One day we left the lake behind and moved towards the coast and the somewhat cooler climes of the French Vendée. Relaxing once again on our towels and groundsheet on the beach, the only thing I could hear when I closed my eyes was the crash of the waves on the beach. It was a hugely relaxing sound, very, very loud although we were about 100 yards from the sea.

Later we walked down to the sea wanting to swim but the breakers came in very fast. As we paddled barefoot out into the sea the sand gave way to a stretch of shingle and when I hopped from one foot to another to try and get away from the unexpected sharp stones, one huge wave knocked me right over and I fell over into the water momentarily shocked and confused.

I pulled myself up feeling rather silly and made my way back to the sand. No swimming today.

One of the reasons we came to France so early this year was to watch the Retro Grand Prix at Le Puy Notre Dame. It’s a vintage motor race through the streets of the village with pre war motor cars and motorcycles. The cars assemble in a makeshift paddock then make their way to the track, actually the village streets, lined just as they were in the past, with straw bales. Motor racing in the pre-war years was a different thing to modern formula one. Huge steering wheels without power steering, narrow wheels with tyres made for normal motoring, cloth helmets and goggles.

The stars of those years, people like Tazio Nuvolari, Prince Bira, and Henry Segrave were a different breed to modern drivers. Still, whatever the era, racing drivers the world over love the speed, the competition and the winning although winning a race in some of the classic cars we observed at Le Puy Notre Dame must have been a formidable achievement.

In between the races we settled down for some french sausage and frites washed down with a 2 euro glass of beer. I fancied another but we had come on the day of late racing; the activities start in the late afternoon and go on until late in the evening so I had to forgo that extra drink so we could drive off to find a quieter place to stop the night.

The heat of this summer heatwave is really hard to deal with. The usual frenchman or woman will just stay inside, after all, french houses are made with the heat in mind. Their stonework hugs the cool and their white exteriors reflect away the heat. A frenchman goes inside to cool down but in a motorhome, the interior is even warmer than the outside. Despite trying to park in cool shady places the motorhome is always hot and so we can only sit back and suffer the heat.

Shall we leave the doors open asks Liz? No, of course not I answer. Suppose someone comes in the night to rob us! However, what happens when the sweat is pouring down our faces? We leave the doors and windows open and security goes out of the window.

We stayed at one motorhome aire where there were showers. Showers, what a luxury. I don’t think I have enjoyed a shower so much ever. I was hot and bothered and sweaty and nothing seemed to combat the heat but after a cool shower, feeling cooler and fresh, suddenly all was right with the world!

Two things are always on my mind as a motorhomer; where can I stop the night and where can I empty my toilet? I worry about those things and it is always a great feeling to find somewhere to settle down for the night. We do consult various guide books and web sites like Park4Night and so far things have been fine.

On this trip one other thing has also worried me. Will we have enough water to drink? I find myself remembering something that happened years ago, cycling with my friends in the peak district and gasping, absolutely gasping for a drink. We stopped at a shop and I remember buying a big bottle of Dandelion and Burdock, my favourite childhood drink. We stepped outside the shop and my friend took a big gulp of his drink and me? Well I opened my bottle and drank the whole lot down in one long guzzle. I can still remember the feeling of refreshment that I felt back then, it was so wonderful.

Anyway, time to get that Pepsi out of the fridge!

Floating in Space is a novel by Steve Higgins set in Manchester, 1977. Click the links at the top of the page to buy from Amazon or for more information.