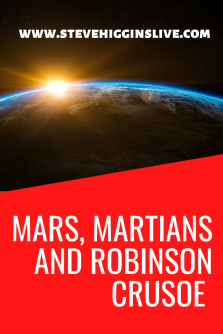 Many years ago, and I’m talking over thirty odd years (funny how certain things stick in your mind) I remember coming home after an early shift, making a brew and slumping down on the couch for a bit of a doze. I was idly flipping through the channels and came across Robinson Crusoe on Mars. I didn’t pay much attention at first but gradually I realised this was a pretty good film. Just recently that film came back to me for some reason and I started searching for it on eBay. Then one day, quite recently, I noticed it was showing on Film 4.

I settled down to watch expecting a black and white 1950s film but actually Crusoe was in colour having been made in 1964 and filmed in Technicolor. Paul Mantee plays astronaut Kit Draper who is forced to eject over Mars and drop down to the inhospitable red planet. Fellow astronaut Adam West, star of the 1960s TV show Batman, also ejects but is killed on impact. Kit Draper faces the gruesome prospect of suffocating when his air supply runs out. He finds a cave and starts a fire and is excited to find that the Martian rocks release oxygen when they are heated. Making a rudimentary pump, he is able to top up his air cylinders.

Every day, the stricken main body of the spacecraft hurtles overhead ignoring all Draper’s remote signals to land. Later, in frustration, he presses the destruct button and blows the ship up.

He has a recording unit into which he keeps us, the audience, updated with his thoughts and feelings which of course is pretty handy in a film that is mostly following the actions of one single man. Later on Crusoe finds his Friday, an alien on the run from other aliens whose spacecraft dart through the skies above Mars looking for him.

I won’t tell you how the film ends just in case it comes up on your TV set anytime soon but Robinson Crusoe on Mars is a film well worth watching if you like sci-fi. It’s well made and interesting and even looks at the psychological side of being marooned when Kit starts dreaming about meeting his dead partner. The effects are pretty reasonable too and unlike many films of the period, they show space craft whooshing across the screen just like in Star Wars, not released until 13 years later.

Just recently I was mooning about the house suffering from a really upsetting tummy bug so what else was there to do except slump in front of the TV? As I slipped through the channels I came across this movie, The Martian, a 2015 film directed by the renowned Ridley Scott, director of Alien and Gladiator, and starring Matt Damon.

Martian is surprisingly similar to Crusoe in many ways. The crew of a Mars mission is on the surface when a major  dust storm threatens to topple over their space vehicle. The crew decide to abort the mission and take off but one crew member is hit by debris and presumed dead and they leave him behind. Later, Mark Draper played by Damon awakes from unconciousness in the desert and makes his way back to the martian base camp. The bio-data telemetry from his space suit had been damaged and so made mission control assume that he was dead. Now the martian base camp is pretty basic and although it has computer stations and food and water and so on, there is no communication to earth. The next mission is not due for four years so Matt Damon’s character must find a way to survive until then on the camp’s meager supplies.

Draper decides to make part of the camp into an area where he can plant some potatoes and hopefully produce more food.

Just like in Crusoe, Mark Draper keeps us interested in what is happening by recording his thoughts in a video diary. Not only that but back on earth, observatories notice the activity taking place on Mars and realise Draper is still alive.

Still unable to communicate with earth the marooned astronaut decides to dig up an old space probe, drag it back to base, plug it into a power cable and use it for commumication. I won’t ruin everything for you by telling you everything but again, if you like sci-fi and perhaps even if you don’t, this is such a well made  and enjoyable film and well worth watching.

Just to finish off this post I thought I’d give you a little info about Mars itself. It is also known as the Red Planet and is the fourth planet from the sun in our solar system. Mars has a thin atmosphere and a surface with valleys, deserts and even polar ice caps although pitted with craters like the moon. In the past many astronomers have commented on the so called martian ‘canals’. In the modern era, these have been revealed as optical illusions made by astronomers using low resolution telescopes. Modern hi-resolution photography and close up shots by unmanned spacecraft show no such features.

Mariner 4 was the first spacecraft to approach Mars making its closest approach in 1965. In 1976 Viking 1 made a soft landing on Mars. The Soviets had done so 5 years earlier but their spacecraft failed soon after touchdown. In 1997 the Mars Pathfinder arrived on Mars and released its robotic rover. Since then other spacecraft have successfully landed on or orbited the planet including one from India in 2014.

Below is a video from the Mars rover Curiosity from 2019. Technology, isn’t it amazing?

Floating in Space is a novel by Steve Higgins set in Manchester 1977. Click the links at the top of the page to buy or for more information.

Leave a Reply to Yeah, Another Blogger Cancel reply