I’ve always been a sci-fi fan but when I was a child growing up in the 1960’s I was probably more interested in science fact. The sixties was the time of the space race and the Gemini and Apollo missions were covered in great detail on TV and when I say covered I mean full features and bulletins and not just a one minute item on the news.

I don’t know if you can imagine the excitement of a twelve year old boy, getting up for school one day to find the TV on and Neil Armstrong walking on the moon when the usual TV broadcast at that time would have been the test card! How my Mother eventually managed to pack me off to school I do not know.

The moon landing was covered on UK TV by both the BBC and ITV although in our house we watched the BBC coverage exclusively. Cliff Michelmore was the main presenter but it was James Burke who explained all the technical stuff.

The launch of the Apollo missions was always a highlight for me. Although I enjoyed all the other elements too like the crew broadcasts from space, and those from Mission Control in Houston especially when a major decision had to be taken, for instance, ‘are we ok for lunar trajectory insertion?’ And the answers would come from the experts around the control room:

And so on round the room.

Now the Space Shuttle has been mothballed there are very few launches from Cape Canaveral. (Originally I had written Cape Kennedy there but as usual after writing stuff I did a quick search on the internet to check my facts and found, surprisingly, that Cape Kennedy reverted back to its original name of Cape Canaveral in 1973. I never knew that!) But another highlight of TV space coverage was in 1968 when Apollo 8 made the first manned trip to the Moon. Apollo 8’s mission was not to land but to fly to the Moon, orbit and return to Earth. The three crew members were Commander Frank Borman, James Lovell, and William Anders.

They were numerous broadcasts from the crew, especially during their orbits of the moon and they sent back to mission control their impressions of the lunar surface, Lovell commenting that “the Moon looks like plaster of Paris or sort of a greyish beach sand.”

Every time the spacecraft passed behind the Moon radio transmissions were blacked out and the crew and ground control were relieved to hear each other’s voices once again when they came back, unscathed, from the far side of the Moon.

The crew of Apollo 8 were the first in history to see ‘earthrise,’ the Earth emerging from the lunar horizon. The crew all scrambled for their cameras but it was Anders who took the famous colour photo seen here. 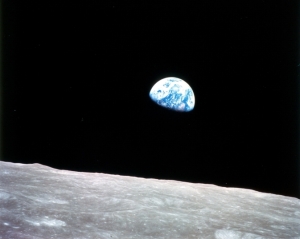 The most moving broadcast ever was when the crew read lines from the book of Genesis and Borman finished by saying “and from the crew of Apollo 8, we close with good night, good luck, a Merry Christmas and God bless all of you – all of you on the good Earth.”

Every time I see a documentary about the Apollo programme that includes that includes that transmission I can feel myself taken back to Christmas of 1968 and once again I become that same small boy, glued to our old black and white TV set.

I must remember to ask my Mum though, how did she manage to get me off to school on the day Neil Armstrong walked on the moon?

Floating in Space is a novel by Steve Higgins set in Manchester, 1977 available from amazon.