My book, Floating In Space is set in the Manchester of the late seventies. A pint of bitter was 25 pence. There were no smartphones, no Internet and no wireless networks. In fact ‘wireless’ was an old fashioned word for the radio. I’m tempted to say that things moved at a slower pace then but that’s not true. Things just moved at a different pace. In 2015 you hear a lot about pubs closing down but back in 1977, pubs were far from closing down; at the weekend they were the place to be! That was where my friends and I met up, drank beer, listened to music and chatted up the ladies. Saturdays were the focus of our week and here’s an excerpt from Floating In Space where Stuart, the narrator, talks about the upcoming Saturday night. 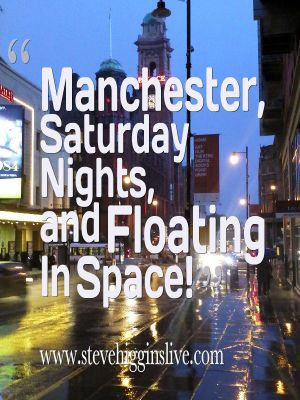 Saturday night was in a lot of ways the culmination of the weekend. I always preferred it to Friday nights because things were more relaxed, there was no rushing home from work, no rushing to get your tea down your neck so you can get changed, then leg it out for the bus. Saturday, you could take your time and leisurely work up to things. Sometimes I would go out shopping and buy myself something new to wear for that evening, a shirt, or perhaps even a new pair of trousers. Then later I would have a long relaxed soak in the bath, and dress unhurriedly in my room to the tune of my favourite music. In 1977 my favourite album was Elton John’s ‘Goodbye Yellow Brick road’, and as I dressed I would mimic Nigel Olsson’s measured and rhythmic drumming to ‘The Ballad of Danny Bailey’, or ‘Candle in the Wind’.

There was something about Saturday nights in Manchester. Some quality of security, of expectancy, a feeling that the night and the future were going to be good. A feeling that you might just ‘get off’ with some gorgeous girl and that even if you didn’t it didn’t really matter because there was always the excitement of the people, the music, the drink, and everything else that made up the evening. And then there was always the expectancy of the next night, and the next, and on and on into the future. The past building up inside you like a great data bank, reminding you, reassuring you, like a light burning in some empty room in the corner of your mind.

The main venue that night, and on many other Saturday nights like it, was the ‘Playground’, a small disco bar on Oxford Rd in the town centre. Flickering multi-coloured spotlights rotated across the red carpeted room, which, on Fridays and Saturdays was generally packed. It had a small dance floor sunk low like a pit, where people up on the raised bar level could look down at the gyrating girls, and where also, on week day lunchtimes, a topless dancer appeared at the stroke of one o’clock to translate the soul and disco music of the time into pulsating physical motion, the eyes of jaded office workers glued to her as she did so.

My friend ‘Matty’ Edwards and I used to meet up in the Salisbury, by Oxford Rd station, have a few pints and a bit of a natter to any Regal cronies who we might find there, then make the short walk to the Playground. There was a paltry fifty pence charge to get in, the solitary bouncer was silent, but not unpleasant, and the DJ, who always began the night with ‘Loves Theme’ by the Love Unlimited Orchestra, played alternate sessions of rock, disco, and chart music. We were both mad about Jenny, the barmaid. She was lovely. She had a kind of round, open face, framed by thick blonde hair and her skin was a creamy white. She served us Worthington ‘E’ and we melted into the hubbub of people on their Saturday night out while the music of the seventies drifted through us.

Matty was tall; he had lazy, rather hayfevered eyes, and a biggish nose over thin lips. His brown hair was short and untidy and he dressed smartly, but had a sort of ‘middle of the road’ taste in clothes.
“Jenny’s looking gorgeous tonight,” he told me over his pint of Worthingtons.
We were propped up at the bar in a convenient spot where we could eye up any possible female talent, and cast a fond eye over Jenny’s appealing form.

“You’re not wrong mate.” I agreed. “I wouldn’t mind getting a grip of that myself.”
I caught Jenny’s eye and ordered two more pints of Worthington ‘E’. It wasn’t a great drink but we were tuned into it now for the rest of the evening, and anyway, I hadn’t as yet developed any clearly defined tastes in beer. The first pint I ever ordered myself was a pint of mild, and that was because I had nervously entered a Cheshire country pub after a long cycle ride and hesitatingly asked for a pint of ‘beer’.
“A beer?” asked the barmaid.
“Yes,” I replied, “A pint, please.”
“A pint of what?”

I realised, uncomfortably, that something more was required. I had thought that ‘a pint of beer’ would have been enough, but what the barmaid wanted to know was did I want bitter, or lager, or mild even? My first tentative forays into the world of the alcoholic drink were with my friend Mike Larini and it was always he who had done the ordering. What did he ask for, I thought? I couldn’t remember but down the bar the faint voice of an old man asking for half of mild drifted along to me, and so I went on to drink mild.

Later I changed to bitter, and even now I was currently considering another change as someone had given me the cheerful news that bitter ‘rots your guts’. Perhaps it had been that eternal pessimist Matty Edwards with his inside knowledge of beer. His father was a Didsbury publican, and Matty’s drink changed from pub to pub. Sometimes it was lager, sometimes bitter, but here, in the Playground, it was that now long departed brew, Worthington ‘E’.

You can read on and find out what happens to Matty and Stuart on that and other Saturday nights. Click the icon below to go to my Amazon page or click the links at the top of the page to find out more about Floating In Space. 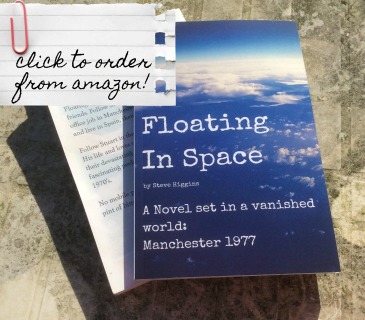 6 responses to “Manchester, Saturday Night, and Floating In Space”