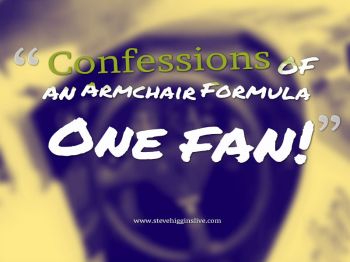 I’m not a great sports fan but I do like my motor sport. I first started following Formula One back in 1970 when I was a school boy.

1970 was a pretty exciting year for formula one racing. Colin Chapman and his Lotus team had unveiled their new Lotus 72, a revolutionary ground-breaking car that set the standard for formula one cars for years to come. Jochen Rindt won the World Championship but sadly he was killed in practice for the Italian Grand Prix at Monza. His points score was never overtaken and so he took the crown posthumously. In fact three F1 drivers were killed that year, Rindt, Bruce Mclaren, the founder of the Mclaren F1 team, and Piers Courage who drove for Frank Williams, a black year indeed for motorsport.

Back in the early 70s there wasn’t great TV coverage but I do remember watching the Monaco Grand Prix live on the BBC and I will always remember that moment when the potential winner, old hand Jack Brabham, slipped into the barrier on one of the last corners letting Jochen Rindt through to win.

A few years later the BBC was not happy about the explosion of advertising on Grand Prix cars and the crunch came when the cars of John Surtees displayed advertising for Durex. The BBC pulled the plug and F1 effectively vanished from British TV screens for a long while. Towards the end of the seventies the BBC began to broadcast the odd race now and again and then their show ‘Grand Prix’ with long time commentator Murray Walker began in 1978 although I don’t think they broadcast the entire season until 1979.

For most of the seventies I had to depend on BBC radio to find out what had happened at the Grand Prix. In 1978 I listened to a report from the Italian Grand Prix about a crash just after the start in which Ronnie Peterson was injured. Ronnie had broken both legs and been taken to hospital. I was glad to hear he was OK. Ronnie was one of those drivers who appeared to me to be destined for a world championship. If someone had told me in the early seventies that Niki Lauda would be a three times champion I would have laughed out loud. He didn’t look or sound like a champion, unlike Ronnie, his team mate at the STP March team in 1972. The next day I picked up a newspaper and was shocked to find Peterson had died during the night from a fat embolism resulting from his broken bones.

Senna, Mansell, and Prost were the great drivers of the eighties and Gerhard Berger sometimes looked like a future champion although he never made the cut. He survived a terrible crash at Imola in 1989 when he hit the wall at Tamburello and his Ferrari burst into flames. I was watching the race live and thinking how could anyone survive that but moments later a marshal’s van drove up and quickly put the fire out. Berger survived with only 1st degree burns to his hands.

Mansell won a great race at Silverstone in 1987, probably one of my favourite races. It was a gamble on Mansell’s part, turning up the boost on his Honda turbo engine to catch Piquet and on the last lap he should have ran out of fuel. According to his dashboard he had, but his Williams somehow kept running to the end finally grinding to a halt on the slowing down lap.

Alain Prost retired after a comeback season with Williams when he walked to his final world championship in 1993. In 1994 the Grand Prix circus came to Imola for the San Marino Grand Prix and I remember well watching the race live on TV when Senna crashed, again at Tamburello. Someone said to me ‘he’s dead’ but I disagreed, Berger’s crash was worse and he survived. Sadly, Senna did not.

Television has had a great influence on formula one racing. In the nineties Bernie Ecclestone seemed to be trying a lot of tweeks to get more viewers, especially after one rainy Saturday qualifying round when hardly any drivers went out on track. Naturally really because they could not hope to improve on the previous day’s dry running. That spelled the end of Friday qualifying and from then on, only times set on a Saturday counted towards the grid. That tweeking resulted in an interesting knockout qualifying format which is enjoyable and good for the sport but it hasn’t stopped the rulers of F1 trying to fiddle with it even more and that interference has cast a cloud over the first part of the 2016 season.

Formula One team bosses are currently in something of a panic. Investors have poured millions of pounds into F1, not because they like the sport but because they find their investment can pay off big style in these days of multi million pound global TV and advertising deals. Reports of failing interest in the sport however has rung alarm bells and throughout the motorsporting media there have been calls to make F1 more interesting. Why are the cars not louder? Why are Mercedes winning all the time? Should we bring back refuelling? Is the high tech aspect ruining the driver input? There are even calls for Bernie Ecclestone, the aging F1 emperor to hand over to someone else. Only time will tell what will happen.

It sometimes makes me smile when I compare Formula 1 to other sports like cricket. Can you just imagine if Ecclestone and his investors had a stake in cricket and the TV viewing figures were down? What would happen then? Increase the number of overs? Maybe have an extra ball in each over, seven instead of six? Change the wooden ball to a rubber one? Add an extra stump?

Maybe they will resolve the issues, maybe not. F1 racing goes from terrestrial channels to Sky pay per view in 2019. Will I be subscribing? I’m not so sure . . .

If you liked this post why not try my book? Click the links at the top of the page for more information.

One response to “Confessions of an Armchair Formula One Fan”