This web page announces me as Steve Higgins: writer and Blogger, but writing is something I do in my spare time. I do have a day job. My usual place of work is an emergency control room and this last weekend my team and I have dealt with two fatalities on our night shifts. 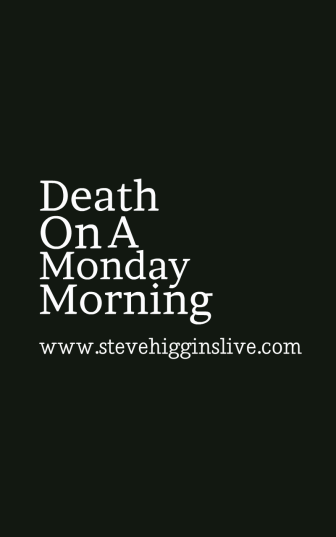 The first one involved a pedestrian who crossed the M6 motorway running lanes and was hit by a car. Police officers believed he had spent the afternoon and evening at a nearby race course, attended some evening festivities and for whatever reason, decided to walk across six lanes of motorway traffic. Initial reports were for a drunken pedestrian so I can only guess that the man was intoxicated and in that inebriated state made a foolish decision and was killed.

The other death was different. A lady driver spun on the motorway and her car was left sideways on in the carriageway. It was an unlit section of the motorway, it was night or rather early morning. The next vehicle along was an HGV which crashed into her just as she had got out of her car to examine the damage.

As I drove home the next morning I thought about the woman. She may have been on the way to work on an early shift. Perhaps she worked like me in a control room. Perhaps she worked for a transport depot or it could have been anywhere that has 24 hour a day working. I did’t know where she worked or anything about her at all really but I imagined her getting up early, perhaps shutting her alarm off quickly so as not to disturb her partner, if she had one of course. I imagined her getting ready for work, hurrying on to her appointment with death. Perhaps she had a tea or coffee before leaving. I always have a tea and some cereal in the morning or even my favourite fast food- toast. Perhaps she would have said goodbye to her husband. Perhaps not, after all, she would be seeing him later. I can imagine her hurrying if she was late, hurrying to her doom. If only her car had not started.

If she had a car problem she would perhaps have had to call the RAC or AA. They usually take about an hour to arrive. They might have fixed the car after say, thirty minutes or so and she would be back on her way. The spot where she would have crashed would have been full of slow traffic an hour or more later and she would have been forced to slow. Her boss might have told her off, her colleagues might have been annoyed, perhaps they had missed a break because she was late. You can imagine the conversations about that missed hour. Would she have to say behind after work to make up the time? Would her employer take an hour’s pay off her? Either way, she would be alive and well and would see her husband again at the end of the day. Not now, though.

Strange isn’t it, to look back and think what might have happened? I’ve written posts in the past about James Dean and Marilyn Monroe and as I look at the minutiae of their last hours, I’m sometimes drawn to certain things, certain decisions they made and think, if only they had done this, or that, instead, they might have avoided their fate. Still, you cannot change the past. You cannot undo what has happened.

Later, I found an article in the Manchester Evening News about this fatality. The lady in question was a young woman. She was not on her way to work but on her way home so a lot of my assumptions above were incorrect. Either way, she was killed. Whatever plans she had for the future, nights out, holidays, all gone.

If there is a message there, it is this; wherever you are, enjoy your life and your days on this earth, for they can so easily be taken away from you.

Steve Higgins is the author of ‘Floating In Space’ available from Amazon.