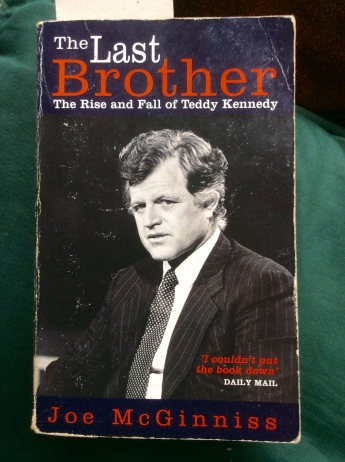 The Last Brother by Joe McGinniss

The Last Brother as you can see, is subtitled, the Rise and fall of Teddy Kennedy. In a lot of ways Teddy is only incidental to the story told here because it is really the story of his father, Joe Kennedy, and his rise to success. Joe’s success lay not only in the business of banking but during the prohibition years he made a fortune in bootlegging and naturally rubbed shoulders with a number of gangsters. When he became successful, Joe wanted something more; he wanted political power. It was then that he attached himself to Franklin D Roosevelt. He helped Roosevelt’s campaign in many ways and when Roosevelt became president, he, like all presidents, had to reward those who had helped him. Joe became ambassador to the UK and it was there that his fall from grace began.

The ambassador and his family quickly became celebrities in England. In fact, Teddy Kennedy made his first public appearance as a young boy, the ‘baby’ of the Kennedy family and the son of the Ambassador, when he was invited to open pets’ corner at London Zoo.

However, In Joe’s eyes the coming war with Nazi Germany spelled the end of all he had worked for. He could not see how the UK could resist the might of the Nazis and was not slow in saying so. Kennedy advised Roosevelt that the British were finished. However, when Winston Churchill became prime minister in 1940, Churchill opened up direct communications with Roosevelt himself making Ambassador Kennedy almost superfluous.   Later, the family returned to America with Joe not perhaps in disgrace but acutely out of step, and the relationship between Churchill and Roosevelt flourished. 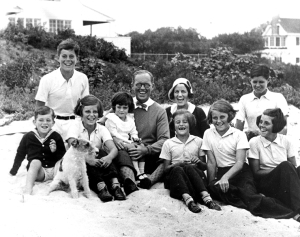 Kennedy left the Roosevelt administration but he wanted political power for himself and made sure he would find it through his financial wealth, and through his sons.

Joe Kennedy junior was the son that Joe meant to make into America’s first catholic president. His brother, John Kennedy, known as Jack by the family, was a poorly lad afflicted by Addisons disease and constant back pain. In World War 2 Jack joined the navy but began an affair with a Dutch journalist, Inga Arvad. Inga was thought to be a Nazi spy so Joe immediately arranged for Jack to be posted well away from Inga to South Carolina. Bored with his desk job in South Carolina, Kennedy volunteered for the Motor Torpedo Boat Squadrons and later took charge of his own boat, PT 109. He was awarded the Purple Heart for his bravery in rescuing his men when his torpedo boat was sliced in two by a Japanese destroyer.

Joe Kennedy Jr was not at all happy when he heard about the award. Competitiveness was drilled into the Kennedy clan from an early age and Joe did not want his younger brother to top him. Perhaps that is why he volunteered for a dangerous mission. The mission involved a radio controlled plane, full of explosives that were to be remotely steered to a target in Germany. Joe’s job was to take the aircraft into the air then bale out when the radio control was activated. Sadly the aircraft’s explosives were detonated prematurely and Joe was killed.

Jack knew then that it was he who would have to fulfil his father’s desire for the presidency.

Joe used his influence, and his money, to get Jack first a seat in congress and then a seat in the senate. In 1960 it was time for him to fulfil his father’s dream and go for the presidency. Lyndon Johnson wanted the democratic ticket that year and he began by attacking the the Kennedy candidacy. He described him as ‘a little scrawny fellow with rickets’ but soon the influence of father Joe came to bear and Johnson ceased his attacks. Johnson knew that that Joe Kennedy would pull out all the stops for his son to win but he hoped that if the vote wasn’t decisive on the first ballot he would have a chance on the second one. As it happened, John F Kennedy won the nomination on the first ballot. According to McGinnis it was Joe who wanted Johnson as JFK’s running mate; perhaps that was payback for Johnson laying off his attacks on Kennedy’s health issues.

The election was close, very close indeed and Joe decided he needed help from a rather unsavoury corner; he turned to his former prohibition gangster contacts, notably Sam Giancana to help him secure victory for his son. That help would come at a price. Giancana wanted back the casinos in Cuba that used to make millions for the mob until Castro overthrew the Batista regime, closed down the casinos and threw the gangsters out of Cuba. Giancana wanted them back.

Kennedy won the election by a narrow margin but things went wrong almost straight away. CIA backed revolutionaries were training in secret Florida locations for an assault on Cuba but the plans were in disarray and the president rejected many of them, When the attack came it was a disaster. Kennedy accused the CIA of trying to force him into a full scale US assault on Cuba and he would have none of it. Giancana would not get his casinos back. Worse, the president had engaged his brother, Robert Kennedy as attorney general and he began an assault on organised crime in the USA. One of the mafia bosses was heard to mutter in Sicilian, “who will get the stone out of my shoe?” It was more of a threat than a question.

Joe Kennedy was struck down by a stroke at the age of 88 and rendered unable to speak. The chief fixer, paymaster and head of the Kennedys was unable to carry on talks with the mafia and the time had come to remove the stone from Giancana’s shoe.

President Kennedy was assassinated in Dallas in 1963 and his presumed assassin Lee Oswald murdered days later inside the Dallas Police headquarters. At the Kennedy home in Hyannis Port nobody wanted to tell Joe. He must have known something was wrong but he could only point numbly at the TV in his room that remained firmly switched off. Ted Kennedy, who was sent to tell his father the news, struggled to get the words out until his sister Eunice blurted out the truth.

Robert Kennedy was shot in 1968 as he prepared for a late campaign for the Democratic ticket. After winning the California primary he said a few words to his supporters and was shot moments later.

Ted Kennedy now had a surplus of Kennedy advisors and aides, all willing him on to go forward and run for the presidency. He declined even though a ‘draft Ted Kennedy’ movement had started to gain momentum. Instead people looked forward to 1972 when Teddy, the last remaining Kennedy brother would restore the lost kingdom, the lost Kennedy leadership but it was not to be.

In 1969 Kennedy attended a boating regatta at a small island called Chappaquiddick. Numerous parties were planned for the weekend; one was a gathering of the so-called ‘boiler room girls’ – a group of women who had been part of Robert Kennedy’s campaign team in 1968.

Kennedy apparently left the party late in the evening, supposedly to go to the island ferry with one of the girls, Mary Jo Kopechne but instead turned across a small bridge that led to the beach. Kennedy lost control of the car and the vehicle plunged upside down into a small lake. Kennedy somehow escaped leaving Mary to die in the car. Police divers found her body the next day, her head in a small air pocket in the foot well of the upside down car. Kennedy did not report the incident until nine hours later. What happened in those nine hours is open to question but the Police seemed to gloss over the numerous inconsistencies in Kennedy’s story and eventually he received a suspended sentence for leaving the scene of an accident.

On the cover of the book is a remark from the Daily Mail reviewer that he couldn’t put the book down. I was just the same and was engrossed from beginning to end. The writer seems convinced of his central thesis, that Joe Kennedy’s pact with the mafia was a poisoned chalice that became the downfall of his sons and his family. Maybe that is true, maybe not but McGinniss puts forward an interesting theory and a fabulous read.

Joe Kennedy died in 1969, his dream of securing the presidency for his sons lay in ruins, leaving nothing but heartache and sadness. Fate had delivered many cruel blows to him but lying mute and unable to communicate while his family suffered must have been the worst.

Ted Kennedy continued in the senate until his death in 2009 from brain cancer.

2 responses to “The Rise and Fall of the Kennedys”