Getting older is a strange sensation. Once you reach a big birthday like sixty you start to re examine yourself and start to silently ask lots of questions. Inside, I’m the same person I always was: The same in fact, that I have been since I was a child, at least to me, at any rate. It’s only the outer layer that has changed. The outer layer has got fatter, heavier, and somewhat grayer. But inside, the essence that is me, the real me, is essentially unchanged. What is my essence though? What am I? How did I come to be, what purpose, if any, have I served?

Those questions are ones which people have been asked over and over for millennia and of course, will continue to be asked over and over again. As for the answers, well that is something different. I could quite easily be an accident of fate, just like the rest of the population, like the insect and animal world, like plant life, like the earth itself. It could be that the Creator of All Things, God, Allah, or whatever you like to call Him created us all, and that every step we take has been pre-ordained in some way. It could be that when we die we vanish, or it could be that our spirits live on, that you and I have lived before and will live again. Who knows?

It’s interesting to think that in some eastern religions, they believe that we are all born with a finite set of breaths. Breath then, in such a religion, is life itself, and when our allotment of breaths has gone, we are no more. Yoga, the understanding and practice of breathing was understandably very important to ancient people, perhaps for that very reason itself, for by controlling breath, one can live longer. It’s an interesting thought.

Another interesting concept is Samsara. In the Buddhist faith there are three primary states, birth, death and rebirth. Samsara is the wheel of life and only those Buddhist scholars who can escape from the cycle of life by meditation are those who achieve enlightenment, which in its highest form is nirvana, freedom from rebirth.

Normally, I think I would have probably taken my new birthday and my age in its stride but the big six zero does have an effect. Recently I have been on the look out for new jobs. Something more challenging, something different to what I do at present. I’ve started looking at roles outside of what I do in my day job, jobs involving social media, blogging and so on. Of course things aren’t like the old days, in the 21st century you cannot get a job without a qualification and the fact that I’ve been writing this blog for two years now, and single-handedly producing the graphics and the videos and promoting it all on Facebook and Twitter doesn’t really mean anything, not to an employer anyway. A degree in social media is what employers want. Anyway, two letters I received lately stopped me in my job hunting tracks. One was from an old employer saying they were ready to pay my pension and how and when did I want it: A lump sum? Monthly payments or a combination? Interesting, I thought. Then I got one from my current employer telling me I could retire if I wanted to or go part-time; semi retired. Well, wasn’t expecting that.

Yes, the thought of working part-time is starting to appeal to me. I’ll have more time to write, to make my videos and to create my graphics. Time to finish that second novel. Perhaps even time to take up a social media course! I’m not sure what to do but, if I continue to think about life, the universe and everything, taking up a philosophy course and really looking into the meaning of life might be an option!

It may be that the only meaning to this life is the one that you yourself give to it. I’ve always taken inspiration from that fine poem the Desiderata that says in part, ‘no doubt the universe is unfolding as it should.’

We can only suppose it is. 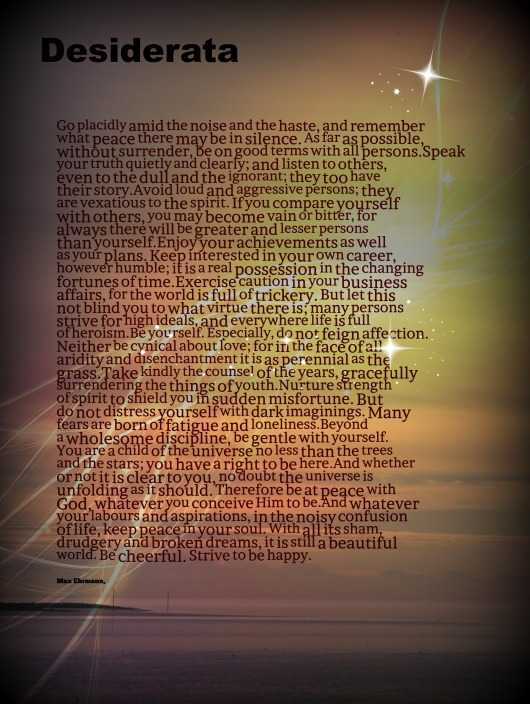 If you enjoyed this post, why not try my books? Both are available from Amazon as a Kindle download or as a traditional paperback. Floating in Space is a novel set in 1977. A Warrior of Words is a poetry anthology. Click the links at the top of the page to buy or for more information.