It’s interesting that on TV, the same movies come at us time after time. The Great Escape, wonderful film though it is, has been broadcast so many times I know the script off by heart. The Bond films are a staple of UK TV. They and the Die Hard films, the Carry on series and a hundred others–they are all constantly on British TV. Old TV shows are another staple of the new free view channels.

In fact, just lately a lot of my favourite shows from when I was a school boy are currently being shown on TV: The Saint, Land of the Giants, The Invaders and many more. (Wish they’d get around to showing the Time Tunnel though!) Some things that rarely, if ever, are repeated, are old TV documentaries and old made for TV movies. Here are three of my favourites, two documentaries and one made for TV movie, preserved for my viewing pleasure on trusty old VHS video tape.

The Peter Sellers Story: As He Filmed It.

The BBC Arena team made this film about Peter Sellers in 1995. It was created largely from cine film shot by Sellers himself, who was a lifelong camera enthusiast. The original documentary was made in 1995 and if I remember correctly, Sellers’ widow, Lynne Frederick had died and left behind a lot of Sellers’ effects, including his home movies which is how the film came to be made.

Normally, I’d say that you have to be interested in movie people and how movies are made to like this documentary but this film is so special I don’t think that rule applies.

The original film was in three parts and began with Sellers’ early days, and his early films. The first cine films we see are black and white movies and as Sellers’ career takes off, his cine equipment also improves and he upgrades to colour and then on to sound. His own images show his young self as a sort of ‘spiv’, a Flash Harry sort of character with his double-breasted and shoulder padded jackets. An uneasy relationship with his mother emerges, as does a rather spoilt and volatile personality. His first wife talks about their early days and their life together and friends like Spike Milligan talk happily about successes like the Goon show and their beginnings in show business. Milligan had a 8mm camera and Sellars a 16mm one. Of course ‘Peter was richer,’ comments Milligan. ‘Richer by 8 millimetres!’

Sellers’ cine film is blended with interviews from various people who played a part in Sellers’ life.

A fascinating section concerned Casino Royale, the spoof James Bond film. Various directors were involved but Joe McGrath shot one segment with Peter Sellers and Orson Welles. McGrath was a TV director relishing the move into feature films, that is until Sellers told him he didn’t want to be in the same shot as co-star  Welles. A heated debate ensued which became physical. Sellers said he was going off to calm down. He never returned and if you ever see the completed movie, you’ll understand why Sellers’ character abruptly disappears too!

Sellers claimed to have no personality of his own and ‘borrowed’ them from the characters he impersonated. It’s interesting to watch the TV interviews  included in the film where Sellers seems to mimic the Yorkshire tones of Michael Parkinson and again, in other snippets he is taking on the accents and style of his interviewers.

The film overall has a sort of melancholy feeling which I feel accurately represents Sellers’ persona. He was a sad character, disappointed in his life and loves. He was not happy with his last wife, Lynne Frederick and he even junked many of his cine films prior to his death as they didn’t seem to match his expectations. The mood of the film is further enhanced by a wonderful soundtrack full of sad saxophones and jazz tones.

There are some that put down documentaries that are full of so-called ‘talking heads’ but personally, if the talking head has something interesting to say, I like to hear them. However, in 2002 the BBC re edited the film by taking the soundtracks from the ‘talking heads’ and combined them with Sellers’ self filmed visuals. The result is now available as a BBC DVD. The original is much better though. 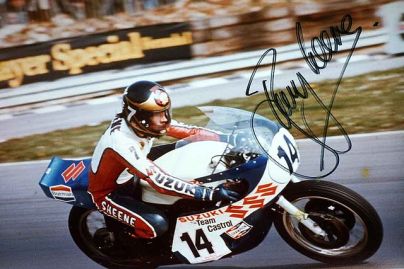 This is a film about the late motorcycle racer Barry Sheene. He was a star of the 1970’s motorcycle racing scene. A long-haired, chain-smoking racer who had Donald Duck on his crash helmet and who famously gave the V sign to one of his opponents, I think it was Kenny Roberts, at a race at Silverstone in 1979. In this film Sheene goes to Daytona and is flat-out testing his bike when the engine locks up. He yanks in the clutch but is still sent hurtling along the track breaking several bones in the process. The film follows him to hospital where he joked with colleagues, even saying to his team manager, ‘the staff really hurt me. I’m glad I didn’t tell them about that pain I’ve got in my shoulder.’ His manager looks confused for a moment and says, ‘well, don’t you think you should tell them?’

Sheene is pinned back together with various metal rods and is later seen hobbling away from the hospital but even so, later in the film, we see him back on his motorbike once again.

The film was produced and directed by Canadian documentary maker Frank Cvitanovich and is a fascinating insight into the world of Barry Sheene. It is clear he lived and breathed motorcycles. In later life he retired and became a sports commentator in Australia. He died of cancer at the age of only 52

Across the Lake was a BBC film made in 1988. It starred Anthony Hopkins as speed king Donald Campbell in the final days of his life as he tried to raise the water speed record to over 300 miles per hour. Hopkins gives a lovely performance as Donald Campbell, a man who believed himself to be living in the shadow of his father, record breaker Sir Malcolm Campbell. He decided to take his old Bluebird boat, update her and try to break the 300 mph mark on Coniston water in the lake district. The jet boat flipped over and Campbell was killed. His body was not found until 2001.

The film shows the unglamorous side to record-breaking. Waiting in poor weather, the endless delays, the mechanical issues, the press waiting for something to happen. Something drove Campbell onwards in his pursuit of records. He was short of money and had sold all sorts of rights to his name, his films of record-breaking and so on. This was all before the days of big time sponsorship in the speed and motor racing industry and Hopkins shows us a Donald Campbell undefeated, perhaps even a little desperate but still with considerable style.

The record-breaking team disperse for Christmas and then return after the holidays. They begin their preparations again until a fine January morning appeared. Campbell powered up his speedboat and did a run of 297 mph but lost his life on his second run.

Having written this post about three old films I watch now and again on my old TV with the built-in VHS cassette player, it was interesting to find, during research, that all three can be seen online.

The original three-part version of The Peter Sellers Story: As he filmed it can be seen on vimeo. Click here to watch it.

Frank Cvitanovich’s Barry Sheene Daytona 1975 documentary is on you tube. Watch it here.

Across the Lake is also on youtube. Watch it here.

Perhaps those old films are not as unseen as I thought!

If you enjoyed this post, why not try my book, Floating In Space, a novel set in Manchester, 1977. Click the links at the top of the page for more information, or the picture below to go straight to my amazon page.