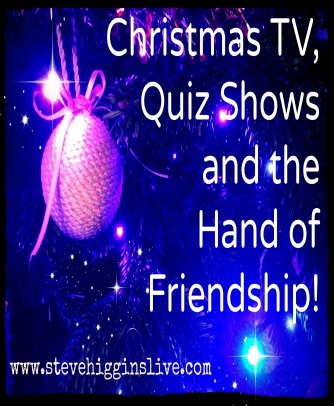 TV this Christmas wasn’t particularly great but I did watch a few things. One film I was looking forward to watching was the Lady in the Van, a mostly true story about a bag lady, in a van, who came to live outside playwright Alan Bennett’s home in London. Bennett takes pity on the lady and lets her move the van into his drive when parking restrictions force her to relocate. He combines her story with that of his relationship with his mother but the odd thing about the film is that Bennett gives himself two personas, one Alan Bennett the writer and the other Alan Bennett who is experiencing all these events. The two even confer together. This did confuse me at first but I eventually worked it out. Not a brilliant film but original.

On Boxing day I contrived to watch two films together, not by recording one and watching the other later as you might think but simply by flicking over between the two channels at an appropriate moment. Uncle Buck is one of those rubbish formulaic American films that I have to describe as not only a load of old tosh but also a rather fun film. Sometimes bad is good, if you know what I mean. Uncle Buck is about an American family who need an emergency babysitter, well, family sitter, for a few days. They find the only option is the unreliable out of work brother played by John Candy. He arrives in his old car pumping out smoke and oil. He charms the younger kids but the teenage daughter is something of a problem. I found myself a little bored part way through so it was time for a quick switch over to watch that classic John Ford western The Searchers. If you have never seen this movie, which I cannot for a moment believe, it’s about settlers in the old west who find their daughter has been taken by Indians after a raid. John Wayne and his part Indian nephew played by Jeffrey Hunter, start tracking the Indians across the west and it is only after many years that they find themselves face to face with Scar, the Indian chief, and their long-lost sister and niece Debbie, played by a young Natalie Wood.

I missed a huge chunk of Uncle Buck because I became too interested in The Searchers but I managed to tune in at the end where Uncle Buck sorts out ‘Bug’ the teenage girl’s cheating boyfriend and in doing so makes friends with the girl. Uncle Buck is a great film to watch when you’re tired and not really paying attention and I always get the feeling it was written by a sort of committee of writers. (Probably the same committee that wrote Home Alone and Three Men and a Baby and so on.) I remember once seeing a documentary about the US sitcom Friends. The show is not one of my favourite programmes but in the documentary they showed how Friends was recorded in front of a live audience. If a bit of business didn’t quite work out, the recording was stopped while a whole bunch of writers and producers had a chat about things. Then a new line or even a section of dialogue was inserted or some of the action was changed. That was then run past the live audience. If it still wasn’t quite right the laughter track was updated to fill in. Writing by committee, interesting. .

Another film I watched was The Secret Life of Walter Mitty starring Ben Stiller as the title character. Mitty was actually a pretty good film. I missed a section in the middle when I turned over to watch a bit of Uncle Buck on plus 1 that I had missed earlier but it was a well-produced film, not hilarious but interesting. I did come away from the film though wondering whether the magazine ‘Life’ had paid to be featured in the film (a prime example of product placement) or whether the movie producers paid Life for the use of the magazine in the film.

Dr Who was relegated to the TV recorder but Liz and I watched our favourite soap Coronation Street on Christmas day. Hey, we’re northern people and Corrie is our representation in the TV world. Whilst on the subject of the north in the media I have to say one of the attractions of Coronation Street is seeing and hearing people talk the way I talk and do the things I do and live in a place I was brought up in. Certain ‘northern’ films like Educating Rita annoy me so much. It’s supposed to be set in Liverpool although the only authentic scouse accent is that of Julie Walters. Her screen husband has some kind of bland accent that’s a cross between a brummie and something else and all around are various southern and northern brogues all mixed together. I suppose the producers or director were from London and assumed that those of us up here in the ‘north’ would all understand it. Actually, that confusion of accents in the film destroys its credibility. I believe it was shot in Ireland so why not make everyone Irish? Surely a better solution to the mish-mash of accents that ruin the film. OK rant over. Back to Christmas.

I had to work on Boxing day but the drive to work was a real pleasure. I leave home at 5am to get to work in time for my shift at six and generally, the M6  is pretty busy at that time.  I find these days that the rush hour starts very early and more and more people are travelling further to their places of work. Boxing Day though was a different story, just me and a few others travelling to work.

On Wednesday I changed to the night shift and spent a few hours during the day with Harry and Theo, Liz’s grandsons. We went out to the park and then had a drive down to the ‘front’ in St Annes. Many holiday towns seem to look a little forlorn out of the holiday season. A prime example is Blackpool, a few miles further up the road. It looks like a tired film set waiting for the actors and cameramen to return and brighten it up again. St Annes though is a lovely, friendly town that looks good to me whatever the season. Along the front we passed the Spitfire aircraft, mounted on a tall plinth looking just like it was taking off over the sand. The other day on a TV quiz show one of the questions concerned the Spitfire which must surely have a prime place in the annals of British history. This icon of the skies was the backbone of the RAF in the dark days of 1940 and the lady on the Chase  or Tipping Point or whatever quiz it was, who had never heard of a Spitfire, was the brunt of a shower of abuse which I directed at her through the medium of my TV screen. Never heard of a Spitfire? What was she even doing on a quiz show?

Despite this being the season of goodwill it is still saddening to see images of the war in Syria on the TV news. I sometimes wonder what would happen if just one soldier would put down his rifle and hold out his hand in friendship. Would it catch on? Imagine ten soldiers, then twenty, then a hundred, then thousands following suit until an unstoppable wave of peace and fellowship begins to spread. Imagine a huge wave of harmony circulating like some oddball YouTube video going viral all around the world shaming all those who want war and strife.

One last thought about that hand of friendship. My old dad was a man who left school at fourteen with not much in the way of education. He worked on farms in the then rural area of Wythenshawe where I was brought up. He was a great reader though and whenever he started a new book he would prepare a cardboard bookmark, fashioned out of a cereal box or whatever came to hand and on it he would write down any word he came across in the book that he didn’t know. Then he would look up that word and write down the definition in his notebook. He added all sorts of things to that book. Words, phrases, lines of poetry, names of famous people and so on. One of the quotations he noted was this: A closed fist is a closed mind. An open hand is an open mind.

All I need now is a quiet day to watch Eight Days a Week, the Beatles movie directed by Ron Howard that Liz gave me for Christmas and a spare week to watch the bumper Doctor Who DVD bundle that I won on e-Bay the other day.

Happy Christmas and all the best for 2017!

Floating In Space is a novel by Steve Higgins set in Manchester, 1977. Click the links at the top of the page for more information.

One response to “Christmas TV, Quiz Shows and the Hand of Friendship”