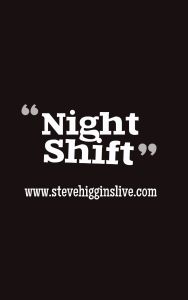 What I think I might do in this post is an old writer’s trick. It involves taking some part written posts and trying to string them all together into a brand new post.
Let’s see if it works out.

The first night shift is, perversely, the easiest one. I say perversely because it should, by rights, be the hardest. To prepare for it I usually have a lie in that morning and prior to getting ready for work I go back to bed for at least an hour, just to get forty winks which, with a little luck, will get me through the night.
It’s a 45 minute drive to work, mostly all motorway driving, and I take a great deal of care in selecting some music to play in my car. My car is heaving with CDs and I’ll choose something interesting, something enjoyable that will last until I drive in through the gates at work.

Last week my first night shift coincided with election night so it was interesting to settle down and watch the results gradually come in. I work in an emergency control room and the wall of our room has various screens where we can highlight CCTV images of the incidents we are dealing with. In the centre is the TV screen currently set to Sky News as for some reason, every other channel comes up blank with the legend ‘no signal available.’
This being an operational control room the TV has no sound and it’s sometimes quite amusing to watch the subtitles appear with the wrong word or sentence. Some of the best I’ve seen include MP Ed Milliband described as the Ed Miller Band and the BBC welcoming viewers to the ‘Chinese new year of the whores!’

Anyway, it was a busy night and when I finally looked up from my desk it was clear that despite being the winner Theresa May was actually the loser, and despite being the loser, Jeremy Corbyn was really a winner, if you see what I mean. Yes, that’s politics for you, despite all the weeks of campaigning the result was essentially a hung parliament until Mrs May decided to do a deal with the DUP and their ten MPs.

Since then I’ve seen the DUP, the small Northern Irish party described as everything but Satan himself. Incredibly, gasp some people, they don’t seem to believe in same-sex marriages, although ten years ago, neither did anyone else! Clearly they haven’t moved with the times or perhaps they just believe in what they believe. After all, we do live in a free society.

This last week I went to my uncle’s funeral and I can’t ever remember going to a funeral that was so, I nearly said happy but that isn’t right, free from tears is probably nearer to the mark. Then again, I often wonder about myself and my own emotions. I’m not a particularly emotional man, in fact, I’m probably rather cold in an emotional sense. My family, reunited for the family funeral, many of whom I had not seen for years are clearly made of similar stuff. Then again, when I spoke to my Mum who is getting rather confused in her old age and did not attend, and told her about the pleasant demeanour of all concerned she thought for a moment and then said ‘don’t worry, the tears come later!’ Clearly, she is not as confused as I had thought.

As a sort of follow up to that, Friday night, Liz and I went to the Number 15 pub in St Annes and a guitar duo were the live band. Sadly I have forgotten their name but they were outstanding. One of the songs they played was a song I have never heard covered before. It was ‘The Ballad of Jack and Diane’ originally sung by John Mellencamp.

‘Oh yeh, life goes on. Even though the thread of livin’ is gone.’

Quite appropriate under the circumstances.

This week I have spent some time in the garden with my latest toy, a chain saw. I was a little scared of it at first but gradually I got used to it and those tree branches that have been immune to my tame sawing and chopping these last few years have now been firmly removed and chopped neatly into fireplace sized logs. I enjoyed myself that much it’s a wonder I didn’t create a swathe of destruction throughout the local area.

I finally managed to take control and now I just need some cold weather so we can have a nice log fire!

The end of my block of night shifts is really the best moment of all. The morning shift manager comes in and we exchange a few pleasantries. I brief them about any ongoing incidents and they in turn go off to brief their team. I thank my people for their work over the past few nights, the new team come in and take over. We sign off and it is time to leave.

Outside in the car park it’s a lovely warm summer’s morning. There is some cloud but also one clear side to the sky and the sun’s rays bear down and warm all they touch.

The local rabbits scamper about as I search for a new CD. I’m looking forward to my sleep later this morning, because the sleep at the end of my last night shift is the nicest sleep of all. I start the engine and drive away and click play on my CD player. Yes, I fancy some Commodores this morning.

Buy the book! Click here to visit Amazon and download Floating in Space to your Kindle or order the paperback version.  Click here to purchase my new poetry anthology showcased below.