Photo by Nathan Anderson on Unsplash

I am back once again in the UK after my five weeks in France. Yes, all things must come to an end and of course, so do holidays. It’s probably only fair to mention that after an inordinately long time spent lying on a French sun lounger, I do have, as you can imagine, a fair old plethora of French thoughts and ramblings in my notebook, all of which I feel duty bound to share with you, my readers.

Please bear with me, after all, in a few weeks time I will be fully reintegrated back into the UK and I’ll be writing the usual stuff about things like old black and white films and old TV programmes newly discovered by strange and sometimes fleeting new freeview TV channels. However, until then:

One of the really satisfying things about staying in a large house in the French countryside, is the lack of interference from the outside world. I mentioned in another post about silence, that simple commodity that is a cornerstone of relaxation but is difficult to find in an urban metropolis like Manchester. Another simple quality here in rural France is the lack of light pollution. In the city things such as street lighting, neon lights and illuminated advertising hoardings all contribute an abundance of light but here in the country, darkness is something different; a deep, sensuous blackness that almost overwhelms the senses.

Lying back on your chair or lounger in the soft, warm evening and looking up at the sky is a wonderful sensation. Without the interference of ambient light, the sky at night is a whole new world. An enigmatic velvet vista opens up to the naked eye with myriads of stars, some the merest pinpricks, others great beacons in the sky. 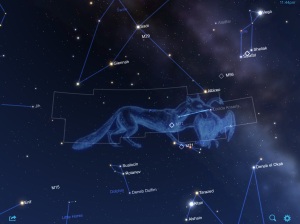 A screenshot from my iPad.

It is really humbling looking up at this great vista and realising that this is what creation looks like and that you too are a tiny part of it. It might even be the case too on that some distant place, millions of light years away, some other person, some distant inhabitant of a distant star is thinking the same thing, looking up at a star that might be our sun, the same sun that warms the earth.

One book that I have particularly enjoyed on this holiday was a book about the thoughts and ideas of Marcus Aurelius, a long dead Roman emperor and philosopher.

This is one of the things he said . .

Another book which I read on holiday was a little disappointing; Lion by Seroo Brierley. The film version was an absolute wonder of documentary style realism and full on emotion. In the book though, Seroo talks about the events that took him away from India to Australia and then years later, reunited him with his lost family in a rather detached and matter of fact way. He hints at a hidden guiding hand in the universe but then denies that he is religious. What was the hidden guiding force then? Electricity?

Strange how something that would make one man turn to religion makes another turn away. Sometimes, religion itself can trigger a negative response. It has always surprised me that someone in the public eye like Cliff Richard for instance, who is a devout Christian and used to make a full on Christian song his Christmas hit has always had his faith used against him. It used to be a regular thing in the 1990’s to slag off Cliff because he was a Christian and yet Madonna, who belongs to a strange sect called Kabbalah, has not had similar treatment. She for some reason, was the acceptable face of the religious pop star.

In a few months time, around Christmas in the UK, yet another town will cancel the Christmas lights because it is offensive to non Christians and rename them ‘holiday lights.’ It’s Christmas, it’s actually a Christian festival for pity’s sake. Still, it will happen and it will be reported in the Daily Mail, I’m sure.

What you probably won’t see reported in the Daily Mail will be that in Afghanistan, Ramadan has been renamed ‘holiday week’ so as not to offend westerners. Perhaps here in the UK we are somehow ashamed of faith, perhaps we don’t need it any more, we are too advanced, too technological, or something. Perhaps technology explains too many things, the origin of the universe, the big bang. Pity it doesn’t explain the reason for living, the actual point of life.

Some years ago I started using some audio tapes by Paul McKenna to build my confidence and help with job interviews. On one of the tapes he mentions that there is no fixed purpose in life except the one you give it. Could he be right?

On one of my last evenings in rural France gazing at the night sky, I found myself thinking of the last sequence in the movie ‘The History of Mr Polly.‘ You must have seen the film on TV, the one with John Mills as Mr Polly. Polly finds himself in a very dull job with a very dull wife and resolves to commit suicide. Anyway, events unfold and instead of committing suicide, Polly accidentally starts a fire which threatens the whole street and he then mounts a brave rescue of an old lady. Instead of dying, Mr Polly becomes a hero and when the insurance money comes in, he leaves his wife, nicely settled with the insurance money, takes a little for himself and departs for pastures new. He sends some money to a post office in another village and gradually meanders in that direction, sleeping in fields and hedges, getting himself a tan. Working occasionally when he wants and sleeping when the mood takes him at other times.

He comes across the Potwell Inn and asks for work and right away finds himself at home.

Right at the very end of the film Polly, played by Mills and the Inn landlady, played by that old British film actress Megs Jenkins are sitting in the garden, contentedly watching the sun go down and Mills wonders aloud ‘what have we done to deserve a sunset like this?’

The fact is, sunsets are a part of nature and they will come and go whether we deserve to see them or not. As long as this world goes round the sun, the sun will rise and the sun will set somewhere on the globe. Even so, sunsets are lovely.

So are the stars and now and again it’s nice to imagine yourself running with them.

Floating in Space can be ordered from amazon as a Kindle download or as a traditional paperback by clicking here. Click the links at the top of the page for more information.