The other day I turned on my DVD player for some serious TV viewing. I had The Third Man lined up and ready to watch. Cheese sandwich primed and alcoholic beverage at the ready. Orson Welles plays a great part in the movie but of course, he isn’t in it that much, which is why I have always thought it strange that the BBC showed the movie in 1985 as a tribute to Welles when he had just died. Citizen Kane would have been a better choice surely?

Anyway, as my DVD player flickered into life I noticed the George Michael documentary ‘Freedom’ was just beginning on live TV. The programme had been continuously hyped by Channel Four for the previous week so, what the heck I thought. Put The Third Man on hold and let’s see what George has to say.

The documentary was narrated and co-directed by George himself and completed just before the singer’s untimely death at the age of only 53.

A lot of the reviews of the film seem to say how honest the film was but it seemed to me to skim over a lot of things in his life. His arrest in a public lavatory in the USA by an undercover police officer was not mentioned. Neither was the incident where he fell out of his chauffeur driven car on the M1. Maybe he just preferred to concentrate on other things in his life. A big focus of the documentary was when he took his record company to court over his recording contract. That was fairly interesting but another event the film brought into focus was when George was the recipient of the best soul album award at the Grammys and a few members of the black music community apparently weren’t too happy. That experience fuelled George’s next album Listen Without Prejudice. The thing is, was Faith really a soul album? Was George a soul singer?

If you ask the question into Google, What is soul music? This is what comes back:

A kind of music incorporating elements of rhythm and blues and gospel music, popularized by American black people. Characterized by an emphasis on vocals and an impassioned improvisatory delivery, it is associated with performers such as Marvin Gaye, Aretha Franklin, James Brown, and Otis Redding.

Another genre crossing track was David Bowies’s Young Americans which reached 28 in the US Billboard Top 100 in 1975 and I’m pretty sure topped the US soul charts too. Bowie himself said of Young Americans that is was “plastic soul, the squashed remains of ethnic music as it survives in the age of Muzak rock, written and sung by a white limey”.

A few years back my favourite radio channel was Jazz FM. My car was constantly tuned to it. I was always down at HMV in Manchester where they had an in store DJ. She was a really nice girl, very approachable and very into her music. She recommended all sorts of albums to me but I was usually in there hunting for some album or artist I had heard on Jazz FM. Then one day I tuned into to Jazz FM, only to find Smooth FM. What had happened to my radio station? Well, it went digital and as I don’t have a digital radio in my car I’m no longer able to listen to it. Still, at least I have my Jazz FM CDs. What’s quite interesting is that looking at them, they feature quite a lot of soul artists. After all, modern jazz is pretty much like soul in a way. Aren’t soul, jazz, and funk all related?

Anyway, getting back to George Michael, his documentary just wasn’t all that brilliant for me. There were a lot of big stars praising George, stars like Stevie Wonder and Elton John. Looking a little out of place was the foul-mouthed Liam Gallagher who despite knowing, presumably, that this was a tribute film about George, he managed to throw in a fair few F words and the occasional C word too. Liam is a big fan of John Lennon and although Lennon wasn’t a saint, the people of Liverpool can be pretty proud of Lennon and his achievements both as a musician and as a peace activist. Speaking as a Mancunian, it’s a pity we cannot say the same about Liam Gallagher. 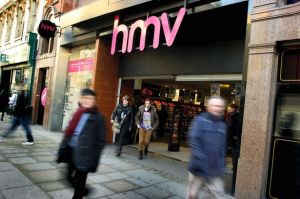 As for HMV Manchester, I remember going in one day to find the in-store DJ had been replaced by a radio version, someone, presumably at head office in London, who broadcast music to all the HMV stores. Later, in 2013,  the  store closed down completely after more than twenty years on the same site. Browsing records and videos in HMV and then popping into my favourite book stores before settling down in some back street pub for a drink, ah, those were the days. I probably bought my Third Man DVD there, or was it Ebay? Certainly, the buying power of the Internet may well have played a part in HMV’s demise.

Anyway, for me, Saturday afternoons will never be the same again.

George Michael did make some good music and he was a good singer but I wouldn’t put him up there in the pop legends’ category. I don’t think I have a single one of his records in my collection but I do like this track he recorded with Mary J Blige. Great video too . .

If you enjoyed this post, why not try my book Floating in Space? Click the links at the top of the page or watch the video below for more information!

2 responses to “The Third Man, George Michael, and HMV”