The world of digital photography is so easy and convenient. Point your camera and shoot. Upload to social media or your cloud storage and there it is. If your picture isn’t quite right you can lighten or darken it, straighten it, crop it, even delete it if you want and start again.

Things weren’t so easy in the film age. I used to be a pretty enthusiastic amateur photographer and I used to like taking pictures of, well anything really. I’ve tried my hand at portraits, still life and pretty much everything.

When I was a schoolboy my parents got me an Instamatic 126 camera for Christmas. Bit of a mistake on their part as they had to shell out for film and developing too, which must have been painful for them when they saw my first efforts at photography, and probably more so when the fruits of my ‘experimental’ pictures came back from the chemist.

In the 1980’s I had an Olympus OM10 then moved up to an OM2SP. The SP stood for spot programming where instead of accepting the average reading the camera’s light meter gave you, you could choose a particular spot in the image and take your light settings from that. Very useful in a picture with light and dark elements for instance.

I also used to have quite a few long lenses which I used at race circuits, particularly Oulton Park where I spent many a weekend watching and photographing racing cars. I must have looked really professional clicking on my wide-angle lens in the paddock and then switching to my 200mm long lens back on the circuit.

The big difference with photography today is that back then in the film era, you took your shot and then sent the film for developing and and printing and sometimes the results were good, but then sometimes they weren’t. To the developer though there was no difference between a bad shot and a brilliant one, they both cost the same!

Today you can shoot as many pictures as your memory card will hold, free of charge, no developing charges and as for printing, why bother? Just upload to your favourite social media page. If you take a bad picture you can edit it with imaging software. If the picture is too bad, delete it and shoot more. In fact the best way to take a great picture today is to take multiple exposures just like a professional, shoot a shed load of pictures and just delete the bad ones!

Four of my Favourite Pictures.

It’s hard to choose favourite pictures because I have so many of them, anyway, here are four chosen pretty much at random.

I took this picture years ago with our old dog Bob with my Kodak Instamatic. We had such a lot of fun with that dog as children, me and my brother. He went everywhere with us. We took him on coach trips where he was always sick and my brother, my dad and I would deny ownership of him, all looking fixedly through the windows whilst my Mum apologised to everyone and cleaned up the mess.

Here’s a picture taken with my Olympus at the German Grand Prix at Hockenheim in 1988. Senna was one of the great drivers of the day. Today he is revered as a legend of the sport but I think it’s fair to say that back in the day he really wasn’t that popular. I remember him being soundly booed at Silverstone in 1989 or 1990 but his talent was unquestionable.

The Greek island of Kalymnos

This is one of my favourite pictures and I did have it blown up and framed once but I must have lost it during various house moves. It was taken on holiday on the Greek Island of Kalymnos. I remember flying to some other island and having to take a ferry over to Kalymnos. The ferry though had to wait 2 hours for a delayed flight from London (those bloody southerners) and when we reached the island it was dark. Our apartment was up the side of a steep hill, right at the top and the rep told me lights would come on by a sensor when we got to the steps. After jumping up and down wildly for 10 minutes the lights did come on and I asked the rep to wait till we got to the top and found the keys. He assured me the keys were there but then drove off. Just at that moment the lights went out and stranded us in a deep velvety blackness. More jumping about and waving and the lights came on so we climbed the steps and finally bumbled into our apartment. Inside I opened the door to the patio and in the darkness of the all-enveloping night, I could sense something over the way. It was not until we awoke in the morning that we were finally able to take in the magnificent view. 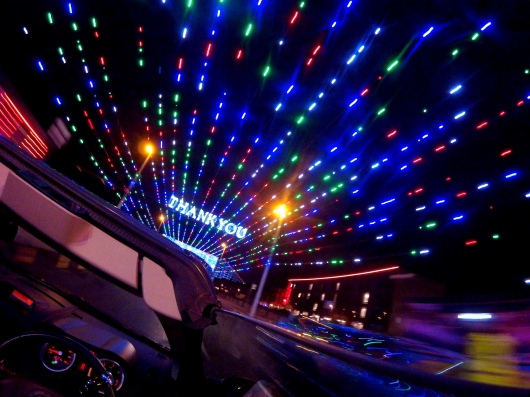 This last picture was taken in Blackpool during a drive through of the Blackpool Illuminations. It’s a lovely colourful snap which captures the atmosphere of the lights. I took the picture with my GoPro camera but I have a confession to make. I was trying making a video of the lights and when I set up the camera I didn’t have my reading glasses with me and couldn’t quite make out the tiny menu and accidentally set the camera up to take stills instead of video. The resulting pictures were actually a surprise!

Floating in Space is a novel set in Manchester 1977. Click the links at the top of the page to buy or for more information.

3 responses to “Every Picture Tells a Story”