TE Lawrence’s home was a small cottage called Clouds Hill. I read somewhere recently that the house had now been refurbished and open to the public. It is a small place and I remember seeing a TV documentary about Lawrence where someone who visited in the past advised that guests were generally left to their own devices, that food was eaten from tins left in the cupboard and that a lot of classical music was played.

Lawrence of course was more popularly known as Lawrence of Arabia, the man who organised the Arab revolt during the First World War. As the feature film by David Lean tells us, Lawrence was dismayed by having to lie to the Arab people, telling them that Great Britain would honour their claims for freedom at the end of the conflict when in fact the UK had every intention of holding on firmly to the Arab lands.

Churchill was impressed by Lawrence and invited him to attend the Paris peace talks.

Lawrence later wrote his classic book, Seven Pillars of Wisdom upon which the film Lawrence of Arabia was based.

A number of elements of the book have interested scholars ever since. The book is a work of history but also a great work of literature and readers have wondered ever since about whether the work was accurate, especially as in one infamous chapter, Lawrence relates how he was captured and beaten by a sadistic Turkish officer.

In that same TV documentary, Lawrence’s brother addresses the camera and sheepishly tells the viewer that not many people can understand how someone can enjoy pain. That was in response to a 1960’s newspaper report about a man who claimed Lawrence paid him to be beaten regularly. Clearly Lawrence was a complicated man. In later life he hid from the public by using the names John Ross and later T E Shaw. He was fatally injured in 1935 after a motorcycle accident.

After a little research I find that the property is now owned by the national trust and is open regularly for visitors. Find out more at https://www.nationaltrust.org.uk/clouds-hill

Nothing that I can add to the mountains of books and articles written about Winston Churchill can make much of a difference, but anyway, here we go. Can there ever have been someone who was not only a great politician but also a great writer and also one of the giants of history? I have always felt a tiny spark of excitement when even now I read Churchill’s words on when he attained the premiership in the dark early days of World War II. ‘I felt,’ he wrote ‘as if I was walking with destiny.’

The amazing thing is that only a few years previously Churchill was a has been, a man written off as a former chancellor who had crossed the floor of the house once too often and now was distrusted by everyone.

As it happened, his dire warnings about Nazi Germany and the impending war made him the obvious choice to succeed Neville Chamberlain, whose policies of appeasement had perhaps led Britain towards the path of war.

Churchill’s home, Chartwell had been bought largely from the proceeds of his books. Indeed he was fond of commenting ‘all this, came from my pen.’

During the time of his so called wilderness years he spent a lot of time at Chartwell and even built some of the walls there with his own hands. He painted there and prior to World War II many informants came to him to reveal information with which he used to call attention to the tragic state of unreadiness of the UK for war.

This is also a national trust property. You can find more about visiting Chartwell here: https://www.nationaltrust.org.uk/chartwell

It’s a long time since I visited Dylan Thomas’ house in Wales. The house is in the village of Laugharne and is not far from one of his famous watering holes, the Brown’s Hotel which I’m pretty sure was bought by one of the comedians from TV’s Men Behaving Badly.

The boathouse was bought by a trust some years ago which saved the property from collapsing into the sea. It’s a lovely place and on the day I visited, we had to leave early although I can’t remember why. I came back the next day and the staff remembered I had left early previously and let me in for free. I wandered about Dylan’s old house and sucked in the atmosphere before buying various books and pamphlets about Dylan and his works.

In another old TV documentary I tend to watch now and again, the presenter, a poet himself, thought he could imagine the conversations of Dylan and his wife, the chit chatting, the arguing and the making up later, or so he supposed.

I took a primitive digital camera with me and took a few shots of the house and Dylan’s famous writing shed. I read somewhere recently that the shed has now been removed and taken to a museum with a duplicate shed now occupying the site.

I enjoyed my visit and Dylan’s own poem always makes me think of it:

In the mustardseed sun,
By full tilt river and switchback sea
Where the cormorants scud,
In his house on stilts high among beaks
And palavers of birds . . .

Click the following link for more information on the boathouse: https://www.dylanthomasboathouse.com/

Lennon is a different kind of writer of course. He did publish a couple of books of his doodlings, one was called In his own Write if I remember correctly but mostly his creative urge went towards his music. Early on, he and fellow Beatle Paul McCartney agreed that all their songs would be known as Lennon and McCartney songs, even though some were written totally by Lennon and some totally by McCartney. Sometimes McCartney would finish off Lennon’s song, other times Lennon would sort out a problem song McCartney couldn’t finish. It was a great collaboration, perhaps the greatest in pop history. 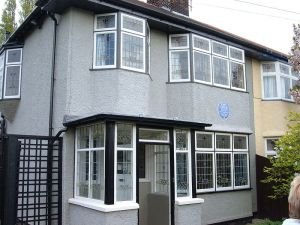 All the Beatles were from Liverpool of course. Lennon was brought up by his aunt Mimi in the Liverpool suburb of Woolton.

Many years ago I used to have a cigarette vending machine round and one of my sales areas was Woolton. One of the pubs I used to service there was a small modest place, owned by two former Shell tanker drivers. They had retired and pooled their retirement money to buy this small pub. They made little money they told me, in fact neither of them ran the pub, they employed a manager to do so.

One was a quiet chap, the other a pretty talkative fellow. The manageress never spoke to me much but the talkative owner was always in the bar and he usually made me a cup of tea and we would have a bit of a natter and then I would be off on my way to service some other pub.

One day we started talking about Lennon and my friend mentioned that Lennon had lived just around the corner from that very pub. Later I followed the directions given to me and found myself parked outside a typical 1950’s looking suburban semi-detached house. Surely Lennon came from a deprived background, a rough and tumble council estate? But no, there was a blue plaque on the wall denoting Lennon had indeed lived here. It was somehow not what I was expecting.

Since I last visited here I see that the house is now owned or at least managed by the national trust along with Paul McCartney’s former home. Click this link for more information: https://www.nationaltrust.org.uk/beatles-childhood-homes

Floating in Space is a novel by Steve Higgins. Click the links at the top of the page to buy or for more information.