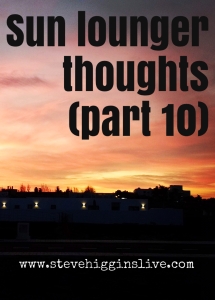 Liz and I have chosen to escape the British winter for a short while and decamp to the Canary Islands, actually Lanzarote, for three weeks. Of course, to get here involved flying and flying can be a stressful mode of transport. This time, even the journey from home to Manchester Airport was equally as bad. Our taxi arrived on time and the driver seemed to be a friendly sort of fellow but then as we got under way I sort of half noticed, and I should interject here that I had set my alarm for 6 am that morning and had started to nod off in the taxi, that the driver had elected to take the M61 and M60 motorway route rather than my preferred M6 and M56 route.

The M61 is a nightmare of a motorway and there is no way I would have elected to go that way. When I told the driver that he replied that according to Google maps my preferred route was ten minutes longer. The M61 comes down from the north Lancashire area into the M60 ring road and is forever at a gridlock from about 7 on a weekday morning. We arrived at the airport 30 minutes late but went quickly through our luggage check in and passport control and soon we were at our gate ready to board our flight.

It never ceases to amaze me that some people who have never flown in an aircraft, like my elderly mother for instance, might look at a TV show or film and think, wow, what a lovely way to travel.

The other day I was watching the movie Die Hard 2. In case you have never seen it, Bruce Willis is at the airport ready to pick up his wife and comes across a terrorist take over of the terminal. Despite his best efforts the terrorists get the upper hand and all flights are stacked up waiting for the villains’ terrorist leader to arrive. Cut to Bruce’s wife up there in her aircraft and from where I was sitting on my Jet2.com flight from Manchester, it looked pretty luxurious. Big wide aisles, big comfy seats with lots of leg room and telephones available for calls to friends and family.

Cut to Manchester and the Jet2 Boeing 757. Liz and I always elect to sit near to the front of the aircraft but the problem there is that as a committed writer I always take my laptop with me. I bring it as cabin luggage and stow it in the overhead compartment and sometimes, unless we are among the first to enter the aircraft, it sometimes happens that I cannot fit my laptop in. On this occasion it just so happened that luckily I did fit it in. Liz and I though were not sitting together, she was in row 7 and I was in row 4. I settled down, sorted my luggage, slipped my jacket up there into the overhead seats and then she asked me to swap. Ok, no problem so we swapped over. This did have repercussions later when we exited the plane because my jacket was down there in row 4 and I couldn’t reach it as I was in row 7. As it happened, just as the passengers began to surge out of the plane I managed to catch the eye of a friendly fellow passenger who grabbed the coat and tossed it back to me.

Unlike the aircraft in Die Hard 2, this one had an extra 20 passengers crammed in which limited the available legroom from spacious to minimal. The trip wasn’t too bad though I suppose. A glass of red wine with my cheese and ham toastie went down rather well although I did find that I couldn’t quite give ‘Our Man in Havana’, the novel I have taken to read on the flight, real justice.

On arrival in Lanzarote, our ‘transfer’ man arrived, a man in a small minibus, ready and willing to drop us at our villa. He took us the safe route, bypassing the mountains and 40 minutes later we arrived at Playa Blanca. ‘Where is your villa?’ he asked, surprisingly as we had already provided him with the address. ‘Turn left here’ we called. ‘No, that is not Marina Rubicon.’

We know that we told him, but the villa is called Villa Marina Rubicon even though not actually situated in the Marina! Finally, he deferred to our directions, telling us this was the wrong way. Liz however, is a world expert on Google maps and as far as I was concerned, if she said this is the way, this way was the way!

Arriving at the villa we could not gain entry, the code for the keysafe would not free up the keys and the driver was getting a little anxious, unusual for the laid back Canarians. ‘I have another pick up to go to’ he complained. ‘I must get going.’ Just then I noticed a second gate to the property with another keysafe and the passcode worked there and freed up the keys. The driver was all for driving off then but I stopped him in time to get our suitcases and bags but sadly, not quick enough to get Liz’s coccyx cushion, which she needs in order to sit down pain free.

Numerous calls ensued to the company that arranged the transfer but it seemed that that company had contracted out the work to another bus company. We contacted the company and they said we would have to get to the airport bus station where there was a lost property office. ‘Whoa, how could we get back to the airport’ we asked? Well, that was clearly not their problem so we hired a car, went back to the airport, which luckily was not Manchester and while I waited on yellow lines in the hire car, Liz went to the bus station to try and find the cushion. It was not to be found. Further heated phone calls ensued and it transpired that we should have gone not to the bus station lost property office but to the lost property office of the bus company. The next day, armed only with the information that the bus company was situated at the airport next to a petrol station, we found the bus office and successfully retrieved the cushion.

Well, that was a result but what was really difficult for me was driving a left-hand drive car. In my own car and our motorhome, I have driven thousands of miles in Europe but driving a left-hand drive car, well that was a challenge. At first, every time I went to change gear, I put out my left hand and went whack into the door with my left hand. The gear change of course is on the right and it is important in a left-hand drive vehicle to change gear with the right hand. Two days later I had finally mastered the technique, but then it was time to hand the car back. I’m just trying to envisage what problems I’ll be having back home in a ‘proper’ right hand drive car! 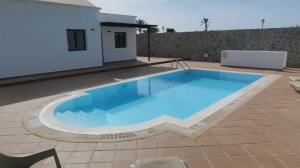 Here in Lanzarote the temperature is that of an English summer although it does cool down in the evening . Take a look at this picture of our villa. Looks pretty good doesn’t it? You can see the owners have made everything low maintenance, hence the lack of any plant life or garden area. Pool looks good though doesn’t it? Looks good but it’s not heated and there is no cover so I can assure you that despite that inviting photo it is absolutely freezing. After a few hours of sunning myself in the fabulous sunshine I thought: time to cool down! It took me a while to actually get into the pool, stepping gingerly in one step at a time but I finally did it. You might be thinking well, bet it was okay once you got in. Wrong! It was cold and just got colder, in fact I felt a bit like those crazy people who jump into the sea en masse on New Year’s Day. Glad it was warm and sunny when I got out but it took a while to get my body back to normal operating temperature I can tell you!

One final observation about our rented villa. Liz and I have rented a lot of places in our time, some small, some large, some expensive and some very expensive. Some come with a welcome pack for the new visitors, I remember once in Portugal staying at a huge villa which we had rented off-season and with a nice discount, finding a lovely welcome pack consisting of wine, bread and orange juice. In some places, in the cupboards you might some a leftover packet of pasta or cereal or something. Our present place came with nothing, not even salt and pepper or a kitchen cloth, all of which we had to buy.

I noticed too there was no visitors comments book either, very convenient indeed for the owners.

Floating in Space is a novel by Steve Higgins set in Manchester, 1977. Click here to buy or check out the links at the top of the page for more information.