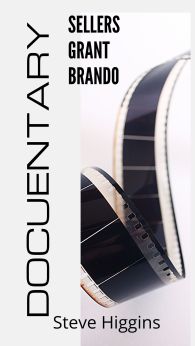 Not long ago I came across a blog post about the best documentary films of all time and looking through it I noticed one about Marlon Brando. When I was younger I was very interested in Brando. I thought he was a great actor, one of the greatest in fact even though I think his stature has become diminished by his poor choice of roles in his later life.

Brando’s earlier films are a list of classic cinema greats and if he had perhaps died early like James Dean I’m sure many writers and cinema fans would have wondered what would have happened if Brando had lived, what great movies would he have made? Actually the answer is, not very many.

Anyway, before I get to Brando let’s look at some other examples of movie actor documentaries.

Peter Sellers as he filmed it.

The BBC Arena team made this film about Peter Sellers in 1995. It was created largely from cine film shot by Sellers himself, who was a lifelong camera enthusiast. The original documentary was made in 1995 and if I remember correctly, Sellers’ widow, Lynne Frederick had died and left behind a lot of Sellers’ effects, including his home movies which is how the film came to be made.

Normally, I’d say that you have to be interested in movie people and how movies are made to like this documentary but this film is so special I don’t think that rule applies.

The original film was in three parts and began with Sellers’ early days and his early films. The first cine films we see are black and white movies and as Sellers’ career takes off, his cine equipment also improves and he upgrades to colour and then on to sound. His own images show his young self as a sort of ‘spiv’, a Flash Harry sort of character with his double-breasted and shoulder padded jackets. An uneasy relationship with his mother emerges, as does a rather spoilt and volatile personality. His first wife talks about their early days and their life together and friends like Spike Milligan talk happily about successes like the Goon show and their beginnings in show business. Milligan had a 8mm camera and Sellars a 16mm one. Of course ‘Peter was richer,’ comments Milligan. ‘Richer by 8 millimetres!’

Sellers’ cine film is blended with interviews from various people who played a part in Sellers’ life. 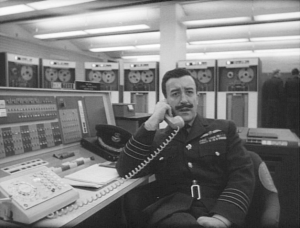 A fascinating section concerned Casino Royale, the spoof James Bond film. Various directors were involved but Joe McGrath shot one segment with Peter Sellers and Orson Welles. McGrath was a TV director relishing the move into feature films, that is until Sellers told him he didn’t want to be in the same shot as co-star  Welles. A heated debate ensued which became physical. Sellers said he was going off to calm down. He never returned and if you ever see the completed movie, you’ll understand why Sellers’ character abruptly disappears too!

Sellers claimed to have no personality of his own and ‘borrowed’ them from the characters he impersonated. It’s interesting to watch the TV interviews included in the film where Sellers seems to mimic the Yorkshire tones of Michael Parkinson and again, in other snippets he is taking on the accents and style of his interviewers.

The film overall has a sort of melancholy feeling which I feel accurately represents Sellers’ persona. He was a sad character, disappointed in his life and loves. He was not happy with his last wife, Lynne Frederick and he even junked many of his cine films prior to his death as they didn’t seem to match his expectations. The mood of the film is further enhanced by a wonderful soundtrack full of sad saxophones and jazz tones.

There are some that put down documentaries that are full of so-called ‘talking heads’ but personally, if the talking head has something interesting to say, I like to hear them. However, in 2002 the BBC re edited the film by taking the soundtracks from the ‘talking heads’ and combined them with Sellers’ self filmed visuals. The result is now available as a BBC DVD. The original is much better though, in fact you can see all three parts on the video sharing site Vimeo:

Grant was the smooth talking and sophisticated star of many a Hitchcock film, indeed the documentary revealed ‘Hitch’ to be his favourite director. Grant and Hitchcock were both immigrants from the UK.

Cary Grant was born Archibald Leach in Bristol in the southwest of England. He had a rather sad childhood during which his mother disappeared. Various explanations were put to the young Archie including the lies that she had gone on holiday and later that she had died. In fact his father had his wife committed to an asylum where she languished until her rich and famous son returned to her much later. In fact, Grant did not learn that his mother was still alive until he was thirty-one years old.

Archie’s father remarried but Archie was not included in the new family. Instead he was sent to live with his grandparents. At school he developed a love of theatre and spent much time helping and later working at small theatres in Bristol. When he was only 11 he began working with a small troupe known as the Pender Troupe and when they went to undertake a new tour in the USA, the young Archie went with them, following in the footsteps of other performers like Charlie Chaplin and Stan Laurel.

In the USA, Archie toured the vaudeville circuit with the Pender Troupe and decided to stay on in the USA when the troupe returned home. He and some others formed their own troupe and Archie spent a lot of time doing various acts like stilt walking and unicycle riding. Gradually he moved on to better roles in various theatre productions and even had a screen test in the early 1930s, which was shown on the documentary. Archie, now using the name Cary Grant comes over as a loud-voiced individual, making many faces for the camera. Of course, as a vaudeville actor he was used to talking loudly and making exaggerated expressions but he soon learned to tone down his performance for the cameras.

The documentary uses text from Grant’s unpublished autobiography and it is clear an experience in later life had a great effect on him. Grant took part in a form of psychoanalysis using LSD which enabled him to confront issues from his early life which the actor felt had unduly affected his relationships as an adult, particularly with women, in fact he was married five times.

The film was interesting but focused mainly on the unpublished autobiography and many of his friendships and relationships that I have read about in other books were not even mentioned. A great part of the film also was Grant’s collection of home movies which were used throughout the film although many times what we were seeing was not properly explained. Towards the end of the film Grant’s daughter was interviewed and visits Cary’s old home. In one scene we see her visiting the patio shown in a earlier shot on one of Cary’s home movies. More interviews and perhaps some more location footage would have benefited this film enormously. Still, it was interesting and can be found on the BBC i-Player if you missed the original broadcast.

Listen to Me Marlon

After reading about this Brando documentary I did a quick search on eBay, found a very cheap copy for a couple of pounds including free delivery, and sat down to enjoy it. It is different to the two films above because rather than home movie or the  written word, the prime source of the film is audio tapes that Marlon recorded for himself. The big problem there is that while many are good recordings, others are not only poor quality, but Marlon’s non acting speaking voice is rather difficult to understand. He has a strange lisping, mumbling voice completely unlike the strong voice of many of his roles.

On top of that a droning piano accompanies much of Marlon’s recordings and many times I found myself rewinding to find out what he had actually said.

The Brando that emerges from this film is a sad man made sad perhaps by memories of a drunken mother and a violent father. In an early sequence Marlon senior joins his son the film actor on a TV show and the voice on one of Marlon’s tapes tell us how both of them were acting, one playing the loving son, the other playing the caring father. Marlon spent a lifetime looking to psychoanalysis for help, feeling inadequate despite his fame and success as an actor. It seems also that he despised his craft even though it gave him financial security to do and live however he wished.

Acting he reveals was the first time he did anything that he was praised for and the first to see his talent was Stella Adler, an actress who trained and nurtured him as an actor.

Brando appeared in a number of classic films including A Streetcar named Desire, Viva Zapata, and the Oscar winning On The Waterfront. Some of his later choices of film roles were just frankly disappointing especially during the 1960s. By the end of that decade he was persona non grata in Hollywood and when Francis Ford Coppola decided he wanted Brando to play Don Corleone in The Godfather, alarm bells were ringing in the executive offices at Paramount. Not only was Brando held in low esteem as an actor he also had a reputation as a troublemaker who caused delays and added more dollars to production schedules and costs.

I’m not sure Brando ever really appreciated what Coppola did for him. As well as giving him an Oscar winning role Coppola rehabilitated Brando in the film industry and made him a bankable star once again. Later, when Brando appeared in Apocalypse Now, he appeared on set massively overweight forcing Coppola to shoot him in darkness and shadows. Brando complained about the script too and began rewriting his own dialogue. On his personal audio tapes Marlon rants on about his treatment by the director but really, it was Francis Coppola who should have been complaining.

Listen to me Marlon was fascinating but ultimately a disappointing film. If I ever do a blog post about the best documentaries ever I’m sorry to say I won’t be including this one.