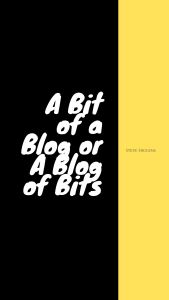 half finished posts and stitch them into one. Maybe it’s worked, maybe not. Here we go . . .

All of Me an autobiography by Barbara Windsor

Barbara is probably best known as the blonde from the Carry On films. It’s a niche that’s she stuck in despite her appearances in later years in the TV soap Eastenders. Maybe she likes that, maybe not but either way, she’s rather good at what she does. In this book, she tells her life story and it’s very frank and pretty entertaining.

‘Bar’ as her friends call her, doesn’t hold back and basically tells it like it is. She talks about her climb to fame and the husbands she has had along the way. First was Ronnie Knight, an East End gangster and friend of the Kray twins. Ronnie and Bar seemed pretty good together for a while but neither of them were interested in each other’s careers. Barbara would be off filming and Ronnie it seemed wasn’t bothered at all about that. He would be off to sort his nightclub out and Bar would be happy at home having to get up early for a film or rehearsing for one of her many stage roles. On one occasion in the early morning, the police burst in and carted Ronnie off to the nick for armed robbery. Barbara stuck by her man then but soon after, she’d had enough. 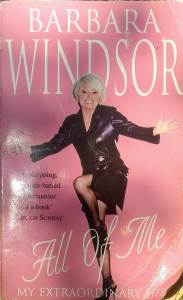 After Ronnie got the push, he was ‘aving it off’ with a blonde down at his club; Bar moved on to a younger guy and when that didn’t work out she moved onto an even younger guy. That younger guy, Scott, is still with her today and was in the news recently as Barbara has sadly been stricken with dementia and may have to go into residential care.

One surprising aspect of the book is that although like fellow Carry On star Kenneth Williams, I’d always thought of Barbara as a film and TV star, in fact a great deal of her career involved the stage and she appeared in many stage productions including her own one woman show.

This book, written in 2000 is a great little read and well worth picking up if you see it in the book shop. It’s written in a friendly talkative chit chat style, almost as if Bar has dictated it to someone and that’s something I particularly like about the book. The last quarter of the book though feels a little as if it has been tagged onto the end of another book. It mainly concerns her relationship with final husband Scott and is perhaps a little gushing and overly romantic and Woman’s Weekly style but I reckon Bar deserved a little romance in the twilight of her days. Nice read and a book well worth picking up.

Searching through my old VHS videos the other day, I came across Chaplin, a film about the great silent comedian, directed by Richard Attenborough. I can’t say I’m a great fan of Attenborough as a director and this film showing us the life and times of Charlie Chaplin is lacking in many ways, but having said that it’s a pretty good film in many other ways.

I’ve often thought that if I could go back in time to any era, I’d go back to Hollywood in the 1920’s, the time of silent films. Someone, and I forget who it was, discovered that Hollywood had the perfect climate for making movies. Great weather, plenty of sun, all the requisites for making silent movies. Films back then were shot either outdoors or with basic sets without a roof, all lit by the relentless Californian sun. You didn’t need a degree to be a director in those days, just confidence and the ability to put a film together, not only in your head but to transfer it to film.

I don’t think Charlie Chaplin was really that funny, certainly not as funny as Laurel and Hardy for instance but he was the first film comedian to do more than link a series of funny images or sketches together. He added a little pathos, made the viewer feel for the character, care about the character as well as laugh at him.

Chaplin is loosely based on Charlie’s own autobiography, with a fictional editor played by Anthony Hopkins trying to add in all the bits that Chaplin didn’t want to write about, his various young wives for instance. Robert Downey Junior plays Chaplin and Geraldine Chaplin, Charlie’s real ife daughter, plays Chaplin’s mother who sadly descended into madness. Chaplin brought her to America and looked after her although he visited her infrequently.

The great loves of his life were his mother, his brother Sydney and his great friend Douglas Fairbanks. Sadly, Chaplin emerges  from his autobiography and from this film as essentially a sad fellow, someone in a way unfulfilled, although his films indeed changed the course of cinema history. In his time he was probably the most famous person in the world, his silent films were unrestricted by the restraints of language and his fame covered the entire globe, anywhere in fact that had a projector and a screen.

There are some great performances in this film, Kevin Kline is good as Douglas Fairbanks as is Dan Ackroyd playing the part of producer Mack Sennet. Robert Downey isn’t so bad either in the title role. I read somewhere that the film was a disaster at the box office. Pity. Personally I really enjoyed it.

I was saving this for an ongoing blog post about annoying elements of the 21st Century which I update every now and then but instead here it is now. Having been cooped up at home for over 12 weeks I called into work ready to get back to my desk but apparently the Human Resources Department (years ago we used to call them ‘personnel’) decided I couldnt go back until August 1st. As a lot of the lockdown has eased we decided to have a trip out in the motorhome.

We found a nice spot to stop and set up our little camp, part of which involved a ground sheet. Now a ground sheet is something used by campers to lay down on the ground. It came in a smart plastic case and we unfolded it, spread it out and spent a considerable amount of time in the sun on it, lying around, reading, sunbathing and so on.

Later on when we packed up, I folded the ground sheet up but somehow it must have grown or stretched because no matter how I folded it, and I did do it according the still visible folds on the sheet itself, no way would it ever go back in that case. A similar thing happened the other week when I bought a hair cutting kit. It came in a box, the electric hair cutters, various length combs, a plug and so on. After I had performed my post lockdown personal haircut would that lot fit back in the box? Of course not! I’m sure one of the main design factors in these items is to make the box so small that the items will only ever fit in once and even then only in a certain way.

Of course I could put the hair cutters in the plastic bag from the groundsheet and then just tie up the ground sheet with an old belt. Result!