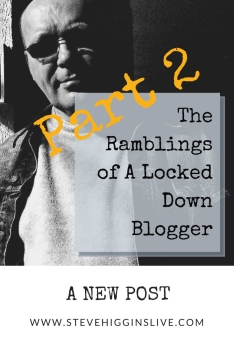 It finally happened last week. It had been rumoured and expected. It had been predicted many months ago and so here it is. I’m talking of course about the second wave of the Coronavirus epidemic and the resulting second lockdown. There was some advance notice and as a result Liz and I were able to book a table and enjoy a last meal out. We even thought what the heck and went for a second bottle of wine just like the other couple in the next table sitting a socially distanced two metres to our left.

So that’s a month coming up with no nights out at the pub, no meals out and no quiz nights. The big problem with this second lockdown is the weather. In the first one I was quite happy sitting out in the sunshine reading a book. Now we have entered November here in the north of England it seems as though it has been constantly raining. What can we find of interest then? Well the big interest for me just lately is the American election. Like many people, I thought the election was a foregone conclusion, that Trump would be out and whoever the democrats chose would be in. It just so happened that the democratic candidate was Joe Biden. Joe is getting on a little bit for the top job and wouldn’t necessarily have been my choice but then again, neither would Donald Trump. As I write this the election is still ongoing, they are still counting the votes in a few remaining states. Both candidates are claiming victory and one is claiming huge voter fraud. Biden has so far been pretty much acclaimed as the winner, having received congratulations from previous presidents Obama and George W Bush. No congratulations have been forthcoming from Donald Trump and his legal team has already initiated legal action. I’m not sure who exactly they are planning to take to court but either way, that has not stopped Joe Biden getting his transition team together and making plans for when he takes office.

I wrote something back in 2016 about the smooth transition of power in the great democracies and even wondered what would happen if ever the outgoing president refused to budge. That was just wild blogging speculation but now some commentators are saying it could actually happen. This is almost as interesting for me as Watergate.

There was a time when I thought I understood the US election, now I’m not so sure. Hillary Clinton and Al Gore both won the popular vote in previous elections but failed to get enough electoral college votes to take them to the White House. I’m even confused about the primaries, I mean I was convinced Bernie Sanders would be the democratic candidate, but he stepped down earlier in the year and then Biden seemed to become the candidate virtually unchallenged and his projected walkover victory over Trump has just not happened. Many people actually support Trump. Some give their support because they are dyed in the wool Republicans, some presumably admire him but either way, 48% of the votes were for him.

I was watching TV the other day and a female black voter was being interviewed and surprisingly, she was voting for Trump. She wouldn’t vote for Biden she said because he was a socialist, which in the USA is one step from being a communist. Maybe that explains why Trump has such a following; in many places he must be seen as the anti-socialist. Trump did well in Florida where many Cubans found home after leaving communist Cuba.

When Nixon won the election in 1968 he spotted a supporter in a crowd with a banner proclaiming Bring us together and made that a campaign slogan. Bringing Americans together is a big ask for whoever wins in 2020 but I wish him luck in doing just that.

Theoretically this should be a great time for writers. What could be a better time to write than the lockdown, after all there isn’t much else to do. A few months back I shelled out a hundred or so dollars to list my screenplay on a web site called InkTip. InkTip is a way of bringing producers and writers together. They produce a newsletter for producers listing scripts and also provide subscribers with weekly lists of producers who want scripts. My screenplay has seen a lot of action lately with various producers reading either the synopsis or the script itself but that million-dollar deal has yet to surface. I live in hope.

My screenplay was one I wrote quite a few years back and I read through it recently and had an idea for a new ending. I added the new ending, tidied everything up and that final version was the one I added to InkTip. As I reviewed it again the other day – I don’t know about you but I’m always reviewing my old stuff- I realised that it was written before today’s mobile phone, Twitter and Instagram age. Not one of the characters has a phone. I might have to spend the lockdown adding mobile phones to my screenplay and bringing it into the 21st century.

Another project I’ve been working on during the lockdown is a video covering my recent trip to the Scottish Highlands. It’s mostly GoPro video from a camera stuck to my motorhome window. I’ve added some stills and some bits where I talk straight to the camera. I had a lot of technical problems putting it together, particularly recording the voice over. The voice over is pretty important because the actual visual stuff isn’t that exciting. When I recorded it, my laptop clearly couldn’t keep up with playing video and recording sound at the same time, so I had to record my voice separately and then add it to the video. That makes it difficult because normally as I’m reading the narration I tend to react to what is on screen so I can slow down or speed up if required or just add lib if I need to.

I was feeling pretty pleased with myself when I finished it and quickly got it uploaded to YouTube. I added the video to a video creators page that I follow and got some pretty reasonable feedback. What was really annoying was when I decided to tinker with it and spotted a couple of things I hadn’t noticed. One was in the credits at the end where I credited the music as Soul Grove instead of Soul Groove. Oh, and there was one more. In one of the stills of the motorhome I hadn’t picked up that Liz was rather cheekily giving me the V sign through the window! The thing is, the video had already garnered 72 views so do I delete and add the updated version or just leave things as they are? Decisions, decisions.

I’ve has a couple of nights on my own this week, as usual keeping my mothers house ship shape and lived in. One night I thought I’d make one of my favourite dishes, bruschetta. It just so happened I had some ciabatta in the freezer as well as onions and tomatoes. So here we go, I sliced the bread and popped it in the toaster for a light toasting. While that was going on I chopped the tomatoes and onions, mixed them up with a little garlic and olive oil. I Popped the bread out, slapped on the tomato and onion mixture and settled down to eat. It was wonderful.

It was so good I decided on another Italian favourite for the second course. aglio olio peperoncino. It’s basically spaghetti with olive oil, garlic and chilli. What could go wrong with that?

The quick answer is everything, overdone spaghetti, burnt garlic and those chillies I used last week on a curry that weren’t very hot: this week they were hot!

When is my favourite Italian restaurant opening again?