As the 2020 Formula One season comes to a close, many people must speculate about those who race these amazing F1 cars at such incredible speeds. Measuring high speed lap times against car control and the desire to go ever faster is the juggling act performed by the Grand Prix drivers every time they step into their hi-tech carbon fibre cockpits. The consequences of a mistake can range from an embarrassing spin in the gravel trap to a cruel death. Romain Grosjean crashed in the recent Bahrain Grand Prix. His car split into two and his cockpit, jammed in the crash barrier turned into a deadly fireball. Happily, he escaped with only minor burns.

This year, 2020, marked the twenty sixth anniversary of the death of Ayrton Senna, one of the greatest racing drivers of all time.  Aryton was killed on the 1st of May 1994 at the San Marino Grand Prix at Imola. Anyone who knows anything about motor sport can tell you that. The date lingers in the back of the collective mind of all racing fans, along with other tragedies of the sport, like the deaths of Gilles Villeneuve and Jim Clark to name but two. Clark’s death is unexplained to this day. His Formula Two Lotus left the track at an easy, straight section of road. The facts of Villeneuve’s accident are well known – he crashed into a slow-moving car – but his death is perhaps only really explained under close analysis.

Villeneuve was on a slowing down lap, on his way back to the pits after a handful of fast qualifying laps but still, he kept the hammer down, his right foot pressed down to the floor when there was no real need for absolute speed. So why? Why was he going so fast?

Grosjean escapes from his burning car

One answer is simply that that was the way he drove; fast. Foot down to the floor. Full stop. Another was that he was still estranged from team mate Didier Pironi, who he thought had unfairly beaten him in the previous Grand Prix at San Marino in Italy. The two had diced together for the length of the race, team leader Villeneuve thought they were putting on a show, Pironi thought they were racing. When Pironi took the chequered flag it was an act of betrayal, or so Villeneuve thought and when they arrived at Zolder for what would be Villeneuve’s last Grand Prix, Villeneuve was still seething. And so, perhaps that state of passion was a factor on his last lap. Jochen Mass was slowing down and saw Villeneuve approaching at high speed. He moved over to the right to let Villeneuve through on the racing line but at the same moment Villeneuve also moved to the right to overtake and the two collided sending Villeneuve’s Ferrari into the air.

For Ayrton Senna in 1994 that intense rivalry with a fellow driver seemed to be a thing of the past. Together, Senna, Alain Prost, and Nigel Mansell dominated most of the eighties and early nineties in Formula One racing. Mansell had left the stage for Indycar racing in the United States and Prost had retired, leaving Senna to take his vacant seat at Williams, or perhaps he retired because Senna had been offered a seat at Williams – it depends on which story you believe. Certainly, after the intense animosity that developed between the two at McLaren you can hardly blame Prost for not wanting to work in that same situation again.

So now, the Young Pretender had become the Elder Statesman of Grand Prix motor racing and his two closest competitors had gone. Perhaps he even hoped that he could relax, let up the pace a little bit, just as Prost had thought in 1988 before Senna began to push him harder. But a new phase had begun for Aryton Senna, a new Young Pretender had appeared to challenge him in the shape of Michael Schumacher. Schumacher had won the first two Grands Prix of the year and Senna came to Imola without a single point. “For us the championship starts here” he told the TV cameras, “fourteen races instead of sixteen.” Further pressure mounted on Senna when fellow Brazilian Rubens Barrichello was injured in a crash and then Roland Ratzenberger was killed, the first fatality at a Grand Prix meeting since that of Riccardo Paletti 12 years before.

Many sources have said that after these twin disasters Ayrton did not want to race in the Grand Prix. That is something hard to believe, a man as focussed as Senna, not wanting to race. Could it be that he was finally becoming more like his once deadly rival Alain Prost? Prost had always put his own life before winning motor races and as a consequence had driven a dismal race at the rain soaked 1988 British Grand Prix and completed only a token lap at the similarly affected 1990 Australian Grand Prix. Events may have pushed Ayrton’s thinking from the neutrality and detachment of the past towards a greater concern, a concern beyond the continual winning of races.

Whatever his inner feelings he started the San Marino Grand Prix in his usual fashion, leading into the first corner from pole position. Behind him though, JJ Lehto stalled his Benneton and was hit from behind by Pedro Lamy. Lesser events had stopped races in the past but on this occasion the organisers sent out the safety car and the grid cruised round after it in formation for five laps while the crash debris was removed.

At the end of the fifth cruising lap the safety car pulled off, the lights turned to green and Senna, Schumacher and the rest floored their throttles. The Williams was not handling well and it felt nervous through Tamburello, that evocatively named but most dangerous of corners. Still, Senna kept ahead of Schumacher, he kept the hammer down. On lap six the Williams entered deep into Tamburello and Schumacher saw the spray of sparks as the car bottomed out and side stepped slightly. Senna caught and corrected the Williams and throttled onwards for the charge down to Tosa, the next bend. Both Senna and team mate Damon Hill knew their cars were nervous and to a certain extent unsuited to the bumpy surface at Imola. Someone like Alain Prost might have eased off slightly, settled for second or third, collected some points and used the rest of the San Marino Grand Prix as part of a learning curve, collecting mental and electronic data to develop the car into another Williams race winner. For Ayrton Senna, a third defeat by Michael Schumacher was not acceptable. Putting points on the scoreboard held no interest for him either, except for the ten points that in those days came with a win.

The next time round Ayrton entered Tamburello at 192 mph. We know his exact speed from his car’s electronic management system, which records such data. Tremors went through the car as it bottomed out again on the undulating track surface. This time Senna couldn’t catch the Williams, or perhaps something failed on the car. Later on, the steering column was found to be fractured. Did it fail before the crash or was it damaged in the impact? Some have speculated that his tyres were not up to pressure after many laps circling the track at low speed. We will never know. Whatever happened, the car went straight on towards the tyre barrier masking the concrete wall that lay behind. Senna’s last act was to slow the car down to 131 mph, but it was not enough.

I have never met Ayrton Senna. The last time I had seen him, in person, was at the Silverstone tyre tests of 1991 and even then, he was a blur of yellow in the red and white of his McLaren. To understand someone we have never known is not an easy task. Sometimes we can only do so by looking into ourselves and searching for similar experiences.

A long time ago, I must have been eight or nine, my Mother took me to visit my Grandmother. Sat alone in the lounge while the two women gossiped in the kitchen, I became fascinated by my Grandmother’s new fireplace. It was a coal fire and the fire glowed dormantly behind a glass door. A real fire was not new to me, indeed we had one at home, but the glass door seemed to attract me, so much so that I reached forward and held my hand a fraction of an inch from the glass. On an impulse I reached out further and put my hand on the glass. As you can imagine, I recoiled in agony having burnt my hand. 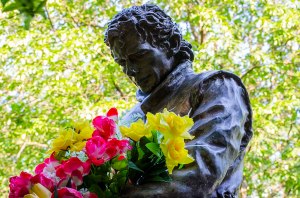 That moment, in 1994, as I watched my television images in disbelief, I came to think of that small boy, reaching out towards the glass door that enclosed a coal fire almost as one with Ayrton Senna, reaching towards the barriers of absolute speed, touching the zenith of his car control and going ever so slightly over his limits. He had done it before and had come back from the brink. Indeed, it may have even been vital to him to occasionally push and go over his limits just to fix in his own mind where those limits lay. Ayrton was a man who could learn from his mistakes and could go on to better and faster things, but on that tragic day fate stepped in and stopped the process. A suspension arm crushed in the impact, sprang back and hit Ayrton, piercing his most vulnerable point, the visor of his helmet.

Prost and Stewart, two of the all-time greats of motor sport, were men who came closer than anyone to touching the glass without ever being burned. Perhaps that was their secret. Stewart was a man in absolute control of his skills as a racing driver, both on and off the track. After three world championships and twenty-seven Grands Prix wins Stewart was able to say goodbye to it all without ever looking back. What other driver can boast of doing that? Schumacher retired again after a disappointing comeback. The careers of both Nelson Piquet and Gerhard Berger fizzled out inconsistently at Benetton. Mansell called it a day after joining McLaren and then realising that their epic run of success had run out of steam. Alain Prost retired after cantering to his fourth championship. It was clear that in Prost’s final year he was no longer willing to push hard. The motivation of his youth had evaporated with the Grand Prix seasons and with the relentless high-speed sprints of Formula One.

The day had arrived, as it will no doubt one day arrive for Hamilton, Alonso, and Vettel, when he was no longer trying to touch the glass.

This is an edited and updated version of a previous post which as you may have correctly guessed means that this week I was running out of ideas for blogs. Normal service might be resumed next week.