The F1 season starts later this month in Bahrain, in fact the race teams are already gathering there for the pre season testing, getting ready to shake down the new cars and sort out any teething issues before the actual racing. Of course, I’m assuming that despite Covid 19 we will have something of a normal F1 season once again. One of my favourite events, the Monaco Grand Prix traditionally takes place in May and even though the hi tech F1 cars outgrew this road circuit many years ago, they still come here and race fans can hobnob with the rich and famous and look enviously at the harbour when it will be choc-a-block with millionaires’ yachts.

The other day I was once again going through my old VHS tapes, selecting ones to keep, ones to copy to DVD and ones to throw out. One tape was marked Monaco 2002 qually and I was tempted to dispose of it straight away but I put it to one side and then later when the TV schedules declined to offer up anything interesting I thought why not give it a watch?

I have to say I couldn’t quite remember off the top of my head who was winning and who was losing in 2002 or even who was driving for who.

The video started off talking about what was portrayed as a controversial event in the previous race in Austria. Michael Schümacher and Rubens Barrichello were both driving for Ferrari at the Austrian Grand Prix. Rubens, the popular Brazilian was fastest in qually, fastest in the warm up and led the race. At the very last corner he came out ahead of Michael but then lifted off for a moment and it was Schümacher who took the chequered flag. Schümacher and Rubens came to the podium and Michael was not popular, facing a barrage of booing from the crowd. Michael, clearly embarrassed, pushed Rubens on to the top spot but that would not change the result; Rubens had handed the race win to Michael.

I started to fast forward through the TV ads but then saw one that always used to make me laugh. Here it is:

Back to Monaco and the TV coverage back then had passed to ITV and Jim Rosenthal was the TV anchor. He quizzed pundit Tony Jardine and guest and FIA chief Max Mosley about the Austrian Grand Prix. They weren’t happy at all that Rubens had handed the win to Schümacher. Are they bringing the sport into disrepute asked Jim. Max and Tony seemed to think so. The ITV web site was apparently flooded with complaints. Some drivers were interviewed and one I thought was interesting was the comment by Jacques Villeneuve. He said that we all knew that Ruben’s contract said he was number 2 and had to give way to the number 1 driver who was Schümacher. We all knew also that in Schümacher’s contract it said that the number 2 driver had to give way to him so why should we be surprised at what had happened in the race? Schümacher said Villeneuve should act like a man, accept what has happened, stand up on the number 1 spot and accept the boos. 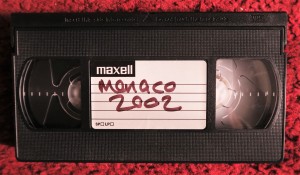 Funny thing is that nowadays, Villeneuve is always in the F1 websites saying something controversial so perhaps I’d forgotten he was a straight talker even back then. Yes, that whole episode was a big scandal back in 2002 although I really don’t know why. Motor racing is a team sport and Ferrari has always been known to give team orders so why was everyone getting upset? Even Stirling Moss, who drove in an era when team orders were pretty much de rigueur felt compelled to say he had lost respect for Michael Schümacher. The thing is, as the two had led the race and Michael of course knew that Rubens would move over, then the two were hardly racing were they, as Ferrari Team Boss Ross Brawn pointed out. If there had been no team orders then Rubens would have had Michael up his exhaust pipes pushing him until he found a way past. To me the whole thing was a fuss over nothing but as I remember, the whole thing rumbled on and on for quite a while.

Anyway, I soon fast forwarded to the action, the actual qualifying which was I have to say, pretty exciting. There was a time when, as an ardent F1 fanatic, I knew race results and team personnel off by heart. Who won at Monaco in 1970? Jochen Rindt of course. 1971? Jackie Stewart. 72? Jean Pierre Beltoise in the rain. What about 1977? Was it Lauda? No, Jody Scheckter. 86? Prost? Yes, Alain Prost. 2002? 2002, there’s a question.

Time to fast forward again but then another advert caught my eye. I haven’t seen it for years but I’ve always found it rather funny. It starred the northern comedian, Peter Kaye.

Getting back to the qually; as I said before, it was all pretty exciting, especially as I couldn’t remember who was driving for whom, never mind who came out on top. Schümacher soon set the top time then David Coulthard driving for McLaren went fastest. Hakkinen his team mate, who was as you may remember, a double world champion, wasn’t doing so well but then Juan Pablo Montoya, one of my favourite drivers claimed the top spot. The cars began to get faster as the track ‘rubbered in’ and got faster. Coulthard went fastest again, in fact there were ten changes of pole sitter until Juan Pablo the Columbian driver finally claimed the top spot. I’ve always liked Juan Pablo. He was a man who told it like it was, he didn’t go in for PR led team speak and I was looking forward to seeing his post qually interview but then something happened, something that always used to happen back in the VHS age. 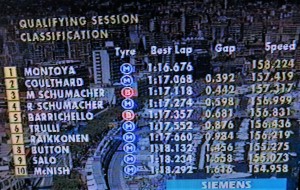 The other day I was idly watching an episode of Everybody Loves Raymond. It was the one where Ray and Debra his wife are watching their wedding video and suddenly the screen dissolves and on comes a football match. Debra is furious because Ray has taped over the wedding. Yep, those sort of things happened back then and on my video tape something similar occurred. The race video vanished into a hail of snow only to be replaced by a James Bond documentary. I was furious for a moment but then I got interested in the documentary. It focussed on Miriam D’Abo who starred in the 007 film The Living Daylights and she interviewed various ladies who had the dubious honour of being a ‘Bond Girl.’ There were plenty of clips from the Bond films, interviews and bits and pieces of behind the scenes stuff, in fact it was all pretty interesting for a Bond fan like me.

Pity about the Grand Prix but what the heck, pause to get a bottle of lager and a few nibbles and who cares? Wonder who did win the 2002 Monaco Grand Prix though?

One response to “Monaco, TV Ads and the Problem with VHS Tapes”