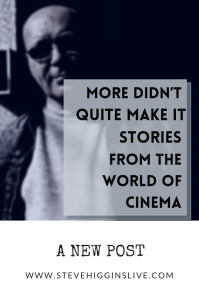 Director David Lean made many classic films and Steven Spielberg famously said that it was Lean who caused him to become a film director. Lean’s most famous film was the story of TE Lawrence aka Lawrence of Arabia. That name, Lawrence of Arabia, was coined by Lowell Thomas, an American journalist who wrote about Lawrence’s role in the desert revolt in Arabia during the First World War.

Lean was fascinated by the subject and various scripts were produced, the final one by Robert Bolt, but who would play the enigmatic Lawrence? Lean chose a young actor called Albert Finney. Finney was not widely known at the time. He had starred in Saturday Night and Sunday Morning and apparently two days of filming in the role of Lawrence were done before he was either sacked or departed. Other sources say that he filmed an extensive four-day screen test but would not sign a long-term contract with producer Sam Spiegel and so left the production. Not so long ago I watched an interview with Finney on BBC’s Talking Pictures series in which he said pretty much the same, that Spiegel wanted him to sign a seven year contract and he didn’t want to be tied to a producer in such a way.

According to Wikipedia, Marlon Brando and Montgomery Clift were considered for the part before Peter O’Toole was cast.

The film was a huge success and has since been acclaimed as one of the greatest films of all time. It won seven academy awards. Missing out on the role didn’t affect the career of Albert Finney. When he died in 2019 he left behind an impressive collection of film, TV and theatre performances. His last screen appearance was in the 2012 James Bond film Skyfall.

The Tin Man from The Wizard of Oz.

Buddy Ebson is a name you might remember from the TV comedy The Beverly Hillbillies. Buddy played the part of Jed Clampett, the head of a country family which discovered oil on their property, became rich and moved to Beverly Hills. Ebson started out as a dancer and appeared in many Broadway musicals. In 1935 he signed a two year contract with MGM after a successful screen test and made his film debut in Broadway Melody of 1936. In 1939 he won the part of the Scarecrow in the Wizard of Oz but swapped parts with Ray Bolger who wanted to play the Scarecrow rather than the Tin man. Ebson recorded all his songs and worked through the rehearsals but during filming became very ill. It was found he was having an allergic reaction to the make up used for the Tin Man and Buddy was unable to continue. Jack Haley took over the role and the make up was changed to something safer. According to Wikipedia, they didn’t bother to tell Buddy that the make up had caused his problem until much later.

Clemenza from The Godfather.

Sometimes an actor plays a great part in a film and then when the time comes for a sequel, he tries to use a little leverage to get a better deal. In the Godfather, Richard S Castellano plays the part of Clemenza, one of Don Corleone’s Caporegimes. A Caporegime is a sort of captain in the mafia who heads a team of ‘soldiers’. He plays a pivotal part in the original film and it is clear by the film’s end he is one of new Godfather Michael’s most trusted lieutenants.

When it came to Godfather II, Castellano wanted more money as well as wanting to write his own dialogue. According to a post I found on whatculture.com Castellano was the highest paid actor on The Godfather. Brando was considered pretty much washed up before the Godfather and had to do a screen test to get the part. Al Pacino was a complete unknown and James Caan and Robert Duvall were not well known at the time whereas Castellano came straight to the project from an Academy Award nomination. For Godfather II, having an actor write his own dialogue was a complete no-no for director Francis Ford Coppola so the character was written out and a new character, Frank Pentangeli was brought in to take Clemenza’s place.

All The Money in The World

Here is one final story concerning an actor. It is slightly different to the ones above as the actor concerned was hired for the role, he played the part, the film was completed and ready for its première and then they cut the actor out. They then recast the role and added the new actor. The actor concerned was Kevin Spacey and he appeared as J. Paul Getty in the 2017 film All the Money in the World. The film was directed by Ridley Scott and is about the kidnapping of Getty’s grandson and Getty’s refusal to pay the ransom.

After completion of the film various allegations of sexual misconduct appeared against Spacey, notably one by an actor called Anthony Rapp, who claimed Spacey had made sexual advances towards him when he was only 14. Spacey responding by apologising and saying if he had acted in that way his behaviour would have been deeply inappropriate. However more complaints against Spacey came forward and TV producers of the series House of Cards dropped Spacey from the show. It seems that the producers of All the Money in the World must have been getting nervous about their production and the possibility of Kevin Spacey spoiling their box office takings so director Ridley Scott engaged Christopher Plummer to play the part. A partial reshoot of Spacey’s scenes were done with Plummer, the film was re-edited and Spacey was out and Plummer was in.

Kevin Spacey has not worked since but I did notice an article in the news that he had been signed to play a detective in a film directed by Franco Nero.

David Lean had been inactive as a director since the poor reception of his film Ryan’s Daughter. He was apparently so upset over the critics dislike of the film that he had not made another film until his adaptation of E.M. Forster’s A Passage to India in 1984. That and the restoration of his classic Lawrence of Arabia, in which around 35 minutes of cuts had been edited back into the film had put him back on top of the film business.

He started pre-production on various projects in his final years. One was a version of Mutiny on the Bounty. Lean dropped out after his preferred screen writer Robert Bolt suffered from a stroke. Star Mel Gibson brought in Roger Donaldson as director and the film was finally released as the Bounty.

Lean also began work on Empire of the Sun which Steven Spielberg took over when Lean again dropped out.

David put together a stellar cast for Nostromo including Marlon Brando, Paul Schofield and Peter O’Toole. Spielberg wanted to work with his directorial hero and signed on as producer but Lean wasn’t amused when Spielberg criticised the screenplay.

Lean once again turned to Robert Bolt who had recovered somewhat from his stroke and rewrote the screenplay. Not long ago I finished Sarah Miles’ autobiography. Sarah was Bolt’s wife and she tells how Bolt and Lean began to work together again and the many meetings they had in Lean’s impressive London home. Lean had bought two warehouses in a street near to the Tower of London. He knocked one down to create a lovely garden and the other he and his wife transformed into a wonderful riverside home. There, the two worked on Nostromo. The novel was written in 1904 and is set in South America. A man called Nostromo helps hide the silver from a mine which is then used to prop up the government which the mine owner, Charles Gould, believes will bring stability to the region.

I’m not quite sure what attracted Lean to the project but he was extremely keen on the story and worked hard to complete the film. Numerous storyboards were made for the project which Lean wanted to shoot on 65mm film. The budget grew to $46 million.

David Lean sadly contracted throat cancer and became very ill just before the cameras were ready to turn. In her book Sarah tells of a phone call from set designer John Box talking about the sets that had been built at Pinewood Studios, ‘Those sets’ he said to Sarah, ‘my best work ever.’

The sets were never used. Lean passed away on 16th April 1991. He was 83 and without him, Nostromo collapsed.

There is an interesting documentary film to be found about the production of Nostromo, here is a clip I found on YouTube:

2 responses to “More ‘Didn’t Quite Make it’ Cinema Stories”