Many years ago in my mid-teens I was in Manchester doing pretty much what I have always done, then and now, whenever I have free time on a Saturday, either looking at records in a music store or looking at books in a book shop.

In 2014 there are not many record stores left; the whole culture of buying records is a different ball game these days, downloading instead of taking home a hard physical copy. Anyway, that’s a whole different blog. To get back to this one, back in that record shop I’d thumbed through the discs, checked out all the cheap records and then began flipping through the posters. This must have been mid-seventies so the posters were people like David Bowie, Marc Bolan, Elton John, Rod Stewart but there was one poster of a man in his mid-twenties wearing a white tee shirt and jeans. He was pulling a moody sort of look but there was something about him that was interesting. Anyway, he turned out to be an actor that I’d never heard of and the shop assistant pointed out a book about him in the store, a paperback, so I picked it up and read about the actor’s life. He was called James Dean. 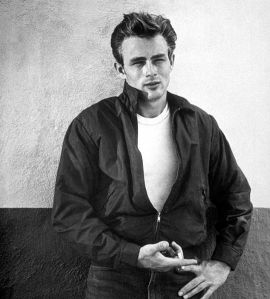 Dean was born in Indiana and his mother died of cancer when Dean was only nine years old. There is a haunting passage in that paperback I bought that tells of how Dean’s father, Winton, sent little Jimmy Dean back to his Aunt and Uncle’s home in Indiana on the train carrying his mother’s coffin. Jimmy was brought up in Marion, Indiana by his Aunt Ortense and Uncle Marcus and later went to college to study acting.

His first movie was East of Eden directed by Elia Kazan who had introduced method acting to the American stage and had worked with Marlon Brando in ‘A Streetcar named Desire’. ‘Rebel Without a cause’ was Dean’s next movie. Directed by Nick Ray it is probably Dean’s most iconic film. This is the movie in which Dean wears his famous outfit of red jacket, white t shirt, and jeans.

His third and last movie was ‘Giant’ in which he stars with Elizabeth Taylor and Rock Hudson and plays Texan bad boy Jett Rink. Dean was killed in car crash only days after finishing shooting. He was a keen amateur racer and had bought a new Porsche speedster only days earlier. The car, nicknamed ‘little bastard’ had collided with another vehicle, a station wagon at the junction of route 41 and 466. Dean suffered a broken neck and was declared dead on arrival at a hospital in Paso Robles.

I’m not sure why a council house boy from Northern England should connect so closely with James Dean, an American actor. but back in the seventies Dean became one of my personal heroes. I remember going to a cinema in Oxford road to see back to back showings of East of Eden and Rebel Without a Cause on a very hot summers day. I bought a soundtrack album of those movies too, in the days before video and DVD. Dean was a counterpoint to actors like Richard Burton, he mumbled and mispronounced things. I think that was what I liked about him, he was natural and imperfect. He had an image more rock star than 50s actor. There was a great documentary about him made in the 70s and the music of the times, Bowie and Elton John featured heavily. Anyone remember that eagles track ‘James Dean?’

Well, after writing this quick essay about Jimmy Dean I must find the time to take a look at some of his films again. Did I happen to mention what I bought in the HMV sale not long ago? The James Dean Box set, but I’m sure you had guessed that anyway. .