I don’t know if you ever used to watch that classic TV show The Prisoner. Number 6 played by Patrick McGoohan was trapped in a mysterious village and those who ran the place wanted to know the answer to one question: why did number 6 resign?

They had a saying in the village-‘Questions are a burden to others, answers a prison to one’s self’. The village was a surreal place and number 6 became increasingly paranoid in that sinister, almost sci-fi world and although he came close to answering the resignation question a few times, ultimately, he never did.
The thing is, as we go innocently about our business, there are plenty of people wanting to upset us by asking questions.

There was a time, just after I left school when I thought great; exams over, won’t be answering any more questions like that again. The thing is though, exams of one form or another are sent to try us throughout our life. Trying for a new job is a form of examination, there’s the application form to fill in which is always pretty hard work and if you get through that then there’s the interview to contend with.

Just recently I applied for a job as a team manager and while I wasn’t totally successful I did end up with a temporary promotion, filling in as team manager for two months. Sounded great at first but then there was a whole lot of people management and paperwork that I didn’t realise would be so hard, or so time consuming. No more quiet moments in which to churn out my blogs!

Still, this recent promotion got me thinking about interviews in the past and where I’d gone wrong. One was an Inspector’s job when I worked for GM Buses. The job I wanted was a post at Hyde road depot which was only ten minutes away from my home. I didn’t have a car but there was a great bus service so it would have been perfect. There were two Inspector posts available, one at Hyde road and another at our Tameside depot in Rochdale.
During the interview in which I thought I’d done pretty well, the three interviewers asked me to step outside. I returned a few minutes later and they asked me, “Steve, what would you say if we offered you the Rochdale Inspectors job?”
Well, that was the job I didn’t want. I wanted the other one, the one that was only ten minutes away and another thing, at the time I didn’t have a car so how could I get to Rochdale? So what did I do? Well, I’m sure you can guess. As usual I took the worst possible option: I turned them down!
Even as I walked away I knew I’d done the wrong thing and every time I have an interview I think of that moment. Still, in a way that’s a good thing. Remember the mistakes you’ve made and move on. Do the right thing next time. Be positive.

Another time I applied for a job at Manchester Airport. It wasn’t a great job but it looked interesting and I hoped I might have passed the interview but it floundered when the interview veered off into an odd direction.
“How will you get to work?” asked the interviewer.
“By car.”
“But what if your car breaks down?”
“Well, I could always use the wife’s car.”
“But what if she needs it for work?”
“Well, I could get the bus.”
“But you might have to start work at 5 in the morning.”
“Well the first bus from Stockport is 04:15 in the morning.”
“The buses don’t run that early.”
“Yes they do, I know as I currently work in bus timetable enquiries.”
“Well suppose they are on strike?”
“Well I’d have to go on my bicycle.”
“What would happen if you had a flat tyre?”
I paused for a moment then asked: “Are you joking?”
Needless to say, I didn’t get that job either. I didn’t understand the interviewer’s line of questioning at all and a little frustration had crept in to my answers.

Now, in the 21st century questions are a part of life. They come at you when you are least expecting them. This morning, I was trying to get ready for work and the phone started ringing so I ran through to the lounge to pick it up. The caller said, “Good morning? Is that Mr Higgins?”
“Yes, speaking.”
“Mr Higgins, do you own your own home?”
“Excuse me?” I ask.
“Do you own your own home?”
“None of your business” I answered as I put the phone down, rather offended at this intrusion into my private life and not only that, I’d put my toast back in the toaster as it wasn’t quite done enough and when I legged it back to the kitchen it popped up black and burnt! Not happy!

When I was younger and working in city centre Manchester I used to spend my lunchtimes either in a pub somewhere down Oxford road or sometimes I’d sit in St Peter’s Square if it was nice and sunny and eat my sandwiches there. The annoying thing was I’d usually have to run a gauntlet of canvassers asking me questions.
“Excuse me, if I told you of a new bank account that would save you money would you change accounts?”
“No, I wouldn’t.”
“You wouldn’t? Why not?”
Nowadays I’d just say ‘none of your business’ but back then when I was young and polite I’d tend to try and justify myself and say why I was happy with my bank and why I didn’t want to change and so on. If I had been number 6 I’d have probably said ‘I will not be pushed, filed, briefed, debriefed or numbered!’
As it was, by the time I’d got rid of the interviewer that would be half of my dinner break gone! 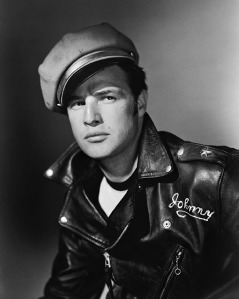 Perhaps my old school friend Clive Hornchurch (once again, names have been changed to protect the innocent!) felt a certain amount of frustration too. He was by far the brainiest lad in the school and was constantly upheld as an example to other pupils. I remember once Miss Tyass, our history teacher telling me how hard I would have to work to pass the History O-level and perhaps I should use Clive’s notebook to revise from because he himself wouldn’t need it!
Yes Clive was the man; every teacher knew he would pass with flying colours and perhaps be off to university, if such a thing was possible from our urban jungle roughhouse comprehensive school.
On the day of our O -level examinations Clive added his name to the top of his paper, and then put down his pen. His blank test paper was passed in and naturally he failed. I often wonder what became of him and why he did what he did. Perhaps he was frustrated; perhaps he was tired of being held up as a shining example of all that is brilliant in a school boy. I sometimes wonder if I had asked him what he was rebelling against would he have answered, like Marlon Brando in The Wild One; “What have you got?”

My brother sent me a text a few days ago, it read simply ‘You don’t remember me do you?’ Probably a little confusing to the man on the street but I knew exactly what he meant. I responded with; ‘I remembered you the moment I saw you!’ My brother texted  back straight away; ‘By the nose huh?’ The thing is, my brother and I are movie buffs, or to be more accurate, classic movie buffs and we sometimes text in movie dialogue.

I replied with ‘Definitely!’

Picked up on the movie yet? Well that it’s one of the great motion pictures of all time. It starred Marlon Brando in an Oscar winning performance, much better, much more exciting and above all, much more human than his other Oscar winning role in the Godfather. Here are  some more text clues;

My Brother: ‘What did that man mean just now?’

My Brother: ‘He’s just a juice head that’s hangs round the neighbourhood, don’t pay no attention.’

Another text read ‘Some people have faces that stick in your mind.’ And some movies have dialogue that can stick in your mind too, especially if you like your movies in black and white and served with a large helping of classic. 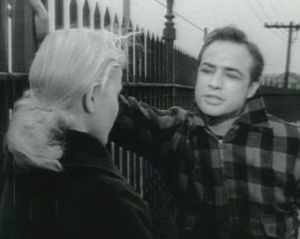 The movie was ‘On the Waterfront’ and it’s probably famous for the double act of Marlon Brando and Rod Steiger playing brothers but there are plenty of other wonderful performances and scenes. My personal favourite is when Brando and Eva Marie Saint walk together in the park and Eva drops a glove which Brando picks up but keeps hold of and eventually pulls onto his own hand and we know that Eva wants it back but, well watch the movie, believe me it’s a great scene.

My brother and I do text each other a lot but we also chat on the phone too. The thing is though; we tend to talk on the phone with East European accents. We starting doing it one day then began a sort of unspoken contract to carry it on. Sometimes I’ll get a call and he might say, in his best Hungarian accent ‘ Gut Evenink my friend.’

‘Gut evenink to you also my friend’ I tend to reply. It’s fun but sometimes I get odd looks, especially if I’m in Sainsburys or at the bar of my local pub. Which brings me finally to another text he sometimes sends; ‘Extraordinary behaviour!’

(In case you didn’t get that one, remember the 1955 movie ‘The Colditz Story’ ? Eric Portman says the line towards the end of the film!)

I hope you enjoyed this post. If you did and want to read more of my work, why not try my book. Click here to go to my Floating In Space page.