Now that the X Files has returned to our TV screens I thought I might just take a quick look at TV spies and secret agents. I’ve always been interested in espionage, and the earliest TV spy show I can remember was the Man from Uncle. In case you don’t remember, the show starred David McCallum as Ilya Kuryakin and Robert Vaughn as Napoleon Solo. It was one of those slick and smooth TV shows from the USA and I even read somewhere that Ian Fleming, the creator of James Bond, had a hand in producing the series format.

Solo and Kuryakin were agents of UNCLE (United Network Command for Law and Enforcement) and used a various array of gadgets in their persecution of criminal organisation THRUSH (Can’t remember what THRUSH stood for!) They had pens that were communicators; ‘open channel D please‘ was something we used to hear our heroes say frequently, explosive devices hidden in the heels of their shoes and I loved every moment of it. The Head of UNCLE, Mr Waverly was played by film actor Leo G Carroll and he worked in a secret headquarters in New York accessed via a dry cleaning store. There was even a spin off series called the Girl from Uncle which starred Stephanie Powers.

They recently remade the Man from Uncle into a big screen movie but looking at the trailer, a lot of the best elements were not there; the music, the suave Robert Vaughn, the boyish David McCallum. To be fair I should save my judgement until I’ve seen the film but can you really recreate  something like the Man from Uncle on the screen, years later? I’m not so sure.

In the sixties and seventies there were plenty of crime and espionage series, things like The Avengers with Patrick MacNee as John Steed and his lovely sidekicks Cathy Gale, (Honor Blackman) Emma Peel, (Diana Rigg) and Tara King (Linda Thorson.) The Avengers was a thoroughly British tongue in cheek espionage show which was revived in the eighties as ‘the New Avengers‘ with Joanna Lumley as Steed’s new assistant, Purdey. Back in the sixties though there were other shows like Danger Man with Patrick McGoohan and the Prisoner, which was a sort of secret agent show with a twist. It starred McGoohan as a former agent trapped in a mysterious village. Perhaps he was the character from Danger Man, perhaps not, but those who ran the village wanted information and Patrick McGoohan’s character, number 6, wasn’t ready to give it!

In the 1970’s there was the Six Million Dollar Man starring Lee Majors as astronaut Steve Austin. Austin is injured in a testing accident but as they said in the opening titles, ‘gentlemen, we can rebuild him, we have the technology to make the world’s first bionic man!’ Steve Austin with his bionic legs could run faster than before, see better and hear better because of ‘bionic’ technology and he became a super agent for his boss Oscar Goldman.

In 1979 the BBC produced a TV version of Tinker, Tailor, Soldier, Spy, the novel by John Le Carre. A little slow and at times even tedious, it was a view of the other side of the spy world: Shabby men in overcoats and rain macs. The thankless tasks of checking files and sifting information to find a ‘mole’, an agent in the UK working for Moscow centre. The series was remade into a feature film in 2011 which I found rather dull although plenty of great reviews of the film can be found on the internet.

In the 90’s US TV brought us the X Files, a mix of spies, espionage, crime and sci-fi. Personally I rather liked the series but I always had the feeling that the writers had written themselves into a sort of hole and didn’t know the way out. What was the big alien secret? Who was the cigarette smoking man? Yes, I don’t think the writers ever knew. My all time favourite episode of the X-Files was a two parter where agent Mulder is somehow morphed into the body of a CIA man and the CIA man morphs into Mulder’s body.

In 2001, a new fast moving spy drama hit the TV screens; 24. I loved 24 with its  high tech control rooms and the ease at which staff members sent maps, CCTV images, Satellite pictures, and all sorts to Jack Bauer’s gadgets. The idea of 24 was that a complete story covering a full twenty four hours was told in real time, each episode being an hour of the day. Funny though, no one ever had a sleep in those twenty four hours!

Recently I picked up a DVD of the US series Homeland. It was season 1 when UK TV is just showing season 4 and the series was fantastic. Great acting, some tight direction. Excellent camera work and some really taut and intelligent writing. It’s more of a psychological drama than an action series and I love it. The only problem is I’m three series behind. Do I wait for re-runs or do I get series 2 on DVD?

Anyway, getting back to the X-Files, what do you think of new 2016 series? All the original stars are present, it was made by the original production team and even used the same opening titles so you’d think the result would be pretty good. Actually Mulder looks a little tired. Scully isn’t quite so alluring as she used to be and the first episode seemed to play up all the aspects I didn’t like about the original, especially the ‘conspiracy’ and ‘alternate government’ paranoia stuff. I wasn’t hooked enough to watch episode 2 but wonder of it’s worth doing a quick ebay search for the Man from Uncle on DVD. 1960’s version, of course!

If you liked this post why not try my book Floating in Space? Click the links at the top of the page for more information or click the picture below to go straight to amazon. 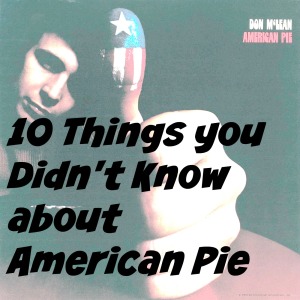 Well, here’s the first thing that perhaps you didn’t know; The lyrics to American Pie, or more correctly, writer Don McLean’s sixteen page original draft of the song was sold recently at an auction in the USA for 1.2 million dollars, that’s £806,000 for us here in the UK. That’s a hell of a lot for a few song lyrics but to be fair, American Pie has the most interesting and fascinating lyrics of any pop song ever.

American Pie debuted in 1972 and reached number 2 in the UK charts. I didn’t really get interested in music until 1973 when I started buying singles but also, in that same year, a magazine was launched in the UK called ‘the Story of Pop’ and in one of the issues there was a lengthy article about the song and what it meant and ever since then I’ve been fascinated by the lyrics and what they may or may not mean.

The day the music died

This is generally thought to refer to Buddy Holly’s sad death in 1959 at the age of 22. Holly was only at the beginning of his career and would have gone on to greater success. Even so, he was inducted into the rock n roll hall of fame in 1986.

The Jester is Bob Dylan and the coat he borrowed from James Dean can be seen on the cover of Dylan’s album ‘The Freewheelin’ Bob Dylan.’

The King is of course the King of rock n roll, Elvis Presley, and it was his crown that the Jester stole when the King was looking down.

The beginning of the song looks back to a golden time for Don McLean, the fifties and the birth of rock n roll and artists like Presley and Holly. The sixties gave birth to a new freedom for young people and it was expressed in music and in the use of drugs like marihuana. No wonder the ‘half time air was sweet perfume!’

The Sergeants played a marching tune

The Beatles are the Sergeants, fresh, no doubt, from their Sergeant Pepper album.

I saw Satan laughing with delight, the day the music died

Jack Flash is the Rolling Stone’s Mick Jagger and it is he that McLean sees as Satan. ‘No angel born in hell could break that Satan’s spell.’

This part of the song refers to the Rolling Stones’ concert at Altamont Speedway in northern California. The event was a free one and was anticipated as a sort of ‘Woodstock west’. Various bands played including Santana, Crosby, Stills and Nash, and The Grateful Dead. The fans however, were stoned on drugs and drink and the atmosphere deteriorated, so much so that the Grateful Dead declined to play. The local chapter of the Hells Angels motorcycle gang were hired, supposedly, to take care of security but they later denied this and said they had been promised $500 dollars’ worth of beer merely to keep people away from the stage.

During the concert a fan by the name of Meredith Hunter was killed by a Hells Angel. Hunter had tried to get on the stage during the Stones performance and the Hells Angels had pushed him away. Hunter returned and pulled out a revolver from his jacket. Hells Angel Alan Pissaro charged Hunter; pushed the gun aside and stabbed him. The incident was caught by a film crew which helped Pissaro’s self-defence plea later on in court. Pisarro was acquitted. The clock had turned full circle from the innocence of the fifties to the disillusionment of the late sixties and Don Mclean’s classic song is a wonderful and lyrical evocation of the times.

Click on the video below and enjoy American Pie for yourself.