As a child growing up in the 1960’s one of my favourite television programmes was Tomorrows World, a BBC show about technology and the future. I was acutely interested in science, science fiction and all things related to the future. The future was hi-technology, gleaming metal and plastic cities, hover cars, and space travel. The movie 2001 A Space Odyssey predicted manned missions to Mars, powerful computers, and lunar space stations. But, 2001 is now  thirteen years ago, so what happened? Why is 2014 not really that much different from 1968?

Movies like 2001, produced in 1968, were made in the sure knowledge that the incredible leaps in manned space flight made since 1960, and the technology that made it all possible, would continue. How wrong they were. When Neil Armstrong stepped out onto the surface of the Moon in 1969 the space race was over. It was a case of mission accomplished and the Apollo programme was cut short when Apollo 17 made the last manned trip to the Moon. To a great extent, space exploration, or at least manned space exploration stopped there. Space travel had become too expensive even for the Americans. The NASA space programme continued with Skylab and the development of the space shuttle, but none of those projects went further than orbiting the Earth, and that feat had been accomplished easily on the Mercury and Gemini programs.

Take a look at your kitchen and think to yourself how different is it from the kitchen of thirty years ago? Apart from advancements in electronics, probably in the form of your microwave and your freezer, the answer is not much. Step back further and look at your home. Are your living in a gleaming metal and plastic ‘future home’ or is it a modernised terraced house. Terraced houses are over a hundred years old but many people live in them happily today. Differently from our counterparts of a hundred years ago of course. Bathrooms have been added, and extensions with kitchens and indoor toilets, but terraced houses all the same.

Many writers and film makers have chosen to look at the future as a separate place altogether from the present and this has been their mistake. The future is the continuation of the past. Cities, homes, society itself is all an evolution of what has gone before.

Heathrow Airport was recently in the news because of protests about a possible new runway. New Runway? Why is a runway even necessary when the Harrier Jump jet has been taking off and landing vertically since the 1960’s? The answer is two words, arrested development. Perhaps VTOL has suffered, like Concorde, in not being American. There is no doubt in my mind that had Concorde been an American aircraft instead of an Anglo-French craft the skies above us would have been substantially populated with supersonic passenger aircraft. The United States is the land of opportunity, especially commercial opportunity. The space programme of course was also American but perhaps commercial exploitation in visiting the moon was limited. The great technological advances in the last thirty years have come in computer orientated technology that is full of commercial applications like, pc’s, laptops, tablet computers, mobile phones, and of course the internet.

Having a book published has been the dream of many people, including me but today, with the advent of internet technology, that dream is easy to realise. My Book, ‘Floating In Space’ is one that I have been working on, off and on, for thirty years. I found it, uncompleted on an old disc, reacquainted myself with it, finished it off and now you can read it as a kindle e-book available on amazon. There were no meetings with publishers, no discussions, no chats with an editor, no re-writes. It was just a case of upload the files, proof read then press a button and it’s live on-line. 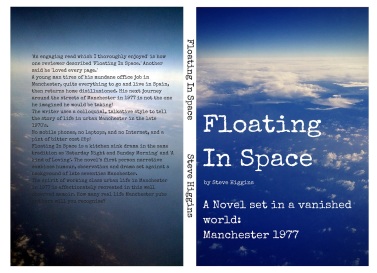 That of course has its drawbacks. As a writer I have discovered a sort of word blindness when it comes to my own work. I’ve proof read my book a multitude of times but how many times have I come to put an extract on this blog only to find missed words and other errors. When the paperback proof version came (in the wrong size: I’d made it far too big!) more errors jumped out at me and my girlfriend Liz, a fully paid up member of the Grammar Police has pointed out so many punctuation issues I sometimes feel like taking it off the market. Anyway, the good thing is that in the digital world, errors can quickly be resolved. A quick update, press the save button and we are all sorted.

Lets see, where’s my ‘Writers and Artists yearbook’? Maybe its time to check out that list of publishers again!