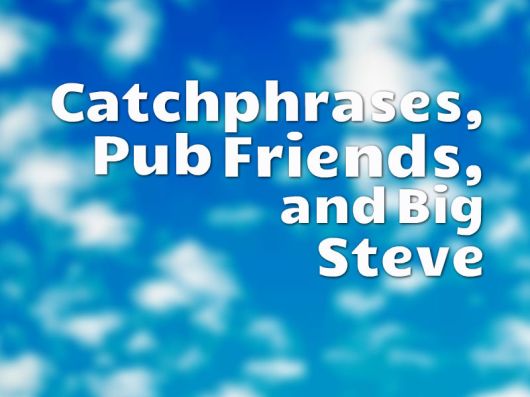 Not long ago at work I noticed something that wasn’t right on the rota so I spoke to our former rota lady about it. She agreed with me, there was a problem but she herself couldn’t do anything about it and I would have to contact the new ‘National Roster Team.’

“Drop them an e-mail.” She said, then added with a giggle. “Tell them you’re not happy!”

Now, at first I don’t think I quite understood that but the other day I had an e-mail from a colleague which was in reply to some procedural point I had raised. The e-mail said something like I’ll sort that out straight away because I wouldn’t want you to be ‘not happy!’

Now, we don’t always notice that something we say habitually has become a sort of personal catchphrase and I’m sure I don’t say ‘not happy’ that much but clearly some people think differently.

Here’s another example of a catchphrase or saying that I always associate with a particular person but first I need to tell you about a pub that Liz and I regularly use. It’s called the Trawl Boat and we both know a lot of people in there. I don’t always know their names but then that’s the thing about pub friends, they’re acquaintances and beyond our pub chatter I don’t know much about most of them at all. Anyway, there are the two guys who always stand at the end of the bar and order double rounds (not sure if that’s a comment on the bar service or maybe they just like their ale!). The thin guy who works for British Aerospace and is not happy (oops, there’s that phrase again! ) about being sent by his company to work on a project in Australia. (Wish my employer would send me off on a project like that! ) Then there’s his colleague with the Kojak haircut and a group that I do know the names of, Colin and Dougie, B&B owners in St Annes and Nick who manages a hotel on St Annes front.

The very first guy we got chatting with in the Trawl boat was a guy we called Big Steve. I’m six-foot and Big Steve towered above me, he must have been six-foot six, easy. He was a pretty fit guy having been a former drayman, one of those people who lug big beer barrels about for a living and he was a really easy fellow to get on with. We always used to sit with Steve and have a drink and a natter and when he was due to leave his would pull his jacket on, say his goodbyes and then always say to us; “Nice to see you both again: As always.” And then he would be off.

A couple of years ago we saw Big Steve sometime in December and as usual at the end of the evening we said our goodbyes, wished each other a happy Christmas in case we didn’t see each other before the holidays and Steve said his usual “Nice to see you both: As always” and left.

We didn’t see Big Steve over Christmas, nor through the New Year period and one day we both said together in the Trawl Boat, ‘wonder where Steve is?’ Anyway we thought nothing of it and assumed we’d catch up with him soon.

Later, Liz was chatting to some of the regulars and one mentioned to her that he had been to a funeral the previous day. Liz asked idly who the deceased was and the man answered that it was someone they didn’t think Liz or I knew. It was a guy called Big Steve who used to be a drayman! Well, the words leapt up and hit Liz like a slap. Big Steve was gone and we’d hadn’t even had a chance to pay our respects at his funeral. I can’t tell you how sad we both felt.

Liz, being the amateur Sherlock Holmes she is, tracked down the widow and we went to see her to pass on our condolences. It turned out that Steve had died quietly in his sleep and his wife went into his room one morning to find him dead. Not very nice for her but a peaceful passing at least for Steve but here’s a thing about pub friends. I don’t have the phone numbers of any of those guys from the Trawl Boat and apart from the guys who own B&B’s I’ve no idea where they live. Luckily, Big Steve had mentioned Nick to his wife as being a hotel manager and one day they had popped in the hotel for a meal and when Big Steve passed away that was the one contact she had for Steve’s pub friends.

One day, in the next world, I’ll make a point of finding Big Steve and I can see myself now tapping him on the shoulder and saying “Nice to see you again Steve, as always.”

Hope he doesn’t turn round and say “Steve, I’m not happy!”

If you liked this, why not try my book? Click the icon below.