I’ll come straight to the point; my favourite movie director? Well, it’s complicated because I’ve got more than one; hence the part 1 in the title, but anyway, Woody Allen is probably my very favourite. Now why a working class guy like me brought up in a suburban council estate in Manchester would relate to the Jewish intellectual New York humour of Woody, well, I don’t know but I just love this guy’s films.

My very favourite moment from one of Woody’s film is probably the one from take the Money and Run when he goes into the bank to rob it and hands a note through the window. The note says “Give me the money, I have a gub!”

“Does that say gub?” asks the bank teller. 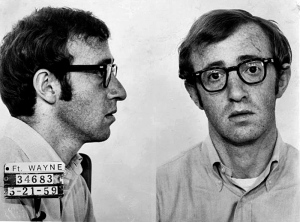 “No that’s gun! I have a gun!” replies Woody and soon all the staff are discussing the spelling and the robbery is forgotten.  That movie was right at the very start of Woody’s career when he was a stand up funny man turned movie maker and as his movies got gradually more serious and more thoughtful, well, I probably loved them even more.

“Chapter One. He adored New York City. To him it was a metaphor for the decay of contemporary culture. The same lack of individual integrity that caused so many people to take the easy way out was rapidly turning the town of his dreams in… no, it’s gonna be too preachy, I mean, you know, let’s face it, I wanna sell some books here. Chapter One. He was as tough and romantic as the city he loved. Behind his black-rimmed glasses was the coiled sexual power of a jungle cat.”

Another Allen movie that opens with a monologue is Annie Hall. His character, Alvy Singer, says: “There’s an old joke. Two elderly women are at a Catskill restaurant. One of them says, ‘Boy, the food at this place is just terrible.’ The other one says, ‘Yeah I know. And such small portions.’ Well, that’s essentially how I feel about life. Full of misery, loneliness and suffering and unhappiness – and it’s all over much too quickly.”

Apart from Woody himself and his casual comedy chatter I’ve always like the look of Woody’s films from the black and white of Annie Hall, Manhattan and Broadway Danny Rose to the full colour Hannah and her Sisters and the jump cuts of Deconstructing Harry. I like the way the camera moves, or really doesn’t move. In Hannah and her Sisters Woody doesn’t follow Michael Caine when he goes into the bedroom and continues a conversation. Why should we? We all carry on long distance conversations with our partners in the bathroom or dining room when we are in the kitchen. We don’t need to see the other person, just hear them.

Woody’s films have a natural unobtrusive style which enables you to sit back and enjoy his humour and his observations. Another great Allen movie is Crimes and Misdemeanours. It’s a movie with a dark side but with the same flashes of Allen humour to keep you smiling. Martin Landau stars in the film and gives a wonderful performance. No longer the rather wooden actor from the TV series Mission Impossible or that Hitchcock movie North By Northwest. Here, Landau delivers a thoughtful and human performance and there are lots of the usual Woody Allen touches like returning to old homes and discussing morality then flipping to the next scene where Allen and Mia deliver some more comedy as a counterpoint.

I can’t write a blog about Woody Allen without mentioning Bananas. If I need to cheer myself up, this movie works every time, especially the bit at the end where Woody and Louise Lasser’s wedding night becomes a TV sports event with commentators and interviewers.

It’s almost an ‘in’ joke with Woody about how his older movies are funny and the later ones are not but all his movies have a certain something; not always laugh out loud humour, but some well observed human element. I love Woody himself in his movies which is why it’s a little odd that one movie I can watch over and over again is Radio Days. Like it says in the title, the movie is set in those days before TV when people had their ears glued to the great shows and performers of the time. Woody narrates the movie and we see him as a little boy entranced by a crime show, so much so that his parents take him to see the Rabbi. ‘You speak the truth, my faithful Indian companion’ quotes the young Woody much to the dismay of his parents, not to mention the Rabbi. In some ways I can see myself as a young lad, obsessed with the TV shows of my day and this is the crux of Woody’s films because in many ways he is turning the camera round, and the camera is pointing at us, the viewer.

My love affair with the movies encompasses many genres but when I want to smile it’s usually the Woody Allen DVD I pull down from the shelf.

Hope you enjoyed this post. Click the links at the top of the page to find out more about my novel ‘Floating In Space.’