How easy, or hard, is it to write a weekly blog post? Well there is no straight answer to that. Sometimes I just seem to get a whole host of ideas and other times I struggle to find one. The important thing is to keep jotting those ideas down, the ones that come when you are feeling creative or just full of ideas, and use them on the days when you don’t seem to have anything new.

One thing I try to do is have a few ‘bankers’ as I like to call them. Bankers are fully completed posts that I can use whenever I’m stuck for something to write about and that blog deadline is looming ever nearer. I’ve currently got two bankers in the pipeline and they give me that little bit of reassurance, that confidence that if the current blog goes wrong or is just not working, then the banker is there, ready for my Saturday deadline.

I also have a few ‘potboilers’. Potboilers are draft posts that have been going on for a while and need more work to get them right. Every so often I’ll review the potboilers, update them, do more research and add to them. I have two on the boil at the moment. One is about Oliver Stone and is part of a series about movie directors. The first instalment was about Woody Allen, my favourite director and although I‘ve researched a lot about Stone, and his films are great favourites of mine, the post just doesn’t feel right. It doesn’t have –yet- that personal anecdotal connection I like to have in my posts. The Woody Allen post seemed to just work straight away but then I do so love his movies. I love that balance he maintains between the serious and the humorous, something I look for in my own writing.

Another one is about Watergate, the scandal that erupted around President Nixon in the early seventies. Watergate and the US White House of the sixties and early seventies are two of my great interests but Watergate is one of those things I know perhaps too much about. I wanted to talk about an interesting connection to Howard Hughes that I think explains a lot about the core of Watergate but now I find I’ve produced the War and Peace of blog posts! A little trimming is in order before I publish that one.

One interesting aspect of Watergate was the involvement of the FBI. Nixon wanted the FBI to do his dirty work, to wiretap his enemies and to provide all kinds of dirt on the people Nixon thought were against him. J. Edgar Hoover, the FBI chief, would not help and this was the reason for the creation of the ‘Plumbers’, the covert group who searched for leaks in the government and did Nixon’s dirty work for him. 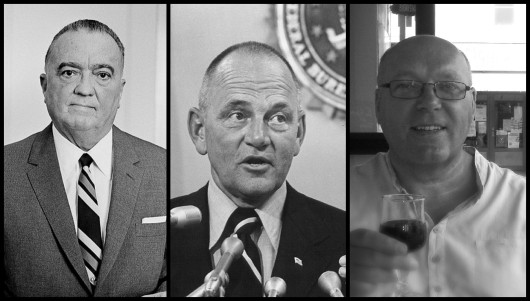 J. Edgar Hoover died in 1972 and was replaced by a fellow called L. Patrick Gray and it has always made me wonder if I became the director, pretty unlikely I know, would I have to be known as S. Ralph Higgins?

The great goal of a blogger is to write something that really takes off and becomes, in internet parlance, ‘viral’. The nearest I have come to going viral was a post I wrote some years ago that suddenly cranked up 192 views in a very short while. All the views originated in Argentina so either ‘Floating In Space’ really rocked their boat down there or there is an Argentinian Steve Higgins who pulls in a lot of Internet traffic!

While I was labouring away last week to sort out the Watergate post I came up with an idea about book trailers and quickly knocked out a post about the making of these video trailers. I always seem to produce something in the nick of time, in fact, that deadline of 10:00 AM on a Saturday morning is good for me as a writer: it forces me to produce the goods. Still, a while ago I had five bankers. Now I’m down to only two!

A few nights ago I woke up in the middle of the night with a perfect blog in my head. I was lying there writing it mentally even though I was still half asleep. It was a cracking post: The title was Blog Heaven. It was all about blogging and writing posts and was full of quirky humour. I knew I’d quickly forget it all so I thought I’d grab my trusty tablet and send myself a reminder e-mail so that when I was fully awake I could crank up my laptop and knock out the post.

Later on I sat down checked my e-mails and saw this:

Sound anything like the post you have just read? Well, it wasn’t half as good as the one I woke up with that other night!

If you liked this post why not try my book? Click the links at the top of the page for more information or watch the video below.