Well, to start with the writing part first. Why write? The answer is easy for me because I’ve always wanted to be a writer, I write for me, for my own personal pleasure and enjoyment and if anyone reads my work, well that’s just a bonus!

I love reading and I love movies and TV, and remember; before a word can be filmed on a movie, we need a script, and scripts need writers! As long as I can remember I’ve always had ideas forming in my head: Scenarios and stories, and I’ve always written them down. My home is full of old notebooks and computer files littered with half started stories and story ideas. When I was a school boy I used to write scripts and always noted down who would play the character on screen but looking back at one of them in particular, I think my producers would have been hard pushed to attract Steve McQueen to play a secret agent based in Manchester!

So there it is; I write because I want to, and because my imagination is at work churning out ideas randomly. Some time ago though, I looked at the things I was writing and felt that in order to be saying something worthwhile I had to turn away from sci fi and espionage and write about the life that was right in front of me, working class life in Manchester and the North West of England. I’ve spun a story in my book ‘Floating In Space’ that was more observation than anything; a northern world from the late seventies recreated not necessarily with accuracy but pretty much how I remember it. Buses with bus conductors, pubs and barmaids, music and beer, and men and women and their attraction to each other. I suppose it’s a bit of a flashback to fiction from an earlier generation. Remember those working class ‘kitchen sink dramas’ from the late fifties and early sixties, things like ‘A Kind Of loving’ and ‘Saturday Night and Sunday Morning’? Floating In Space is similar to those works but set in the late seventies and I’ve tried to recreate the atmosphere of the pubs and bars of those times, especially the busman’s working men’s club, as well as I can.

The answer then is that I like to write, in fact I love writing and as I have said so often before, my blog gives me a taste, be it ever so small, of being a real writer and putting something together every week for my deadline, my one weekly deadline of Saturday morning.
Next question: So why should you buy it? Why should you shell out your hard earned cash to read my book when you can go out and buy the two classics mentioned above straight away for a guaranteed wonderful read?
Well, here are a few reasons:

1. Support new writers! If we don’t support new and up and coming writers then the publishing industry will die on its feet and what are we hungry readers going to read then?
2. The Kindle version is just over a pound so surely it’s worth taking a chance for a measly one pound ten pence!
3. You might just enjoy it!
4. Think about me up there in the rainy north of England! Who is going to support me if you don’t buy my book?
5. Still unsure? Why not go to the Floating In Space page here and check out some more information?
6. Even better, check out this video of me talking about my book!
7. For two unbiased, impartial reviews go to my amazon page here! (No they absolutely were not written by two of my mates who had been plied with alcohol!)
8. For a little taster have a look at this excerpt when two of the characters visit an Oxford Road pub!
9. I’ll be upset if you don’t buy it!
10. After all the months and years of writing, editing and re-editing, would you really deny a new writer the chance to be heard?

Anyway, that’s your ten reasons, so why not buy the book: Click the links at the top of the page for more information! 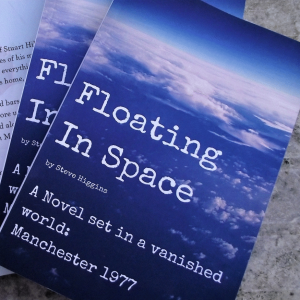