The Problems of a Self-published Writer. 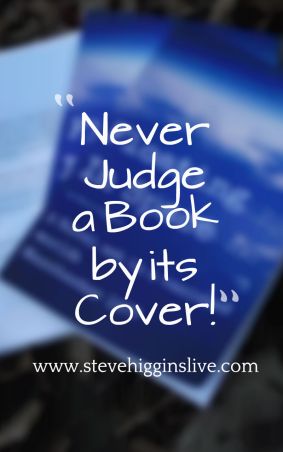 I was at a pub quiz the other week and one of the questions was ‘name an author who has written 723 novels.’ Seven hundred and twenty-three novels. Can you believe that? The answer, in case you didn’t know is Barbara Cartland. She has a place in the Guinness book of records and is known as one of the world’s most prolific authors. At the other end of the scale there is me, Steve Higgins, with my one book, Floating in Space.

I have probably written more words, in my blogs and tweets and other social media posts promoting my book, than are actually in the book itself. Oh well, that is one of the facts of the self-publishing world: Writing a book is one thing but marketing is an entirely different ball game altogether and of course the competition is fierce with more than 5000 new books released on Kindle every day! Is it worth it you might ask? Why do I do it? Well, quite simply I do it because I like doing it and when the enjoyment has gone I’ll start thinking about doing something else with my spare time.

Nothing improves and hones your writing skills more than the writing process itself and as a blogger with a deadline of 10:00 am on a Saturday morning I have even started to feel like something of a professional writer. Nothing gives me more pleasure than to log into WordPress and find someone has liked one of my posts, or better still has left a comment. I’ve always thought that an intrinsic element of the human condition is finding that out that there are others in the world who think the same way as you do and like the things that you like.

I do tinker quite a lot with Floating in Space and some time ago I added a version which hopefully corrected the book’s various grammatical mistakes and I also added a small index to help explain 1977 to my younger readers. Recently I went a step further. I’ve not always been completely happy with the cover of my book. I used the cover designer built into createspace and KDP select to create a cover from various stock elements but I’ve always thought I could do better.

Using the web site canva.com which has a Kindle cover template I designed a new cover using a background photograph I had taken myself. I’ve always envisioned the cover as being a lovely cloud filled sky and the image of a man floating there, hands outstretched. That image is the whole essence of floating in space and although I’d like to explain further I don’t want to give away the ending for any potential readers. Anyway, there is no floating man on the new cover (yet) but there is a rather lovely cloud filled sky. I was pretty pleased with the result so I exported it to Kindle and there it was, working pretty well I thought as my new cover. Take a look below at the old and new versions. 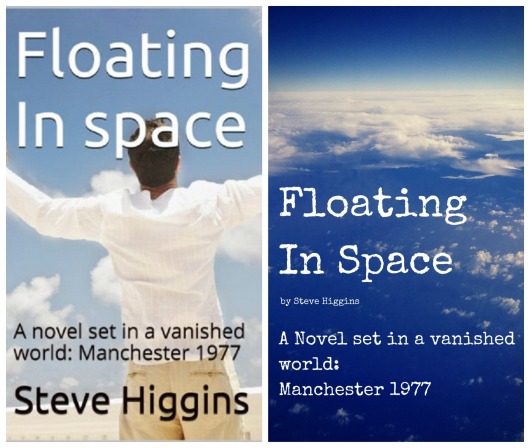 I then added it to my paperback version in createspace and after uploading it I ordered a copy for promotional purposes. Now I’m glad I did that because the book arrived with its smart new cover but I found there was no lettering on the spine and the entire back cover blurb had gone. Now, after some research, I find that to create a cover for the paperback, you have to create a full book jacket including the front and rear of the book! Looks like it’s back to the drawing board for now for the paperback cover!

I’ve had to be a little creative in using the paperback for my web site photos. The one below shows the new version but the one underneath showing the rear cover is the old version! 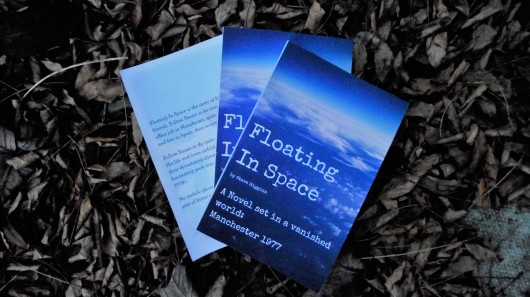 A lot of the videos I have on this site were made at animoto.com and it was great to find I can just edit my original videos, take out photos of the old cover and insert the new one, except of course for shots where I’m actually holding a copy of the book.

Wonder if Hemingway ever had all this trouble!

If you want more information about Floating in Space click the links at the top of the page. Have a look at the updated video below to hear more about the way the novel was written and a little bit of background information:

Update.
I wrote the above post last week and now, after a few days work, here’s the finished cover which is now live on Amazon if you fancy a paperback to read while you while away those dark winter nights. 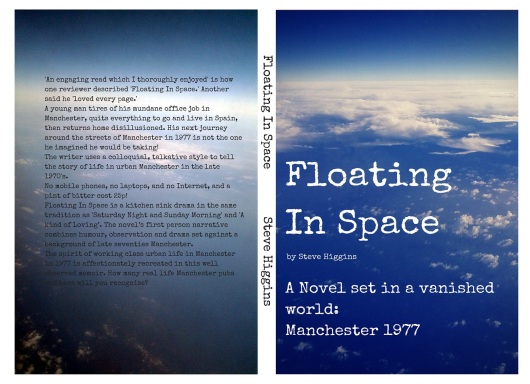 3 responses to “Never Judge a Book by its Cover”