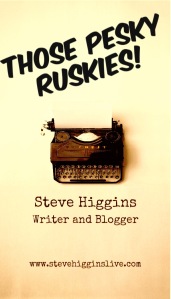 I was watching television today, one of my usual pastimes and I settled down to watch the old 60’s TV show the Saint starring Roger Moore as adventurer Simon Templar. In this week’s episode Templar is sent by British Intelligence to intercept Colonel Smolenko, a top ranking KGB officer who is in danger of being murdered. The murder will be blamed on the British so Templar has to stop it happening and find out who is behind it all.

The colonel it turns out is a beautiful cool blonde of the female variety. She takes some convincing that Simon Templar is out to save her but finally goes along with everything despite Simon being a bourgeois capitalist adventurer. As the action takes place in Paris, Simon decides to show the Soviet era colonel some pretty bourgeois restaurants, bars and western style night life. All of this has an effect on the colonel because at the end of the episode, despite a liquidation order coming her way for Simon, she declines to obey and Simon lives on to fight another day.  Ahh, that old rogue Roger Moore, he did have some charm!

One reason why I’ve mentioned the Saint is because that tongue in cheek 60’s TV version of Russian spies contrasts sharply with recent TV news about the Russian father and daughter involved in the nerve agent attack in Salisbury. The March 4th attack on Sergei Skripal, once an informant for the UK’s foreign intelligence service, and his daughter, Yulia, exposed local people to risk around public places in Salisbury. Traces of the poison have been found at a pub and a pizza parlour visited by the Skripals. Prime Minister Theresa May said in the House of Commons that “It is now clear that Mr. Skripal and his daughter were poisoned with a military-grade nerve agent of a type developed by Russia.” The Russians, naturally deny any such attack. How the whole episode will end is anybody’s guess but as I write this, claims and counter claims are still going back and forth across the media. It seems clear to me though that the Russians, despite giving Communism the boot, are still not fully converted to the ways of the western democracies. Indeed, Mr Putin’s suppression of opposition in the Russian Federation must surely have brought forth complimentary murmurs from Stalin and Brezhnev in the Soviet afterlife.

Mikhail Gorbachev was the man who brought Russia kicking and screaming into the democratic world. He did not end the Soviet era though, in fact what he wanted, I think, was a democratic communist union. That idea though was ruined by Boris Yeltsin who must have smiled inwardly when events brought him to power. Here was the man exiled from the Communist party by Gorbachev who then managed to return to power because of democratic initiatives instituted by the same man. Mikhail Gorbachev made himself President then found the Soviet Union disappearing underneath him. Yeltsin took over the fledgling Russian Federation and Putin, the Russian leader today became Acting President when Yeltsin later resigned. Putin appears to be happy to duck and dive in his attempts to stay in power just like his predecessors of a hundred years ago. 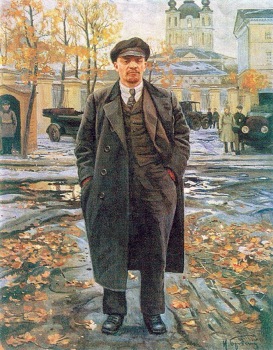 Lenin by the painter Brodskiy

Vladimir Ilyich Ulyanov, better known by his revolutionary alias of Lenin was another man determined to grab power out of the ashes of the Russian Revolution. Winston Churchill described his return to Russia from exile, facilitated by Germany in a sealed railway train, as “like a plague bacillus from Switzerland to Russia.” Lenin presided over the October Revolution and took power from the Provisional Government of Alexander Kerensky. After doing a deal with Germany, Lenin extracted Russia from the First World War and later consolidated his Bolshevik empire by emerging victorious from the Russian civil war. In his later years poor health prevented him from removing his would be successor, a man Lenin felt unsuitable as Soviet leader, and so Joseph Dzhugashvili came to power beginning a reign more terrible than any of the deposed Romanov Czars.  Dzhugashvili of course preferred the alias of Stalin.

Stalin ruled over the Soviet empire until his death in 1953. Even as he lay crippled by a stroke his aides were too scared to move him in case they incurred his displeasure. It was Khrushchev who finally emerged as Stalin’s successor, consigning potential successor security chief Beria to imprisonment and death. Khrushchev initiated a number of reforms in the Soviet Union, opening up the gulags and freeing prisoners but he became increasingly unpopular with his colleagues in the Politburo until he was finally removed in favour of Brezhnev in 1964.

The coup was a quiet and bloodless one, Khrushchev later commenting “I’m old and tired. Let them cope by themselves. I’ve done the main thing. Could anyone have dreamed of telling Stalin that he didn’t suit us anymore and suggesting he retire? Not even a wet spot would have remained where we had been standing. Now everything is different. The fear is gone, and we can talk as equals. That’s my contribution. I won’t put up a fight.”

Ian Smith, the Prime Minister of that long vanished country Rhodesia once said this about democracy: “Democracy is a very delicate thing, perfected by the British, but that does not mean you can transplant it elsewhere.” In some ways, especially when you look at the Middle East, perhaps Smith was right, after all the fundamental thing about democracy means that those who are defeated at election time are obliged to hand over power to the newly elected winner. Some people, President Mugabe for example, were not inclined to do so or to even allow anyone to challenge them. Still, everyone votes for a dictator, or so they say.

As it happens, I have met a few Russian people. Back in my coach driving days, I drove a coachload of Russian shop stewards to various meetings with UK union representatives of British gas. I’m not sure what they were discussing but they all seemed pretty nice. In fact later on, they complained to their hosts that I was sitting on my coach, reading a book and eating sandwiches, when they were being wined and dined in a swanky hotel. This inequality so disappointed them that they insisted I come inside and be served the same lovely meal that they were served. Very nice it was too!

Surely then, wasn’t Ian Smith being just a little snooty? Don’t those same Russians deserve the same democratic rights that we tend to take so much for granted in the west?

What is the situation in the Kremlin today I wonder? Will anyone dare to tell Mr Putin that he doesn’t suit them anymore?

Steve Higgins is the author of Floating in Space set in Manchester, 1977. Click the links at the top of the page for more information!