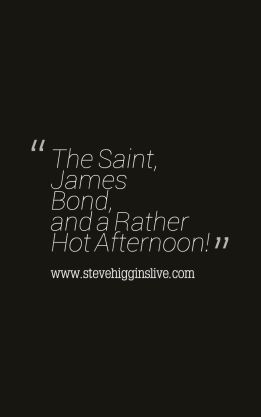 I spent a lot of time last week trolling through my book collection and photographing the books for last week’s post about Marilyn Monroe. It wasn’t quite that easy because since my divorce my books have been boxed up in the spare room at my Mum’s house and it took me a while to search through the boxes and find the books I wanted. The other problem was that being a bit of a book fanatic, I kept coming across books I’d not read for ages or forgotten about and my original task was put on hold while I sat and started reading! I came across my James Bond book collection and as you will know from reading these posts I do love James Bond.

One of the Bond books I found was ‘Live and Let Die’. It’s not one of the best in the book series but it’s pretty good. Roger Moore played Bond in the movie version, in fact it was Moore’s first Bond movie and I have to say, Roger just didn’t do it for me as Bond. He just didn’t look the part unlike the previous 007, George Lazenby, who completely fitted in with the Bond of my imagination.

Sadly, Lazenby listened to some poor advice which advised him that secret agent espionage films were on the way out: They weren’t, but it turned out Lazenby was. Sean Connery filled in for one more Bond film, Diamonds are Forever, until Moore took over on Live and Let Die.

I have always loved that opening sequence in the Saint. You know, the bit where he meets some pretty girl, something happens like an attempted robbery or something, Templar saves the day and the girl says, ‘aren’t you the famous Simon Templar?’ Moore then looks up, raises an eyebrow, a halo appears and then we cut into the theme tune and the opening titles.

Funnily enough, The Saint is currently being reshown on ITV4 during the day and as I have come into possession of one of those freeview digital recorders it’s so easy to record all the episodes. Just a touch of the series link button and there they are, queuing up on the hard drive waiting for my viewing pleasure.

I started watching one today; it was an episode about an actress who is what they call today a ‘diva’. The Saint was invited to watch some filming by his old friend Lois Maxwell who would one day play Miss Moneypenny to Moore’s James Bond. The actress threw a bit of a wobbler and retreated into her caravan which was then hijacked right out of the studio and the actress held to ransom. I’m not sure how the episode ended because it was so hot (Tuesday as I write this) I had to get outside for some fresh air.

That’s the thing about the UK. You know how it is -once a year the temperature in Manchester is higher than in Barcelona and the newspapers suddenly revert from Celsius to Fahrenheit because 100 degrees is so much more exciting than 37.7!

The other thing is that in Spain, if it’s too warm you automatically go indoors, because indoors in Spain is so much cooler. In the UK it’s the opposite, it’s warmer indoors!

Looks like I’ll just have to wait for a much cooler evening to find out what happened to the Saint and the actress!

If you liked this post, why not try my book, Floating In Space? Check out the links at the top of the page for more information or click here to go to my Amazon page! Why not take a gander at the video below and hear the author talk about the openeing paragraphs?

9 responses to “The Saint, James Bond, and a Rather Hot Afternoon.”